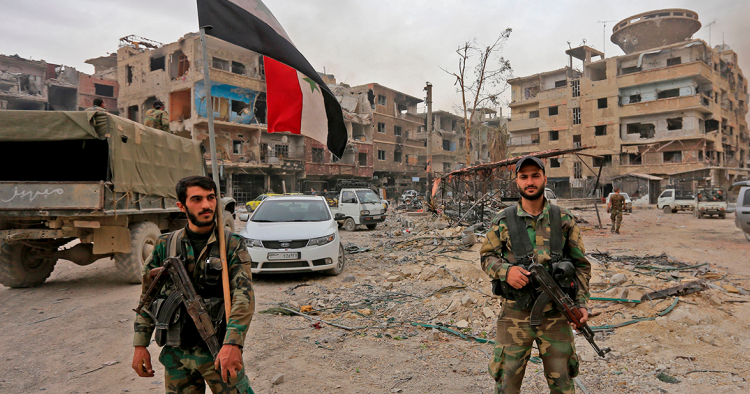 The current Russian invasion of Ukraine has brought to international attention one of the sad new realities of Syria: Any war involving Russia or Turkey is likely to involve the use of Syrian “mercenaries” as cannon fodder. Both pro- and anti-regime Syrians have fought under the Turkish and Russian flags in Libya since early 2020, while Turkish-backed Syrian rebel factions sent members to fight in Azerbaijan in late 2020. As the most recent Russian advance into Ukraine stalled, rumors quickly grew that the Russian army would deploy Syrians once again.

Yet most of the reporting on Russian recruitment in Syria has involved half-truths, if not outright lies. While it does appear that some Syrians have signed contracts to fight in Ukraine, there is no guarantee these fighters will actually be sent there. The coverage of this topic has also missed a key aspect of who would actually be involved if Syrians really do deploy to Ukraine. Above all else, there has been a lack of understanding of why Syrians might sign contracts to fight in a war in which they will surely die.

The first significant claims of Russian recruitment came from Deir Ezzor 24, an opposition outlet notorious for publishing misleading stories to boost readership and gain attention. The outlet first reported that Russians were “opening the doors to recruitment” in Deir ez-Zor at the beginning of March. The outlet followed up with another “exclusive” on March 14, including an alleged excerpt from the registration form Syrians have signed that reads: “I declare my will to volunteer as a kind response to the support Russia has provided, to support the steadfastness of my beloved country, Syria, and I call on all Syrians to volunteer, to prove to everyone that the Syrian does not forget those who stood by him.”

This, however, is actually the script of a petition that Syrians from Russian-backed units have been signing as a show of support for the Russian military, not an actual contract for deployment. A similar statement was signed by a small Syrian National Defense Forces (NDF) unit in the northern Hama town of Souran on March 11. The NDF is a nation-wide system of local armed groups created to defend their towns, not to conduct offensive operations within Syria, let alone against the Ukrainian army. This 45-man unit made international headlines when a video of them holding a pro-Russia rally was aired on Russian state television on the same day that Russian President Vladimir Putin voiced support for sending Middle Eastern volunteers to Ukraine.

Since then, pro-Ukraine outlets have increasingly published Syrian opposition claims regarding these supposed deployments. On March 13, the Ukrainian government claimed Russia had opened 14 new recruitment centers across Syria, specifying that NDF and 5th Corps fighters have already signed contracts and will be paid $300-600 for the deployment. In reality, these 14 recruitment centers have existed for many years now and are used to recruit Syrians into Russian-backed units within Syria and for deployment in Libya. The existence of these centers and the fact that Syrians continue to sign contracts at them is not evidence that Russia is preparing to send Syrians to Ukraine.

Despite the misleading claims about Syrian recruitment, many Syrians do indeed stand willing to fight in Ukraine. Syrian media portrays Russia as handily defeating Ukrainian forces. Many potential “volunteers” thus see these contracts as a viable and much-needed source of income at a time when the only jobs within Syria are in the army or militias — and even those do not pay a living wage. Moreover, there is also a strong sense of loyalty to Russia among select units, pushing their leadership and rank and file to want to deploy. This phenomenon is prominent among a few north Hama NDF units — such as the aforementioned Souran NDF — but most particularly within the Christian NDF units from Mahradah and Suqaylabiyah.

These two Christian militias have enjoyed extraordinary levels of Russian support over the years due to their shared religion and (before the more recent offensives) their militarily strategic location in north Hama. Russian officers regularly visit the two towns and the militia’s commanders have made trips to the Russian base in Hemeimeem and more recently to Russia itself for a meeting with church leaders. In early 2019 the Russians even partially reorganized the two militias, placing them under direct Russian military command through a new formation called the “Russian Saheliyah [Plains] Forces.”

The most intense pro-deployment rhetoric has come from the commanders of these two militias. But they are still nominally under the command of the NDF’s central office, and the NDF maintains a strict and long-standing policy against foreign deployment. For these two Christian militias to deploy fighters to Ukraine would require a clean break with the NDF — an action that, while not impossible, would certainly mean a major structural change to the NDF.

This touches on the biggest issue for a potential Syrian deployment as it is currently being discussed. The 5th Corps, Tiger Forces (now called the 25th Division), and the Hama NDF units, all directly commanded, partially funded, and trained by the Russians, have served as the key frontline and auxiliary forces for Russian operations in the northwest and parts of the northeast. They will be essential to any future offensive against rebel-controlled Idlib or to pressuring the U.S.-backed Syrian Democratic Forces (SDF) in the northeast. In other words, these units are crucial for both Russian military and soft-power operations in Syria. Deploying substantial numbers of these fighters to Ukraine — who will stand no chance against the modern Ukrainian army — would weaken Russian proxies in Syria while also fueling anti-Russian sentiment as people realize the deployed men were sent to the slaughter.

Such sentiment is already on the rise as Syrians are increasingly angry over Russia’s inaction against Israeli airstrikes and perceived unwillingness to fully conquer the opposition-held Idlib territory. As one NDF officer described the changing situation, “People are starting to realize bit by bit that Syria and Russia are not one and that Russia just follows Russian interests.” Underscoring this are recent statements from the infamous Aleppo MP Fares Shehabi, a powerful businessman once very supportive of Russia, who tweeted on March 11, “This is not our war and no Syrian should fight in it. … Russia is our ally but she is not in danger and the battleground is not on Russian soil..! The Syrian army is a professional & constitutional army and is not a mercenary army for hire like Syrian oppositions gangs are. Russia knows that.”

A 5th Corps officer currently working with the Russians in Hama is adamant that he “will not fight anywhere outside my country.” But when asked if he would warn his friends in the army about the reality of the war in Ukraine, he replied, “If I say these things [that you told me], I will be accused of crimes of treason and incitement to not help friendly forces.” Tricked by pro-Russian propaganda and desperate for money, it does appear that some Syrians have registered for “Ukraine deployments.” Alleged contracts have been shared on popular Facebook groups used for recruiting Syrians to various regime units since March 10. There is no guarantee that a “Ukraine contract” actually leads to deployment in Ukraine, however. Once a Syrian signs a Russian contract and boards a plane, he can be sent anywhere. Russia continues to use the private military contractors of the Wagner Group to expand its mercenary operations across Africa, and it is very possible that they will send Syrians to these countries instead, where their lack of qualifications will be less of a liability.

Absent from all discussions of loyalist Syrian deployment to Ukraine is the central role ex-warlord Mohammed Jaber will certainly play. The Jaber family, wealthy and influential Alawites with connection to the Assads through marriage, formed the infamous Desert Hawks militia in 2013 to support regime military operations. Mohammad Jaber — a retired Syrian Arab Army general — and his two brothers, with whom he co-founded the militia, drew primarily on ex-Special Forces soldiers and other Alawite fighters from Syria’s coast who had proved their combat-readiness. Many of these recruits had previously taken combat and language courses in Russia prior to the war before receiving further Russian training in Tartous after the formation of the Desert Hawks. Aside from training them, Russian officers also embedded as advisors alongside the militia during the 2016 Aleppo offensive.

The Desert Hawks were an effective fighting force with experience in major offensives in the forested mountains of Latakia, the desert around Palmyra, and the urban battles of Aleppo city. But Assad ordered the force disbanded in late 2017 due to the growing power it brought the Jaber brothers. Mohammed Jaber made his way to Russia, and eventually to occupied Crimea, where he resides today.

Despite his exile, Mohammed Jaber retains extensive support within the Jaber clan in Latakia and among his former fighters. “These are men who will die for him,” says the NDF officer who knows former members of the Desert Hawks. If Syrian participation in Ukraine is given the green light, Jaber will likely see it as an opportunity to repair his and his family’s standing with the Syrian regime and certainly order his former fighters to deploy. These veterans would bring actual combat experience and a level of competence that cannot be found among the 20-some-year-old members of the NDF and 5th Corps.

A potential Syrian deployment to Ukraine does appear more likely now than it did two weeks ago. But it is important to be wary of the deluge of Syrian opposition — and now Ukrainian — rumors surrounding the topic. If Syrians are sent it will be a relatively small number of individuals, not entire military units; they will have little to no impact on the battlefield and they will have been lured to their death by lies and the mirage of financial stability. Analysis of this subject would be better focused on its potential impact within Syria. The more fighters from its core proxies that Russia sends, the more it risks weakening its own position within Syria. Meanwhile, the prospect of the war criminal Mohammed Jaber and the former Desert Hawks returning to prominence within Syrian military and political circles is an interesting one, with unclear effects on the local dynamics of the core Alawite communities on Syria’s coast.

Gregory Waters is a Non-Resident Scholar at the Middle East Institute and a research analyst at the Counter Extremism Project. His research focuses on the Syrian regime's security forces, primarily utilizing open source research to assess the capabilities and structure of the Syrian Arab Army and allied militias. You can follow him on Twitter @GregoryPWaters. The views expressed in this piece are his own.