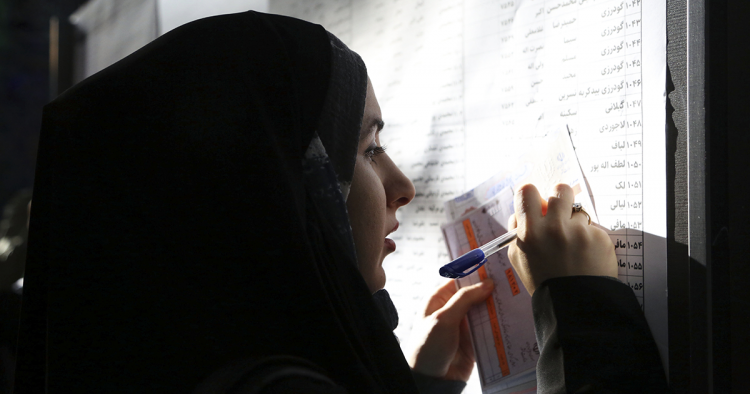 The Islamic Republic of Iran recently announced that, 41 years after its establishment, it is now welcoming the possibility of women’s leadership at the highest levels of government. The declaration was more of a clarification of existing provisions, rather than the issuance of new guidelines. Abbas Ali Kadkhodaei, a spokesman for the Guardian Council, a body charged with interpreting Iran’s constitution and overseeing its elections, stated, “There is not legal ban on the presidency of women.” Officials have attempted to explain that the long-standing exclusion of women from the process was based on a misinterpretation of a borrowed Arabic word, rejal, which had been interpreted as “men.” But in anticipation of next year’s elections, the word now is interpreted as “men and women.”

Optimists are celebrating this development. They believe that this move could reinvigorate weak voter turnout and lead to much-needed reforms in the country. But a more realistic analysis finds that this is little more than a cynical ploy, a public relations maneuver to engage a disenchanted population at home and to posture before the international community in the shadow of the #MeToo movement. There is an overwhelming body of evidence that suggests not much has happened to truly advance women’s rights in the Islamic Republic in years.

Moreover, a basic review of the status of women in Iran reveals gendered laws and society that will not be easily resolved, even with a woman in the top leadership of the country.

Discrimination and inequality before the law

Women in Iran suffer under a system of discrimination and inequality. This fact is manifest in the constitution and penal code of the Islamic Republic. Based on this system, the life of a woman literally is regarded as half as valuable as that of a man. In tort cases, she is entitled to 50 percent of what her male counterpart would be awarded. Regardless of her accomplishments and intelligence, her testimony in court is legally viewed with less credibility as she is only “worth” half of a man.

In domestic cases, the court considers men as heads of the household with legal authority over their wives. A woman is required to satisfy all of a man’s sexual needs and her refusal to do so could result in the loss of her “maintenance” payments, including shelter, food, and clothes. Divorce is easily granted to a husband with a simple request but women must fight strenuous legal battles before they can be released from a marriage. Child custody is immediately granted to the man. Brothers are entitled to twice as much inheritance as sisters, male widowers twice as much as female widows.

Human Rights Watch has found that workplace discrimination is rampant at all levels. Managers can specify the gender preference for candidates in job announcements for technical and management positions. Women are unlikely to obtain jobs that require travel because they need to obtain permission from a male family member before traveling for work or pleasure.

With inequity formalized in the law, the second-class treatment of women also is maintained through society. Women are banned from entry in certain fields of study. They are excluded from many public places, even barred from singing and dancing. Athletic stadiums were closed off to women until the self-immolation of a female fan in 2019 sparked global outrage, leading to the token gesture of separate and unequal access to some sporting events.

The combined effect of these legal inequities and societal practices is that half of the Iranian population lives with a degree of systemic vulnerability that would astonish Western observers. Simply put, women and girls in Iran are vulnerable to violence and harassment, and this permeates every aspect of their lives.

Girls and women who are suspected of dishonoring their family can be physically punished or killed by a male family member, often in their own homes. There are many examples of such depravity. Earlier this year, 14-year-old Romina Ashrafi was beheaded by her father because he believed that she had a boyfriend. Last week, a woman in Mashad was burned to death in her house by her husband. And yet the social stigma and legal consequences for men who have committed femicide are relatively insignificant, lacking any meaningful deterrent effect. As a result, misogynist violence has been normalized in the Islamic Republic.

Survivors of sexual assault often are forced to internalize the experience. They fear social exclusion, backlash from the perpetrator, and the prospect of worsening their circumstances. For example, following the catastrophic rape of over 40 girls and women in Zahedan, grieved and enraged survivors and family members called for a proper investigation of the crimes to deliver justice. But rather than agreeing, Mohammad Jafar Montazeri, the nation’s attorney general, not only denied the alleged crimes, but criticized the local Friday imam who was seeking justice on behalf of his community, stating that, "Anyone who made such a statement ... could be prosecuted under the law as a charge of disturbing the public mind."

Last week a disturbing video from Iran went viral. It depicts a woman drenched in blood, who since has been nicknamed the “Abadan Girl,” being beaten while pinned to the ground. According to several reporters and activists who spoke to the woman in the video, the victim allegedly had been enduring emotionally distressing and non-consensual relations with a superior at her workplace. The Abadan Girl reportedly had planned to reconcile with the family of her harasser to put an end to the problem. But the situation turned violent, and, as seen in the video, she was brutally assaulted and molested by a uniformed guard who was supposedly there to end the conflict.

In a series of “confessional” style videos attributed to the Abadan Girl that emerged in the wake of the viral video, she apparently asks the media to stop sensationalizing her story and says that she will seek justice on her own. Her father also can be seen in another video stating that his daughter suffered from mental health problems — evidently, putting into question the credibility and legitimacy of her claims. Iranian officials have since stated that they have taken the uniformed guard into custody and taken disciplinary action against him, but such claims cannot be verified. Evidently, her grievance has been quashed before it could even be evaluated by the authorities.

Six years since the execution of Reyhaneh Jabbari, a woman who captured the world’s attention for defending her dignity while paying the price of her life, almost nothing has changed to improve the safety of women who have experienced the horror of sexual assault. The education system offers no hope because it continues to devalue the lives of women. Without adequate laws or social change to protect women from such injustice, a female president will not increase the safety and security of Iranian girls and women.

Trading the turban for a hijab?

In the unlikely event that a woman is elected to the top leadership of the country, Iran will transition from a proverbial turban to a headscarf. One can be certain that a female candidate who doesn't believe in wearing the hijab will never be allowed to appear on the ballot, nor will she be able to freely advocate for a hijab-free society as part of her political platform. Those who have done so repeatedly have been arrested, punished with lashes, and publicly humiliated.

While some might choose to wear a hijab as a religious practice, this symbolic piece of cloth is a reminder to all women that they are deprived of the authority and self-determination to make the most basic life decisions for themselves. All choices — from clothing to employment to reproductive decisions, and even simple pleasures like riding a bicycle — are restricted and regulated by a male-dominated authorities.

Although the prospect of a female president in Iran might sound exciting, the recent announcement is little more than an empty gesture rather than a sign of real change. In a country where half the population lives in a system of gender apartheid, this is not a symbol of reform. While an Iranian female president could hypothetically lead her country and represent her citizens on the global stage, she would still face daily discrimination, social repression, and physical insecurity.

Marjan Keypour Greenblatt is the Founder and Director of the Alliance for Rights of all Minorities (ARAM), a network of activists which promotes human rights in Iran. Follow Marjan on Twitter at @MarjanKG. The opinions expressed in this piece are her own.