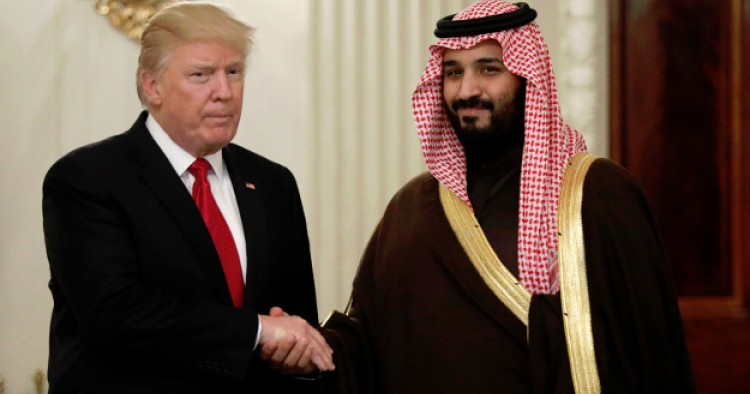 Iran’s Tabnak News Agency has warned that President Donald Trump’s planned trip to Riyadh and his meeting with Saudi and other Arab leaders will set the stage for an Arab-U.S. alliance to counter Iran’s influence in the region. “The invitation to seventeen Arab countries to visit Saudi Arabia and meet with the American president should be seen as an effort to foster convergence between Arab countries and America and to bring them together to establish an ‘Arab-American NATO’ to confront Iran in the Middle East,” cautioned Tabnak, an outlet which is affiliated with former Islamic Revolution Guards Corps commander Mohsen Rezaei. According to article, Jordan, Iraq, Algeria, Nigeria, Bahrain, the United Arab Emirates, Morocco and Tunisia are among Arab countries invited. The article further notes that frequent meetings between senior American and Saudi officials during the first 100 days of the Trump presidency indicate that the two sides have “reconciled their differences that had emerged under the Obama presidency” and have reached an understanding to work together on Syria, Yemen and Iran. “The Iranophobic project began a couple of months ago and its aim is that some Arab countries such as Saudi Arabia and the [United Arab] Emirates can become close allies of the Zionist regime,” it added. “It appears that the Arab NATO project – which has been under discussion for some time – is entering its implementation stage with American President Trump’s trip to Saudi Arabia and the invitation to 17 Arab countries to Riyadh.”

Comment: Since President Trump took office in January, there has been a growing concern in Tehran that the new U.S. administration is contemplating forming a military alliance with Arab allies to push back against Iran’s influence in the Middle East. In February, Grand Ayatollah Nasser Makarem Shirazi, a top Iranian cleric close to Supreme Leader Ali Khamenei, warned that the Trump administration intended to create an “Arab NATO” and called on Muslims to “stay vigilant to U.S. plots.” Another article in Tabnak in the same month, suggested that the news indicated the new U.S. administration planned to pursue a “two-pillar policy” to pressure Iran. On the one hand, the article said, the Trump White House will increase political, economic and diplomatic pressure on Iran, mainly by imposing new sanctions and adding additional restrictions to the implementation of the nuclear agreement Tehran signed with world powers in 2015. On the other hand, according to Tabnak, Washington will “upgrade its cooperation with America’s regional allies in order to form an alliance against Iran in the region.”

Tabnak’s commentary referred to a February 15 news story in the Wall Street Journal, which said the Trump administration was “in talks with Arab allies about having them form a military alliance that would share intelligence with Israel to help counter their mutual foe, Iran.” The report added that the alliance would include four Arab nations of Saudi Arabia, the United Arab Emirates, Egypt and Jordan.

The growing anxiety in Tehran about the Trump administration’s Iran policy stands in stark contrast to initial optimism expressed by Iranian leaders and state-run media before Trump took office. During the U.S. election campaign, many Iranian leaders expressed the hope that then-candidate Trump’s favorable view of Russian President Vladimir Putin and the Trump team’s eagerness to work with Moscow in the war on terrorism might benefit Iran’s agenda in Syria and in the broader region. But that optimism has faded quickly over the past weeks as the Trump administration adopted an aggressive approach vis-à-vis Iran, by including the Islamic Republic in the travel ban, imposing new sanctions on Iranian entities, and warning Tehran over its controversial ballistic missile test.

Trump’s scheduled visit to Saudi Arabia also comes at a time when relations between Iran and Saudi Arabia have reached their nadir. On May 2, Saudi Arabia’s Deputy Crown Prince Mohammed bin Salman ruled out the prospect of dialogue with Iran to defuse tension in the region. “How do you have a dialogue with a regime built on an extremist ideology ... that they must control the land of Muslims and spread their Twelver Jaafari sect in the Muslim world,” he said in the interview broadcast on Saudi state television. “We are a primary target for the Iranian regime,” Mohammed continued, warning that “we won’t wait for the battle to be in Saudi Arabia. Instead, we’ll work so that the battle is for them in Iran.” Mohammad’s remarks prompted angry reactions and threats from Tehran.

Iran’s Defense Minister Brigadier General Hossein Dehghan warned on Sunday that his country would hit back and destroy all of Saudi Arabia, except the Muslim holy sites, if Riyadh showed any aggression toward the Islamic Republic. “I advise them against committing any ignorant move. But if they commit such a mistake, it is unlikely that anywhere in Saudi Arabia would remain intact with the exception of Mecca and Medina,” he said in an exclusive interview with the Lebanese Al-Manar TV channel.