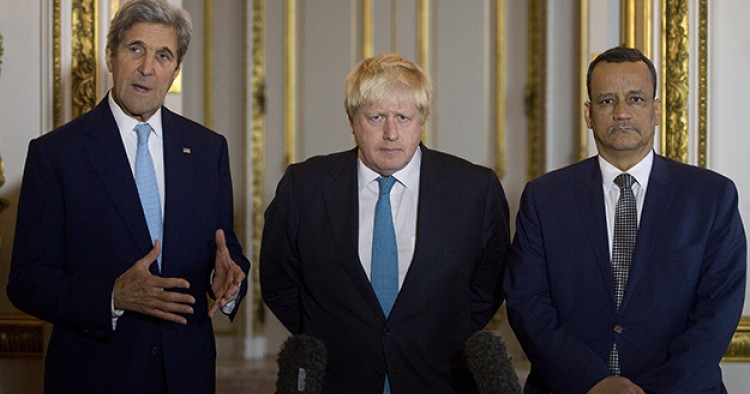 The State Department has welcomed an agreement among all Yemeni parties and the Saudi-led coalition to observe a 72-hour cease-fire beginning on October 19. The warring factions agreed to “implement a full and comprehensive halt to military activities of any kind and help facilitate the delivery of humanitarian assistance to Yemenis across the country.”[i]

While an end to the fighting in Yemen, which has been the source of a tragic and totally unnecessary loss of thousands of lives over the past 18 months, would certainly be a welcome development, there is reason to doubt the durability of a cease-fire agreement at this time. This latest announcement is, of course, only one of a series of efforts to forge an end to the fighting, which stretch back to the early months of the Saudi-led intervention and the proposals for a Ramadan pause. All of the previous efforts failed for many of the same reasons that this latest initiative is also likely to fail. First and foremost, while the announcement spoke hopefully of enabling U.N. Special Envoy Ould Cheikh Ahmed to continue his consultations and renew peace negotiations as soon as possible, it’s clear that the prospects for a resumption of serious talks to end the political crisis in Sanaa are nothing more than that: a hope. Since the talks broke off in Kuwait earlier this year, there is little reason to believe that the parties are, in fact, ready to return to the negotiating table with a serious goal of ending the conflict any time soon. Indeed, as my colleague Charles Schmitz aptly observed, both sides appear more deeply resistant than ever to the compromises or commitments that are requisite to a sustainable resolution.

In particular, there is reason to doubt that Ali Abdullah Saleh is prepared to cooperate with a long-lasting settlement. Saleh has demonstrated consistently since he surrendered his authority in 2012 that he is willing to go to any lengths to regain the presidential palace, either directly or through his son, Ahmed Ali. An end to the fighting is not a priority for him. Saleh has strengthened his position in recent months, and has once again demonstrated that he is a master maneuverer, but he is not yet able to consolidate his position. His concern that the Houthis were prepared to negotiate an agreement without him is a reflection of the limitations of his power and may have been one of the key elements that led to the failure of the Kuwait round of talks.

A second wild card remains Iran. While most of the international attention on outside involvement in the Yemen conflict has focused on Saudi Arabia and the coalition—to the extent that there have been some popular demands that Saudi Arabia “return to the talks” to which it is not now and never has been a party—Iranian support for the Houthis and their partners remains a key pillar of the resistance to the Hadi government and its allies. Pummeled by critical coverage of their inept military performance in Yemen, the Saudis quickly acquiesced to the calls for a cease-fire. But there is no indication that the international community has applied equal pressure on the Iranians to cease their support for their Houthi clients and Saleh, despite reports [ii] of a surge in Iranian arms smuggling to the Houthis. In the meantime, Iran continues to reap cheap benefit from its engagement in Yemen, destabilizing the Arabian Peninsula, threatening Saudi security, and apparently driving a new wedge in Saudi Arabia’s relations with the United States and other key Western partners. The missile attack on the USS Mason last week, threatening freedom of navigation in the Red Sea and the Bab al-Mandab, is of greater potential benefit to the Iranians than it is to their Yemeni partners. It would appear that the question of possible Iranian involvement in the decision to attack the Mason would be one worthy of serious examination.

Finally, there is the question of command and control. Even if the senior leadership of the various factions in the dispute support the cease-fire, experience suggests that they are unlikely to exercise sufficient control over their partners or their own forces to end the fighting. Roadblocks and checkpoints manned by the various factions pose the principal threat to the delivery of humanitarian assistance to many parts of the country, not air strikes. But previous attempts to get supplies to the neediest populations in Taiz and elsewhere failed to surmount those obstacles. Even in those fleeting instances, like the effort this spring, when there appeared to be a genuine willingness on the part of the parties to cease hostilities in conjunction with a negotiated solution, the inability of the parties to control their armed elements sapped confidence in the process and eventually drove the parties away from the negotiating table and back to the conflict.

Despite the well-meaning efforts of the international community to stop the military conflict, coupled with Cheikh Ahmed’s heroic determination to bring the parties back to the table, the central reality of the Yemen civil war remains: the fighting won’t stop until all of the parties conclude that they have nothing more to gain from its continuation. Regrettably, it’s difficult to see that we’ve reached that point.

[i] United States of America, Department of State, Secretary of State, Announcement of the Cessation of Hostilities in Yemen, by John Kerry, October 18, 2016, http://m.state.gov/md263252.htm.

A fight for survival in a new landscape: Can Yemen’s GPC recover after Saleh?