Yemen on a Road to Nowhere 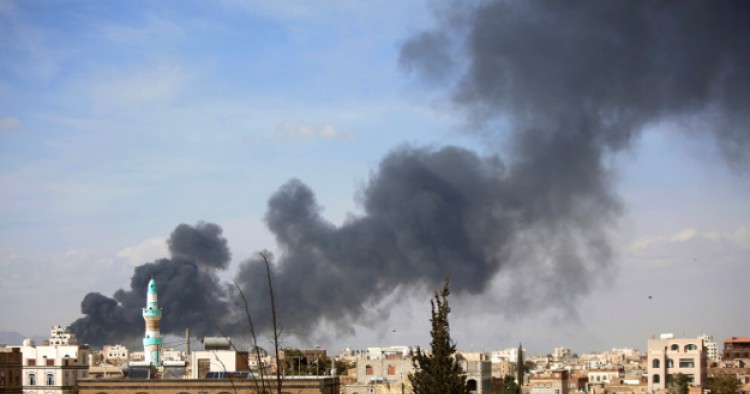 U.N. mediator to Yemen, Walid Sheikh, recently succeeded in negotiating the release of a number of political prisoners held by Houthi rebels, including a government minister, as a confidence-building measure. Despite this small success, the third round of negotiations in the Yemeni conflict appear to be floundering without a start date.

Originally scheduled for January 14 and now delayed indefinitely, the negotiations seem to have little purpose other than satisfying the demands of the international community for a mediated solution. Neither side in the conflict exhibit any real desire to even recognize their opponents. Former Yemeni President Ali Abdullah Saleh last month demanded direct negotiations with the Saudis, completely ignoring Abdu Rabbu Mansour Hadi’s claims to represent the legitimate Yemeni government.[1] Hadi’s military chief of staff similarly declared that the war is between Arabs and Persians, parroting Saudi arguments that Iran is driving the conflict in Yemen.[2]

Meanwhile, the Saudi-led coalition senses that it is making progress on the ground and does not want a negotiated settlement until the military option is exhausted. Mohammed al-Maqdashi, Hadi’s top military commander, declared that the war will be over in six months and that Hadi’s forces will control all of Yemen’s governorates.[3]

Saudi-backed Yemeni forces have indeed made some gains of late, but are far from total victory. In the eastern desert, Jawf and Marib governorates are largely under the control of forces loyal to Hadi, and Sana’a is merely 25 miles from the frontlines. Hadi’s forces also launched a new front in the northwestern town of Hajja, taking the border town of Meidi and threatening Houthi/Saleh control of the Red Sea.

However, the populous western highlands remain in the hands of the Houthi/Saleh forces, including the southern regions of Taiz and Ibb, throwing into doubt the common assumption that the Houthi and Saleh cannot hold Sunni-dominant territory. Saleh appears to have deep roots in the region, and even parts of the southern governorates of Dhalea, Lahj, and Shabwa are threatened by the Houthi and Saleh.

The Saudi-imposed blockade of Yemen seems to not have prevented Saleh and the Houthi from acquiring precious fuel and military supplies for the war effort. Smugglers and locals looking to make a profit facilitate the transport of supplies even through the lines of battle. Reports of smuggling along the coast of eastern Yemen, supposedly in the hands of those opposed to the Houthi, are common. Only recently has there been any attempt by the Saudi coalition to control the eastern coast.[4]

Worse, Hadi’s forces cannot control the territory it has gained. Assassinations and attacks on infrastructure even plague Hadi’s seat of government in Aden. Hadi’s appointed governor, Jaafar Saad, was assassinated by the Islamic State, also known as ISIS, in December. Shalal Ali Shai’a, head of security in Aden, narrowly survived assassination when a massive car bomb destroyed his home in Crater, Aden, this month. Aidrous al-Zabidi, Saad’s replacement, and Nasser al-Khabji, governor of Lahj, survived a car bomb attack while on the road in Lahj. Judges, security officers, and military leaders have also been assassinated in Aden and the city’s famous refinery has been crippled by attacks.

To build political support in the south, Hadi began appointing members of the southern resistance to high positions within his government, many of whom had opposed his administration[5]. In October of last year, Jaafar Saad, a popular military leader who lived in exile in London since the war of 1994, was appointed governor of Aden. Saad was an Adeni who fought on the side of Ali Salem al-Beidh against the forces led by Hadi in 1994. After Saad was assassinated in December, Zabidi took his place as Aden’s governor with Shai’a appointed as his head of security. Zabidi and Shai’a are also members of the southern resistance from the Radfan and Dhalea region that sided with Beidh against Saleh. Shai’a is renowned for his military resistance to Saleh’s regime, which Hadi had supported at the time, long after the fall of Aden in 1994. Only in 2001 did Saleh commute a death sentence against Shai’a as part of a general amnesty of southerners.

However, Hadi’s political support in Yemen remains tenuous. Hadi’s main pillars of support are the archenemies of the Houthi—the Muslim Brotherhood-linked Islah Party, Salafis, and the southerners. Hadi also draws support from those civil society leaders who believed in the promise of the rule of law and the implementation of the outcomes of the National Dialogue Conference.

However, all these groups harbor serious mutual animosities. The southerners do not trust the northern leadership of the Islah Party in particular because of Islah’s role in the war of 1994 and its aftermath in the south. Maqdashi, leader of the Yemeni military in the eastern desert and close associate of Ali Mohsin al-Ahmar, has threatened southerners who aspire to have their own state.[6] Most southerners see Maqdashi and Ahmar as criminals from the Saleh regime, as do many of the liberal civil society leaders of the Arab Spring. Furthermore, the leadership of the United Arab Emirates, a major sponsor of Hadi’s government, is suspicious of the Islah Party for its ties to the Muslim Brotherhood.[7] Even among the southerners Hadi is courting, his support is only tepid due to the government’s lack of resources and ineffectiveness. Khabji threatened to resign because of the government’s inability to protect him as governor of Lahj.

To make matters worse, al-Qaeda in the Arabian Peninsula (AQAP) retains its dominance of Mukulla, the major port of eastern Yemen. AQAP’s rivalry with the Islamic State has threatened to spill violence into the eastern coast, which has thus far been largely spared from the war. Furthermore, AQAP made appearances in Zinjibar and al-Houta, the capitals of Abyan and Lahj governorates. These governorates border Aden, threatening Hadi’s control.

While the Houthi and Saleh stubbornly retain control of the populous western highlands of Yemen, their harsh rule is not winning them many admirers. With no oil exports, the effective government in Sana’a lost its main source of revenue. The Houthi government has imposed new taxes, royalties, and fees on businesses, which are widely resented, and is urging citizens to donate to the war effort. The economy is in a tailspin with the Houthi having spent at least half of Yemen’s foreign reserves, and many larger private sector businesses deserting the war-ravaged country.

Furthermore, when the Houthi overran the capital in September 2014, the movement rode a wave of popular support for more effective implementation of the National Dialogue Conference. By January 2015, when Hadi announced the official conclusion of the National Dialogue Conference, the public had largely lost interest in the elite deliberations in the Movenpick Hotel. At the time, the Houthi takeover was accompanied by widespread expectations of perhaps a more effective government. The Houthi were quick to disappoint, revealing their true intentions of simply replacing the Sana’a government with their own.

Houthi militias have rounded up large numbers of Islah Party leaders and activists, as well as journalists, to use as hostages in negotiations. Houthi leaders have shown clearly that they have greater interest in their own empowerment rather than changing Yemen’s style of governance. Ali al-Bukhaiti, former member of the Houthi central political committee, charged that in one year the Houthi movement had corrupted more than what Saleh corrupted in his 33-year reign.[8]

With the United States moving toward more overt support of the Saudi-backed war in Yemen[9]—and having already agreed to resupply the Saudis with a billion dollar arms deal—the conflict is set to persist on a long, destructive road with little political resolve to end the Yemeni misery.

[1] al-Watan. “Saleh calls for direct dialogue with Saudi Arabia… and warns the Kingdom: the war has yet to begin.” (Arabic)http://www.elwatannews.com/news/details/884365

[4] Aden al-Ghad. “Popular Committee of the Resistance in Aden dissolves and pledges support for Hadi and the Governor of Aden,” 30 Dec 2015. (Arabic) http://adengd.net/news/186929

[5] Aden al-Ghad. “Popular Committee of the Resistance in Aden dissolves and pledges support for Hadi and the Governor of Aden,” 30 Dec 2015. (Arabic) http://adengd.net/news/186929