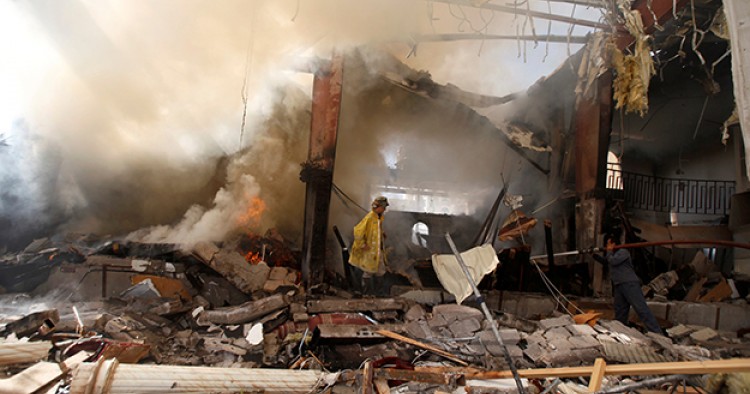 The parties to the intractable Yemen war appear further entrenched in their enmity than ever before, despite U.S. and British efforts to push Yemeni leaders toward new negotiations. The latest diplomatic push came after a deadly Saudi airstrike on October 8 at the funeral of the father of Yemen’s interior minister killed more than 140 civilians and wounded more than 500, many from the Khawlan tribe located in the strategic area east of Sanaa. Much of Yemen’s political elite attended the funeral, and among the dead are Sanaa’s mayor, many members of the Rowishan family, and even people close to Saudi-backed leader Abd Rabbu Mansour al-Hadi. Ali Mohsin, leader of the Saudi-backed forces in the eastern desert, sent a note of condolence to Hadi, and Hadi’s foreign minister, Abdel-Malek al-Mekhlafi, condemned the strike. The White House’s National Security Council spokesperson, Ned Price, while urging Yemen’s leaders to return to negotiations, said the United States would review its military cooperation with Saudi Arabia. “U.S. security cooperation with Saudi Arabia is not a blank check,” he wrote.

Even before the strike, press leaks indicated a new cease-fire may take hold in Yemen soon, and even open a new round of negotiations, but Yemen appears closer to a permanent division than a political settlement. After the talks in Kuwait collapsed in August, each side moved to consolidate its position. The Houthi-Saleh alliance attempted to shore up its thin veneer of legitimacy by appointing a new prime minister to form a government in Sanaa, and the Saudi-backed Hadi government attempted to bolster its claim to govern by moving the Central Bank to Aden. These moves are futile; neither side has much legitimacy nor ability to govern. Instead, the country is rapidly sliding further down the path of permanent dysfunction along the lines of its Somali neighbor.

Toward the end of the failed Kuwait talks in late July, the Houthi-Saleh coalition announced the formation of the Supreme Political Committee to replace the Houthis’ Supreme Revolutionary Committee, created after the collapse of Hadi’s interim government in early 2015. The new Supreme Political Committee formalizes the Houthi-Saleh alliance by dividing its ten seats equally between Ali Abdallah Saleh’s ruling party and the Houthis, and establishing a rotating presidency. Saleh reportedly insisted on Houthi senior leader Saleh al-Sammad replacing Mohammed al-Houthi in the country’s top position, indicating the growing influence of Saleh in formal government. In a further effort to bolster legitimacy, the Saleh-dominated parliament, dormant for years, convened and voted to approve the new political institution. These efforts went nowhere internationally; the U.N. Security Council promptly condemned the new Supreme Political Committee and reiterated its recognition of the Saudi-backed Hadi government.

Saleh’s increasing role in Sanaa’s government represents a shift. In March 2015, at the beginning of the war, the former president positioned himself as the ultimate gatekeeper of Yemeni politics, arguing that only he could put Yemen back together again. He called upon the Saudis to negotiate only days after the first bombs fell on Sanaa. Nobody paid attention because everyone knew that Saleh’s solution would include restoring Saleh to Yemen’s leadership, and because it appeared the Houthis were in charge in Sanaa, not Saleh.

However, with the creation of the Supreme Political Committee, and now the appointment of a new prime minister, Saleh is gambling on one side of the conflict instead of playing dealmaker among all. Following Hadi’s orders to move the Central Bank of Yemen to Aden, Sammad announced the appointment of Abdelaziz bin Habtour to form a new government in Sanaa. Bin Habtour is a southern academic, and a member of Saleh’s ruling party. He is a southern secularist, far from any of the political currents of the northern Zaydi Shiite Houthis. His appointment diminishes the profile of the Houthis in Sanaa’s politics and is a clear indication of Saleh’s growing role in directing affairs in Sanaa.

For Saleh, the appointment of bin Habtour is particularly savory. Bin Habtour denounced the Houthi coup in 2014, was appointed governor of Aden by Hadi in December 2014, and greeted Hadi in Aden when he fled house arrest by the Houthis in Sanaa in January 2015. Now he is back in Sanaa and leading Saleh’s new government. Bin Habtour’s appointment is ironic not only because he was formerly close to Hadi, but also because Hadi’s prime minister, Ahmed Obeid Bin Dagher, followed the opposite path. Bin Dagher was a key supporter of Saleh in the General People’s Congress even after the Houthi coup. Bin Dagher only left Saleh after the Saudi bombing campaign began in March 2015. Hadi stole Saleh’s key man, and Saleh has now returned the favor.

While Saleh and the Houthis are trying to gain legitimacy for their government, Bin Dagher and the Hadi government are busy trying to demonstrate that they can govern, as shown by his decision to move the Central Bank to Aden. But the Hadi government faces constant criticism that after a year of controlling Aden, the city still has no electricity or security, much less economic viability. Hadi himself resides in Riyadh, not Aden, out of concerns for his safety. While the Hadi government may have international recognition, Yemenis, given its performance in the southern territories, do not have much confidence it can actually govern.

While each side tries to consolidate its political position, the military situation is locked in a never-ending standoff. On the first day of the Saudi bombing campaign in March 2015, the Saudi military announced that Yemeni missile bases had been destroyed and were no threat to Saudi territory. Today, a year and half later, the Houthi-Saleh alliance continues to fire missiles regularly into Saudi territory, though without any real military effect. In the face of a crumbling economy and a military standoff, political leaders on both sides of the Yemeni conflict and in Saudi Arabia appear incapable of offering a reasonable path forward. Given their intransience, Yemen is headed toward a chaotic partitioning into multiple unstable zones of equally ineffective governance.