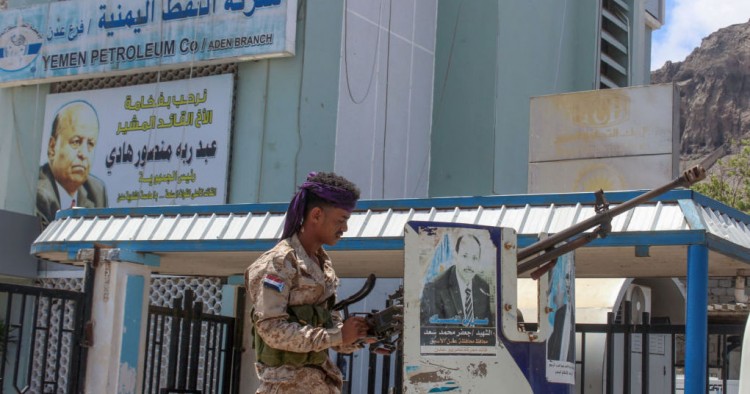 On April 25, the Southern Transitional Council (STC), which represents a sizeable secessionist movement within southern Yemen, declared self-administration and claimed authority over state institutions in the interim capital of Aden. This seemingly climactic move is not, in fact, a full-blown secession announcement and will not radically change the existing dynamics in the South. More broadly though, the declaration demonstrates the region’s volatility, the limited reach of Yemen's government, and the difficulty of imposing a solution to the problem of secessionism. It is also sparking political competition for Saudi patronage, and all of this poses a major diplomatic challenge for the Saudis.

The timing of the STC's announcement was triggered by the catastrophic floods that struck Aden two days earlier. The torrential rainfall left ten people dead and hundreds of families affected during the first days of the holy month of Ramadan. Moreover, with the government of President Abed Rabbo Mansour Hadi based in Riyadh during the crisis, efforts by government officials to travel to Aden in the aftermath of the natural disaster were seen by the STC as political stunt. The government's absence meant Yemen's prime minister, Maeen Abdulmalik Saeed, and members of his cabinet were unable to depart from Riyadh to Aden due to the possibility that the STC might bar their entry at the airport.

This isn’t the first time

To date, this is the third time that the STC has made threats of self-governance aimed at weakening the government and establishing itself as a de facto authority. In early 2018, the STC announced its official formation as a political entity representing southern interests. The STC then presented strict demands and an ultimatum calling for the sacking of the former prime minister, Ahmed bin Daghr, which despite initial resistance from Hadi, was ultimately achieved. The second threat was in August 2019 in the aftermath of the Houthi attack on southern forces affiliated with the STC, which led to a confrontation between the STC and the Hadi government over the latter’s inability to provide security. The STC escalated by taking control of Aden’s ports, refinery, the central bank, and the ministries of Transport and Interior, among other institutions. The standoff between the two sides ultimately resulted in the signing of the Saudi-sponsored Riyadh Agreement in November 2019, which gave the STC desperately needed recognition and power. The deal also gave the STC direct, public access to the Saudi leadership, allowing it to gradually cultivate a relationship with Hadi's backer, increasing his sense of insecurity.

Every time it has escalated, the STC has consolidated more gains than it expected — a tactic that the Iran-backed Houthi militia has used to great effect over the past six years of conflict. The key difference, however, is that STC is cooperating and engaging with the Saudis, as opposed to firing missiles at them. The STC has repeatedly welcomed Saudi Arabia back into Yemen's conflict to gain Riyadh’s approval and hasten the process of secession. The STC also regularly touts its success and commitment in fighting the Iran-backed Houthi forces, hoping to tempt the Saudis to stop backing Hadi and support them instead.

Hadi and the coalition respond

President Hadi is feeling the pressure. He responded to the STC’s declaration by denouncing it as a coup and blaming the group and its the primary backer, the United Arab Emirates (UAE), for hampering the implementation of the Riyadh deal, which is not the best diplomatic move given his volatile position. Hadi has also solicited assistance from governors in the southern region to condemn the STC’s declaration of self-administration. The government, its supporters, and pro-unity activists have questioned the Saudi and Emirati commitment and endgame in Yemen, putting pressure on Riyadh to respond.

The Saudis and the Emiratis both issued statements of support for Hadi's government, emphasizing the importance of returning to the Riyadh Agreement, which requires cooperation between Saudi Arabia, the UAE, Hadi, and the STC against the Iran-backed Houthis. The de-escalatory tone of the Saudi-led coalition was expected as any political or diplomatic rupture would have had severe consequences for operations against the Houthi militias on the ground.

However, coordination is easier said than done. There is a mutual trust deficit between Hadi's government and the STC, making the Riyadh Agreement's implementation painfully slow, if not outright impossible. The difficulties were seen in mid-March when the Saudi ambassador to Yemen, Mohammed bin Saeed al-Jaber, denounced the military escalation instigated by forces affiliated with the Hadi government in Shaqra, in southern Yemen, and urged Hadi's forces to focus on responding on the Houthi threat and commit to the Riyadh Agreement. In a similar vein, the STC has done very little beyond handing over the government institutions it seized in its territory and allowing the return of Hadi and his government to the interim capital. The STC continues to challenge the entry of presidential forces into Aden, however. All this presents the Saudis with a problem, as siding with one party in the Hadi-STC conflict will inevitably affect their overall ground operations in Yemen.

What are the implications?

What transpires in the South has huge implications not only for Hadi’s government, but also for the Islah party, which is currently being squeezed from all sides. Often referred to by its adversaries as the Muslim Brotherhood party, Islah is facing pressure in the North given the Houthis' recent incursions into the Islah strongholds of Nihm, Jawf, and Marib. Given the STC’s longstanding enmity with Islah and its lack of popularity among southerners, who have long viewed the party as responsible for their suffering since the 1994 North-South civil war, Islah finds itself facing an existential crisis. Within this context, the possibility of violent conflict between Islah and the STC is high and poses a real threat to Yemen's stability.

Although the STC is not the only player in the South, it is the single most potent one in terms of its political, military, and organizational capabilities, thanks to the UAE's backing and training of tens of thousands of southerners before its withdrawal from the South. Prior to the STC’s formation, most southern separatist movements, such as the former Hirak movement, died out or became part of the STC due to a lack of clear leadership and regional backing. The STC's strong relationship with the UAE and appreciation for the Saudi role in Yemen arguably make it the most significant threat facing the Hadi presidency at present, as its appeal makes it a more plausible actor for the Saudis to support.

Up until now, Hadi has kept a semblance of power by maintaining an exclusive relationship with Saudi Arabia. The possibility that the STC will share the same political or economic privileges will increase competition between the two and force Hadi to make uncomfortable changes. Given his desire to survive and maintain power, cooperation with the STC under the Saudi-led coalition umbrella rather than competition might best serve his interests. However, it might not sit well with other factions in the country.

Given the longevity of Yemen's war and the Houthis' increasing control over the North, the STC may present a face-saving alternative that the Saudis could begrudgingly endorse. If left with no option but a Houthi state south of its border, the Saudis might conclude that a clearly articulated southern Yemen that is a reliable and robust enemy of the Houthis in the North; has no ideological, religious, or tribal affiliations with them; and maintains control of the critical Bab el-Mandeb Strait is a more appealing entity to endorse and protect.