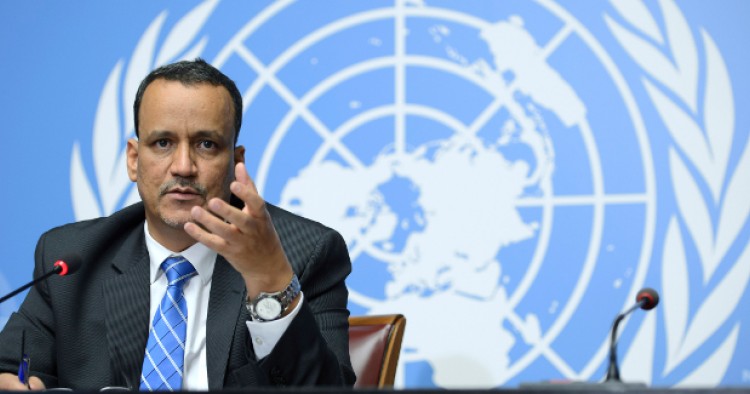 Just days before the first anniversary of the Saudi air campaign in Yemen on March 26, the U.N. special rapporteur to Yemen, Ould Cheikh, announced a cease-fire to begin April 10 followed by a third round of talks between the warring Yemeni factions on April 18. These talks have a better chance of success than previous attempts. The Houthi-Saleh alliance has long insisted that a complete and final cease-fire proceed any talks, and in previous attempts at negotiation, announced cease-fires never took hold and talks went nowhere. This time, direct talks between the Houthi and the Saudis over the last three weeks have led not only to an informal cease-fire along the Yemeni-Saudi border that is holding, but also to a normalization of sorts: joint military teams are removing mines, the border has opened to limited crossing of people and goods, and remarkably, the Saudis earlier this month sent a large shipment of relief supplies to Saada, the home of the Houthis.[i] In what may be part of the deal, a Houthi leader made a statement a week later asking the Iranians to stay out of Yemeni affairs.[ii] While this abrupt turn of events in Saada is certainly welcome, it raises more questions than it answers about Yemen’s future.

The end of the Houthi-Saleh alliance?

The most immediate question the cease-fire raised is that of the role of former President Ali Abdallah Saleh and his alliance with the Houthi. The informal cease-fire is between the Houthi and the Saudis, but only along the border. Fierce fighting is still raging across much of the rest of Yemen, and the Saudi coalition is still participating in airstrikes against Saleh and Houthi forces in Taiz, Amran, Sanaa, and the Jawf. The talks between the Houthi and the Saudis were well cloaked in secrecy, so few details of the conversations have emerged or even whether Saleh had a role in the talks. But it certainly appears that the Houthi have cut a deal on the side.

On Saturday, Saleh seemed to respond to such speculation. His supporters organized large demonstrations in Maidan Sabaeen, the military parade grounds near the presidential palace where Saleh spoke briefly while coalition aircraft patrolled the skies. The event did mark the first time Saleh organized a demonstration separate from his Houthi allies, and observers agreed that Saleh showed his enduring political strength to both his allies, the Houthi, and to his enemies in the Saudi coalition. Significantly, his large demonstration was accompanied by a large contingent of Republican Guard units, the heart of Saleh’s military forces. The Houthi also organized a separate demonstration in the northern part of the city in the evening, clearly revealing some friction between the allies, though key supporters on both sides calmed tensions between the camps.[iii]

Who is winning the war?

Also unknown is the real balance of military forces in Yemen. Hadi supporters and the Saudi coalition argue that Houthi and Saleh forces are close to defeat. Yemeni forces in the eastern desert are slowly approaching Sanaa, and Houthi and Saleh forces have not seen significant advances, only slow retreat, since the Saudi campaign began. But many others, among them Houthi leader Abdel Malik al-Houthi, argue that Saleh and the Houthi forces are well prepared for a long war in their mountainous home turf against an ill-prepared and fractious coalition of Yemeni forces cobbled together under Hadi’s inept leadership, and that the Saudis have taken serious losses along the border.[iv]

The battle in Taiz in the southern portion of Yemen’s western highlands seems to confirm the continued strength of the Houthi-Saleh forces and the infighting in Hadi’s coalition. Just weeks ago, resistance fighters and military units loyal to Hadi had finally broken a long siege, opening a road from the southwest into Taiz and allowing supplies into the city, but forces loyal to Saleh and the Houthi counterattacked last week and re-imposed the siege. Sources said heavily armed reinforcement from Ahmed Ali Abdallah Saleh’s Republican Guards tipped the military balance once again in favor of the Houthi-Saleh forces.[v]

The inability of the forces loyal to Hadi to secure Taiz since taking Aden almost eight months ago may also be a result of feuds in Hadi’s faction. Resistance fighters in Taiz have often complained of a lack of support from the coalition. Indeed, the focus of the Saudi supported ground campaign is Sanaa, not Taiz. The Saudis and Emiratis trained and equipped a large army in the eastern desert led by Islah-affiliated leaders such as Mohammed al-Maqdashi, Hashim al-Ahmar, and most famously Ali Mohsen al-Ahmar. Southerners argue that these leaders are hostile to southern aspirations for independence or any real political power, and they do not want to see southern military success in Taiz. Southerners compared the vast array of tanks deployed in the eastern desert for the assault on Sanaa to the paltry weaponry available to those fighting in Taiz.

The fractious politics of Hadi’s coalition also emerged in a video statement from former southern president, Ali Salem al-Beidh, on the anniversary of the Saudi campaign. Beidh praised the Saudi-led Operation Resolute Storm and Restoration of Hope, arguing that they represented a historic assertion of the power of the Arab nation to define its destiny. Beidh was long identified with the Iranians, who backed him in Beirut before he switched allegiances (again) in 2015 to support the Saudis. The southern leader, thus, seemed obliged to argue in his message that his support for the Saudis was not opportunistic, but a studied decision in the interests of the southern cause. Beidh warned of the growing threat of al-Qaeda and ISIS in the south, a threat that was “cooked” in Sanaa, and of the danger of northern troops in the Yemeni military units in the Hadhramawt. He also argued that the Gulf Cooperation Initiative and the National Dialogue failed because Yemeni unity was a failure. If negotiations for a political settlement are to succeed and if Gulf security concerns are to be allayed, southern aspirations for independence from the north must be recognized, he argued.[vi]

A new focus on al-Qaeda and ISIS?

Beidh’s concern about the threat of al-Qaeda may well be shared by the Saudi coalition. Hadi’s forces cannot secure even their capital city, Aden. A series of coordinated car bombings claimed by ISIS killed a large number of soldiers and civilians at checkpoints outside coalition headquarters in Bureiqa, outside of Aden, on March 25. On the same day, Saudi Apache helicopters attacked the home of alleged al-Qaeda leaders in al-Houta, Lahj, just north of Aden. The informal cease-fire in Saada is coinciding with a new assault by the Saudi-led coalition against al-Qaeda in the south. Airstrikes hit al-Qaeda positions in Aden, Abyan, and Lahj.

The United States also attacked a training camp in Mukalla, killing a large number of what were said to be new young recruits. The United States had previously targeted only leaders, but the attack on Mukulla indicated a new offensive against al-Qaeda’s infrastructure and foot soldiers. In what might indicate the opening of a more general offensive against al-Qaeda, on Saturday, another training camp was attacked in Abyan and on March 28, strikes hit security facilities allegedly occupied by al-Qaeda in Zinjibar, the capital of Abyan. During the Saudi air campaign, al-Qaeda was not attacked, and Saudi leaders claimed that al-Qaeda would be dealt with later when there was a legitimate government in Sanaa. But al-Qaeda’s expansion and the inability of the Hadi government to consolidate control or even political coherence anywhere in the south seems to have led the Saudis to reconsider.

President Hadi May Lose Out

If Beidh’s arguments strain credibility, President Abdu Rabbu Mansour Hadi managed to outdo him by making by far the least credible claim of all: after one year of the coalition operation, Yemen is now more secure.[vii] Out of security concerns, Hadi is a refugee in Riyadh, and on the rare occasions he visits Yemen, he is a prisoner in his heavily guarded palace in Mashaiq, Aden. And, out of security concerns, it appears that the Saudi and Emiratis have concluded that the focus needs to switch from the war against the Houthi and Saleh to the war against ISIS and al-Qaeda. Hadi may be the biggest loser in the talks. The Saudis hold onto him because he represents a thin thread of political legitimacy, but if talks between the Saudis and the other parties in Yemen are the basis of the cease-fire, that thin thread will no longer be needed. At the very least, Hadi will become a short-lived symbolic head of state while people outside of his government determine Yemen’s future.