Another tough year for Turkey-US ties 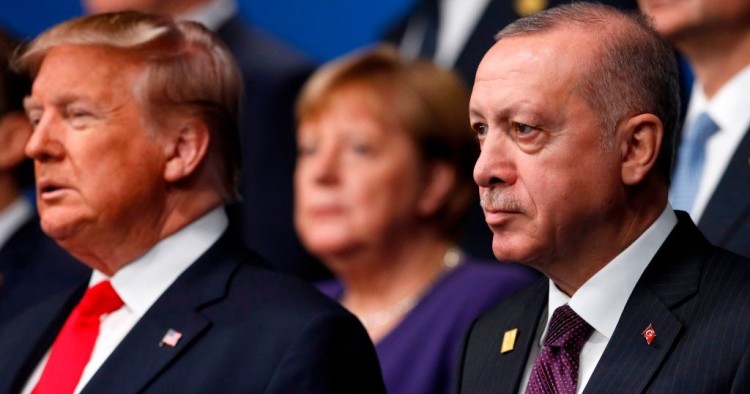 2019 was another tough year for Turkey-U.S. ties. Two developments complicated relations further. Despite months of pressure and the threat of sanctions from the U.S., Turkey received the first shipment of Russian S-400 missile defense equipment in July. In response, the U.S. expelled Turkey from the F-35 stealth fighter jet program. Turkey, one of the largest F-35 export customers, had planned to buy 100 jets. It was also involved in the F-35’s production as one of eight partner countries that joined the program in 2002, manufacturing some 900 parts for the plane.

The delivery of the S-400, a system designed to shoot down NATO airplanes, marked the most significant rupture in Turkey-U.S. ties in decades. It came at a time when Washington’s concerns over Russian influence at home and abroad run high. Many in the U.S. capital think that the sale of the S-400 to a NATO ally is the latest in a long saga of Russian efforts to chip away at the United States’ preponderance of power.

After the delivery of the S-400, Republican and Democratic U.S. lawmakers ramped up pressure on President Donald Trump to impose sanctions on Turkey under a law mandating penalties for doing business with Russia’s military known as CAATSA, passed in 2017. But the Trump administration has stopped short of imposing sanctions on Turkey.

Turkey’s military incursion into northeastern Syria complicated the White House’s bid to put the brakes on congressional efforts to punish Ankara. In an effort to signal to the Congress that the administration was not giving Turkey a free pass, Trump issued an executive order that imposed penalties on three Turkish officials and two ministries for their role in the incursion into Syria. The president also announced that he was reimposing steel tariffs of 50 percent on Turkey and would halt trade negotiations with the country immediately. The sanctions were lifted after a ceasefire was negotiated by a team led by Vice President Mike Pence.

The Congress remains determined to not let Ankara off the hook. After the previous attempts by Sens. Bob Menendez (D-NJ) and Ted Cruz (R-TX) to pass the resolution were blocked by Republican senators at the request of the White House, the Senate passed a resolution via unanimous consent last week formally recognizing Turkey's genocide of the Armenian people. The Senate Foreign Relations Committee also voted to advance sanctions against Turkey for its military offensive in northern Syria and for its purchase of the Russian-made missile system. President Recep Tayyip Erdogan is furious and has threatened to shut down Incirlik air base, which hosts U.S. nuclear warheads, as well as Kurecik radar base. If Erdogan were to follow through on that promise, calls to withdraw U.S. nuclear warheads might intensify, heralding a new low in Turkey’s defense ties with the West.

As 2019 draws to a close, Turkey-U.S. relations remain as complicated as ever with no quick fix in sight.