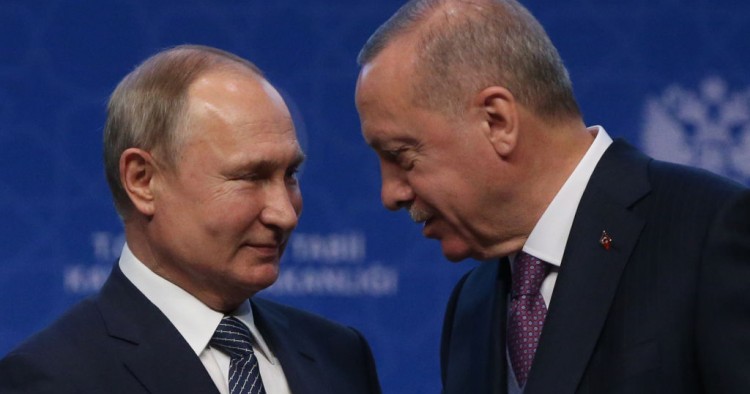 Russia and Turkey agreed to a cease-fire in Syria's war-torn Idlib Province between the Ankara-supported rebels and Moscow-supported regime forces. The truce came into force on Jan. 12 at 12:01 AM local time. At exactly the same time, another cease-fire, this time in Libya, came into effect as well. The one in Libya was also brokered by Russian President Vladimir Putin and Turkish President Recep Tayyip Erdogan during a Jan. 8 meeting in Istanbul. It is increasingly the case that the Russian-Turkish decisions on Idlib or Syria need to be understood as part of a broader Russian-Turkish partnership, which is expanding in the political, economic, and military spheres.

President Erdogan doesn't have the means to stop the Russian-backed regime assault. Both in Idlib and Libya, it is the pro-Turkish forces that are under attack. Their enemies are carrying out largely successful assaults. What Turkey can do is to slow down the offensives by the Syrian regime in Idlib and by Gen. Khalifa Hifter's forces in Libya until Ankara figures out what to do next. The cease-fires in Syria don't mean the conflicting sides recognize each other politically. That would have opened the door for a political solution. Instead, the cease-fires and de-escalation zones brokered by Russia, Turkey, and Iran have hitherto served the regime's pledge to gradually take back “every inch” of Syrian territory.

However, President Putin still wants to keep Turkey as a facilitator of a long-term resolution of the Syrian crisis, and Moscow would prefer to have Turkey on board rather than acting as a spoiler. Plus, neither Russia nor the regime is in a rush to capture Idlib. The Assad government could contend itself with taking control of the strategic M4 and M5 highways and thus connecting Aleppo and eastern Syria with Damascus and Latakia. Controlling the up to 3.5 million people in Idlib, the vast majority of whom are hostile to the regime, is not among Damascus' short-term plans. Russia, for its part, prioritizes a political solution to the Syrian conflict, which requires help from Ankara to keep the opposition under control. As for Turkey, there is no clear end game in Idlib. Sources close to the decision-makers in Turkey's security establishment indicate that Ankara's strategy relies partly on international pressure on Russia to prolong the rebel control of the area.

The Syrian rebels in Idlib, including the former local al-Qaeda branch — now Hayat Tahrir al-Sham (HTS) — which is in control of a significant portion of the province, and the pro-Turkish Syrian National Army (SNA), do not have many options. Groups that form the SNA initially believed that they were partners, if not allies, of Ankara in their war against the Assad regime. They have lately realized that they are probably just proxies, if not mercenaries, in Ankara's war. Today, many of them believe that Turkey has diluted the battle in Idlib by prioritizing its own against the Kurdish fighters in eastern Syria. Turkey has transferred a significant number of rebels away from Idlib to get them to fight against the Kurdish forces in eastern Syria as well as Hifter's forces in Libya.

A non-resident scholar at MEI, Guney Yildiz is a researcher and journalist based in London with a focus on Turkey, Syria, and the Kurds in the Middle East.