Dispatches from Sharm el-Sheikh: Reviewing COP27 from the MENA perspective 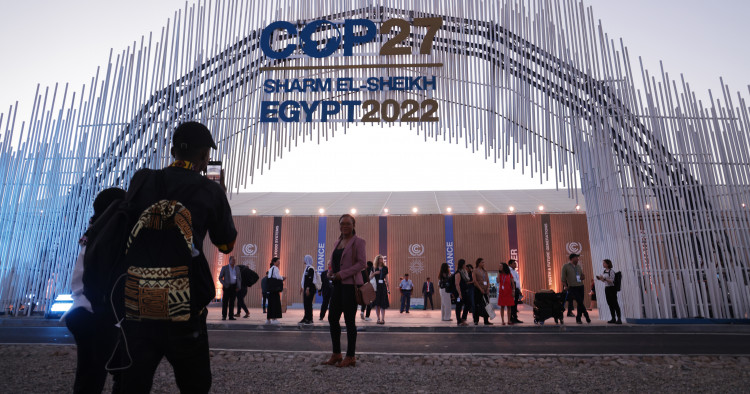 Several scholars from across MEI’s Egypt and Climate and Water programs attended the 2022 United Nations Climate Change Conference (27th Conference of the Parties, COP27) in Sharm el-Sheikh, Egypt, at various points during the two-week meeting spanning Nov. 6-18. In addition, MEI hosted a panel on the future of climate adaptation in Africa and the Middle East at the Egypt Pavilion that explored the adaptation opportunities most likely to help the global climate change management agenda achieve a more resilient future. Participating in COP27 provided a unique opportunity to view the proceedings firsthand and evaluate the effectiveness of the meeting in advancing critical climate priorities that can alter the alarming trajectory of future climate change.

Below, I summarize some of my thoughts, reflections, and analysis of the meeting as an attendee and the role COP27 played in shaping the climate change agenda of the MENA region.

Expectations from this meeting were very high, especially considering the underwhelming outcome of COP26 in Glasgow. There were expectations set forth by Egypt as the host of this year’s COP proceedings regarding the priorities it wanted to advance as part of the formal agenda. These priorities were, broadly, better climate financing and more adaptation (especially relating to water resources). Another expectation — stemming from earlier discussions at the Bonn Climate Change Conference — was the recognition of loss and damage as an important component of attaining climate justice and compensation for developing nations that have suffered the worst effects of climate change. The justification for such a concept could not be stronger, based on the impacts of climate change this year alone: crippling heatwaves afflicted multiple continents, intense flooding events caused severe damage, and dust storms reoccurred with alarming frequency. As such, it may have been inevitable that Egypt, which, as host, carried the banner for African countries likeliest to benefit most from loss and damage compensation, would move toward including the issue as part of the official COP27 agenda.

Several noteworthy developments relevant to the climate agenda of the MENA region took place at COP27, each of them providing long-anticipated details and progress updates. The Saudi Green Initiative made a huge splash in Sharm el-Sheikh by hosting a large exhibition and forum on the kingdom’s climate action goals. The exhibition was external to both the Blue and Green zones that made up the core of the COP programming (and just as impressive in scale), and it provided the largest information update on this initiative since the Saudis announced it ahead of COP26. Similarly, after last year’s cooperation between the United Arab Emirates, Jordan, and Israel on a renewable energy for water deal, COP27 saw the signing of a memorandum of understanding between the UAE and Jordan on renewable energy development. This step is an important precursor to the previously announced deal between the UAE, Jordan, and Israel and the first major update since its announcement almost a year ago. In conjunction with the unveiling of the UAE’s new National Net Zero by 2050 Pathway, which defines the emissions reduction the country will undertake through the middle of the century, these pronouncements were much needed to demonstrate the Middle East’s commitments to the global climate agenda.

The biggest news item to come out of COP27 occurred when climate negotiations reached an agreement on a climate loss and damage fund, nearly two days after the meeting was supposed to end. A clear victory for climate justice activists and developing nations, the loss and damage fund has the potential to alleviate the harm climate change has caused to the most impacted countries — many of which have contributed little in terms of greenhouse gas emissions. However, this triumph notwithstanding, the devil is in the details: Which countries will contribute to this fund? How large should the total target amount for this fund be? How will compensation be allocated to recipient countries? These questions and more will need to be addressed before the fund can be operational and effective in meeting its purpose. Thus, part of the agreement specifies the establishment of a transnational committee to add structure and detail to the mechanics of this financial vehicle, with progress expected at COP28.

While loss and damage took a huge step forward regarding realization, mitigation may not have achieved any progress at all. Pressure for more action to limit future global temperature increases to 1.5°C stalled out on several fronts. Instead of a phasedown of all fossil fuels, the final COP27 document only encourages a phasedown of unabated coal power and inefficient fossil fuel subsidies. Additionally, a proposal to commit countries to prevent their emissions from peaking beyond 2025 was unsuccessful. Juxtaposing the mitigation stalemate with the loss and damage agreement raises the concern that resolving past climate grievances came at the cost of not doing enough to advance mitigation efforts, which could potentially worsen climate change effects moving forward.

While some of the progress made at this COP was, indeed, very encouraging, particularly the agreement on the loss and damage fund, many items still need more clarity, require more action, or remain unresolved. For example, the mechanics of the loss and damage fund remain undefined, emissions reduction plans need to be more aggressive, and funding for climate change adaptation has yet to materialize at the levels pledged or required (only $20 billion of the not-yet-fulfilled $100 billion from developed states goes toward adaptation in developing countries, while the Adaptation Fund only received pledges totaling $230 million at COP27). These and other climate priorities (such as completing the global stocktake) will come to a head at COP28 in the UAE — placing significant pressure on next year’s host to deliver in areas that COP27 did not. The larger concern is that the more we delay action on critical climate priorities, the further behind the world gets in actually implementing actions that can prevent the worst consequences of the climate crisis that are still to come.

Mohammed Mahmoud is the director of the Climate and Water Program and a senior fellow at the Middle East Institute.