Erdogan pins his hopes on a meeting with Trump at UNGA 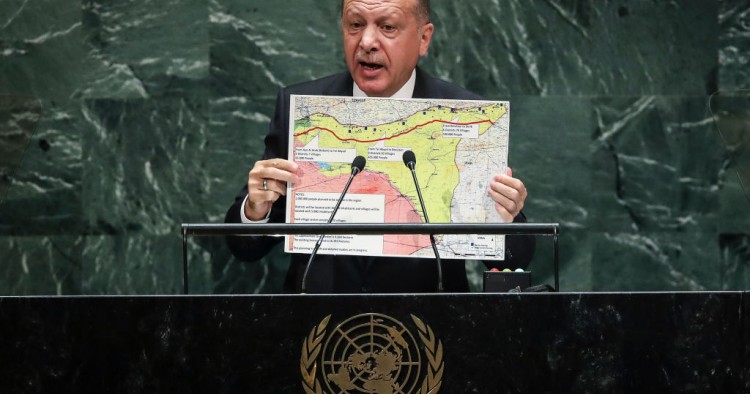 The Turkey-U.S. relationship has been going through one of the most difficult periods in its history. Not only are there clashing interests and diverging policies, but something that has saved the partnership from the brink of collapse in the past is not there anymore. There are almost no constituencies on either side of the Atlantic that would push to mend ties. In Washington, the Congress, the defense establishment, and even many around President Donald Trump see Turkey as a country that has become increasingly problematic for U.S. national security interests. In Ankara, anti-Americanism has been at an all-time high across the board. Yet, Turkish President Recep Tayyip Erdogan is still hopeful. He has put all his eggs in President Trump’s basket and thinks it will pay off. He pinned his hopes on a meeting with Trump on the sidelines of the UN General Assembly (UNGA), which the Turkish side has been pushing hard to arrange, to iron out differences.

Erdogan’s number one priority is to make sure the U.S. holds up its end of the safe zone deal reached between the two sides last month. Erdogan wants to use the zone to send back the millions of Syrian refugees Turkey is hosting. He will probably also use the opportunity to try to stave off sanctions passed by Congress to punish countries that make large purchases of Russian military hardware. Turkey purchased Russia’s S-400 missile system, prompting the U.S. to expel Turkey from the F-35 fighter jet program. In an effort to appeal to Trump’s soft spot for Erdogan, Turkey’s president recently said his country was ready to purchase U.S.-made Patriots as well, although the U.S. has announced the Patriot deal was off the table.

To talk these issues through, Turkish diplomats have been working hard to arrange a meeting. Erdogan is not on the list of Trump’s official meetings with leaders at the UNGA. The plan is to host both leaders at a dinner organized by the Turkish-American Business Council at a fancy New York restaurant. But the American side seems less enthusiastic. Given the intractable nature of problems in Turkey-U.S. ties, the outcome of a meeting with Trump is unclear at best. At this point, even the prospect of a meeting is far from certain, paving the way for another round of crisis in Turkey-U.S. relations if Erdogan follows through on his promise of unilateral military action against northeastern Syria should the U.S. fail to act.

Gonul Tol is the Director of MEI's Turkish Studies program.