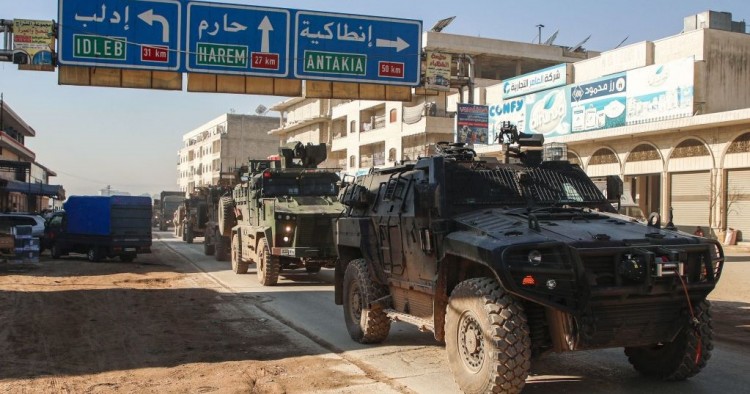 Turkish President Recep Tayyip Erdogan has been dialing up his criticism of Russia, a country with which Ankara has cultivated close ties and had refrained from attacking until recently. A few days after Turkey and Russia announced a cease-fire agreement in Idlib to stem the flow of civilians uprooted by the violence in Syria’s northwest, Erdogan criticized Russia for not abiding by the terms of the deal and vowed to step up support for rebel groups there. A more dramatic escalation of tensions happened over the weekend, however. Eight Turkish soldiers were killed in Syria’s Idlib Province after they came under heavy fire from the Syrian government on Sunday. The deaths are Turkey’s first fatalities as a result of direct confrontation with the regime since the civil war started in 2011. Erdogan said as many 35 Syrian government soldiers were killed in a retaliatory strike and up to 40 Syrian targets were being considered as part of the operation. The Turkish president has warned Russia not to “stand in the way.”

Idlib was bound to test growing Turkey-Russia cooperation because Turkey made several key miscalculations. Ankara made promises it could not keep and assumed that Erdogan’s friendship with Russian President Vladimir Putin and growing Turkey-Russia ties elsewhere would keep the cooperation in Syria strong. In 2018, Turkey and Russia agreed to enforce a demilitarized zone in Idlib and Turkey pledged to drive the “radicals” out, which turned out to be a more difficult task than Ankara had imagined. Ankara hoped that it could delay a regime offensive on Idlib long enough to allow time for international efforts to resolve the conflict politically to gain steam. It failed to grasp the regime’s resolve to retake Idlib and Russia’s resolve to support the regime no matter how many face-to-face meetings Erdogan and Putin held. Ankara assumed that once the U.S. leaves the Syrian theater, Ankara would work with Russia hand in hand to create a safe zone to resettle millions of Syrian refugees and kick the People’s Protection Units (YPG) out of the border region. Ankara failed to see that what made Russia sympathetic to Turkish goals and incursions in Syria was largely the presence of U.S. troops and that once they leave, Russia would have little reason to tolerate Turkey’s actions.

And that is exactly what has been happening. The U.S. has not left Syria completely but the reduced U.S. troop presence has complicated Turkey-Russia relations in Syria. To Ankara’s surprise, Russia has not been a better partner to Turkey than the U.S. when it comes to forcing the YPG out of the area along the border. On top of all those miscalculations, Turkey is also weakening the Syrian opposition further by enlisting them in its fight against Gen. Khalifa Hifter’s forces in Libya. Ankara may have hoped that somehow a miracle would result from its many policy blunders in Syria, but the escalating tensions between Turkey and Russia over Idlib did not come as a surprise to many outside the Turkish capital. More surprises might be in store for Turkey’s decision-makers as well. Ankara may now find itself having to work with the U.S., which just a few months ago it saw as the biggest impediment to realizing its goals in northern Syria, to counter the Russia-backed regime offensive in Idlib.