Israeli annexation “is a game-changer for us”: Prime Minister Mohammed Shtayyeh on the annexation threat, economic crisis, and COVID-19 in Palestine 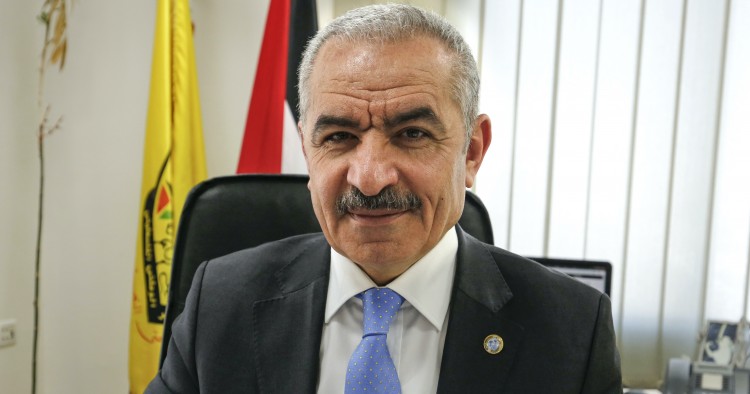 On May 12, 2020, MEI hosted Dr. Mohammed Shtayyeh, Prime Minister of the Palestinian National Authority, for a roundtable discussion on the many crises facing Palestinians and the Palestinian Authority (PA), from the COVID pandemic and the possibility of economic collapse to the imminent threat of Israeli annexation. The key issues framing this meeting include an anticipated announcement of annexation by the Israeli government, Palestine’s economic crisis, and a standoff over payments to Palestinian prisoners.

The most serious challenge now facing the Palestinians, according to Shtayyeh, is the looming threat of Israeli annexation. With more than 720,000 Israeli settlers living in Palestinian territory today, comprising more than 24 percent of the West Bank’s population, annexation would effectively end the possibility of a Palestinian state. In Shtayyeh’s view, annexation is already a matter of political consensus in Israel. For example, the political negotiations between former opposition leader Benny Gantz and Israeli Prime Minister Benjamin Netanyahu over the coalition government platform hinged not on whether or not to annex, but on where and how much to annex.

Even so, Shtayyeh stressed, annexation would put the “final nail in the coffin of the two-state solution” and would elicit a strong response from the Palestinian leadership. Shtayyeh made clear that Palestinians would not distinguish between an announcement of annexation by Netanyahu, which could take place this week, and the act of annexation itself, either of which would be “a game-changer for us.” As a result, Shtayyeh announced, the Palestinian leadership plans to convene a meeting with all Palestinian political factions, including Hamas and others, on May 16, to decide on an appropriate response to annexation. In the event that Israel announces an intention to annex parts of the West Bank, according to Shtayyeh, the leadership is expected to declare the cancellation of previous agreements with Israel. Among other things, said Shtayyeh, this means “there will not be any security coordination [with Israel] starting Saturday.” The Palestine Liberation Organization (PLO) Central Council has already taken such a decision, though it has not yet been implemented.

Given Israel’s repeated and ongoing violations of various aspects of the Oslo Accords, observed Shtayyeh, Palestinians cannot be expected to abide by them unilaterally. “How long can we really wait” declared Shtayyeh in response to a question on whether the Palestinians might delay any implementation of their decision until Israel actually moved to annex Palestinian territory. “We cannot sit blindly and claim we don’t see reality on the ground,” said Shtayyeh. “The future of a Palestinian state is being eroded every day.”

While Arab states and the EU have taken strong positions against annexation, according to Shtayyeh, efforts by the PA to write letters to Benjamin Gantz, speaker of the Knesset, as well as the Quartet powers to engage on this issue ahead of Secretary Mike Pompeo’s visit to Israel on May 13 have not been successful. He noted Gantz’s terse response to his letter, declaring that he (Gantz) would not allow his political positions to be defined by the Palestinians.

In Shtayyeh’s view, past negotiations had failed because they lacked clear terms of reference, which have not existed since Secretary of State James Baker laid them out ahead of the Madrid Conference of 1991. Since then, successive U.S. presidents have each tried to define their own terms of reference. As a result, the United States has not been an honest broker. In Shtayyeh’s view, any future diplomatic process cannot be monopolized by the U.S., but neither can it exclude the U.S.

Shtayyeh also discussed other challenges facing the Palestinians, most notably the dire financial and economic situation, which has been greatly exacerbated by the COVID-19 crisis. Palestine was already in economic crisis prior to the onset of COVID-19, which has forced the PA to put off its economic recovery plans. Yet, while all governments and economies have been hit hard by COVID-19, the PA faces three unique challenges: it cannot borrow from the IMF, as it is not a member; it cannot print money, as there is no national currency; and third, it has no cash reserves that it could draw on to offer something like a stimulus package.

Despite these limitations, Shtayyeh maintained, the PA had been able to mount a relatively effective response to the COVID crisis. The PA responded early to the outbreak by closing schools, mosques and churches, and other public spaces, and by imposing movement restrictions within and between Palestinian localities, which are now gradually being relaxed. Shtayyeh highlighted recent efforts by the PA to mitigate the worst economic impacts, including paying civil servants full salaries for March and April, a paid social allowance to 125,000 families, cash assistance to 42,000 newly unemployed workers and 50,000 newly impoverished individuals, as well as a package of loan guarantees for $500 million at 1.5 percent.

Despite ongoing tensions between Fatah and Hamas, the PA considers that it still bears responsibility for developments in Gaza and has allocated a substantive portion of its budget and assistance received from abroad to Gaza. Meanwhile, resolving the ongoing split between Fatah and Hamas, in Shtayyeh’s view, would hinge on the holding of new elections. For the time being, however, Palestinian reconciliation efforts remain frozen, in part due to the COVID crisis, but also due to Israel’s refusal to allow Palestinians in East Jerusalem to participate in PA elections.

Compounding Palestinian economic woes is Israel’s decision to withhold VAT and other tax revenues collected from Palestinians on the PA’s behalf. According to Shtayyeh, Israel has deducted more than NIS 1 billion (~$285 million) in tax money owed to the Palestinians as punishment for the PLO’s provision of welfare payments to those killed or imprisoned by Israel. One million Palestinians have been subject to Israel's prison system since 1967, explained Shtayyeh. Moreover, Shtayyeh observed, these allowances are both a legitimate form of welfare that any government, including Israel, would undertake and a crucial tool in countering extremism and alleviating extreme poverty. Given the PA’s dire financial situation however, Shtayyeh explained, the matter of Israeli tax transfers to the Palestinians remains unsettled. Specifically, the PA has submitted a request for an advance of NIS 200 million (~$60 million), to which the Israelis have yet to respond.

Jessica Agostinelli is MEI's Program Director. Khaled Elgindy is a Senior Fellow and the Director of MEI's Program on Palestine and Palestinian-Israeli Affairs.