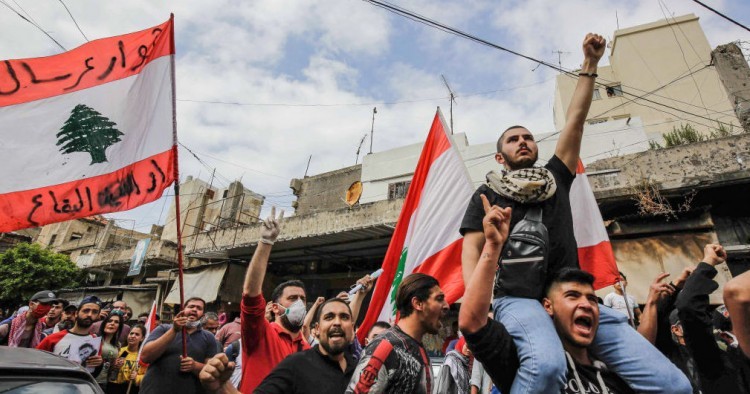 30 years since end of the Lebanese civil war, the ruling oligarchy has brought the country to utter bankruptcy. Two months into rescue negotiations with the IMF, the various power centers cannot even agree on common figures and a common strategy for the talks. Meanwhile, the Lebanese currency is in free fall, and hundreds of thousands of Lebanese are hurtling into poverty and face the risk of hunger. The state is teetering on the brink of collapse as salaries to the public sector, and particularly to the important army and internal security forces, dwindle into insignificance; with the rising tide of social desperation, this risks the spread of social unrest and the prevalence of armed conflict.

The Lebanese government led by Hassan Diab has so far proven powerless to unify Lebanon’s approach to the IMF, with the government, the central bank, and private banks feuding over the estimated losses in the three sectors. The government claims $69 billion in losses, while the banks estimate around $32 billion. The political struggle over these numbers boils down to whether the oligarchy, and its web of interests in the government and the banks, will pay up for these losses, or whether they will be shifted largely to the population through the free fall of the currency. Unsurprisingly, it’s the latter strategy that is unfolding.

The crisis must now be measured in days and weeks, not months. As several experts have argued, the government must move immediately to slow the fall of the lira, urgently build up social safety nets, and focus on accessing short-term support for these pressing social needs. The World Bank’s Social Assistance Loan of $300 million has itself been held up by government red tape. There are other sources in Europe and potentially the Gulf, that could offer some support if it was clearly targeted to the immediate needs of the population. Such an immediate program would give the people a desperately needed safety net, while the oligarchy continues to bicker.

At the end of the day, Lebanon needs a new political class. The revolt of October 2019 indicated an appetite and groundswell for change. Whether that dynamic will translate into a coherent national movement that can bring real change to the country, or whether it will peter out or be outmaneuvered by the oligarchy, is the real question at play in Lebanon in the year or two ahead. The economic breakdown can spell the collapse of the oligarchy, or can be an opportunity for them to rebuild their control over an even more impoverished populace. The population has an overwhelming say in its future. But history has to be made; it doesn’t make itself.

Paul Salem is the president of MEI. The views expressed in this piece are his own.