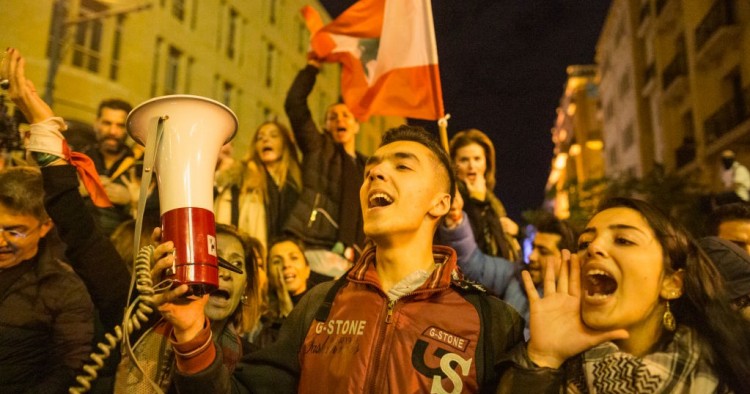 I did not expect this many responses, both positive and negative, to my article. Many have come from the protest movement in Lebanon, some from the Lebanese diaspora, and the rest from Lebanon observers. I say this with the utmost sincerity: I’m both grateful and humbled. I owe the readers, and especially the critics, a brief rejoinder only because this is an important conversation through which further light can be shed on a complex, historic, and fluid situation in Lebanon.

I received three constructive criticisms, all of which deserve some treatment, or at least mention.

First, I argued that Lebanon has had free and fair elections since Syria’s military exit from the country in 2005. According to the critics, this is inaccurate. It’s a point that seems to have especially bothered many protesters because, in their view, the corrupt politicians — or let’s call them the pro-status quo forces since it’s a large chunk of Lebanese society that’s much broader than the much reviled gang of Lebanese oligarchs — are using it to bring down the uprising or render it illegitimate.

Those making this point claim that several independent committees throughout this 15-year period issued reports attesting to electoral fraud. The latest parliamentary elections in 2018 are a case in point, with several civil society candidates claiming they were robbed of their seats due to faulty counting by the Lebanese authorities. The Lebanese Association for Democratic Elections was vocal about these likely transgressions, among others.

It’s futile and wrong to insist that the elections in post-Syria Lebanon were perfect. There’s no question that fouls were made and injustices were committed. But how systematic were those? In other words, were they so organized, significant, deliberate, widespread, and consistent that they denied the anti-status quo forces any opportunity to bring about change? I don’t know the answer to that question. But it’s worth noting that most if not all these elections were also monitored by international bodies on the ground, and none concluded that there was systematic electoral fraud.

Second, the critics say that it’s too early to judge that the protest movement has failed, and that real change doesn’t happen over a period of a few months. That’s very true, but I never claimed that uprisings are short-term affairs. I erred by not clarifying what I meant by failure: the inability to force the ruling class to adopt a truly reformist agenda and create a truly independent cabinet made up of technocrats. I went on to list the likely factors contributing to such a failure – disorganization, disunity, lack of leadership, and ineffective strategies — all of which are hard to refute. I also said, and here lies the crux of my article, that even if the protesters scored very high on all these variables, the outcome might have been the same.

The issue is not how long it takes to uproot a deeply-rooted sectarian system — we all agree that this is a generational fight that may have just started — rather, it’s whether the protesters (I use the term loosely here because I recognize that they’re not a monolithic bloc) have come up with a proper diagnosis of the challenge. They have directed all their anger at the corrupt politicians and blamed them for their predicament. That’s totally fair, and all should be held accountable if justice is ever to prevail in Lebanon, but the hard part is to try to understand why these politicians have survived for this long and seem untouchable. You can call them crooked, evil, and even soulless, and all of that would be true, but you can’t deny that they have broad-based societal support, and until their constituencies are convinced of the need for the changes the protesters are calling for, the system will remain. So, this is not about “us” vs “them,” more like “us” vs “us,” and the only way to reconcile this peacefully — because no society in the world is in perfect harmony or unity on everything — is through the ballot box.

Which brings me to the third point: the need for early elections because the current government shouldn’t be allowed to make any drastic decisions in the absence of authority and legitimacy. I wrote that early elections should be held “sometime in the next few months.” The response was that this would be a disaster for the protest movement because the current electoral law is still flawed and would most likely empower the same leaders.

I’ll concede on that point, but let me add this: in the absence of consensus in the current Lebanese Parliament (which, by the way, is dominated by pro-status quo forces) on the need for a new electoral law, how do the protesters envision moving forward on this issue? More protests? Maybe that’ll work, maybe it won’t. Keep in mind that this is all being played out under circumstances of extreme financial hardship. A likely compromise, which will be extremely hard for the protesters to entertain (and I get it), is to use the current electoral law, despite all its flaws, and focus on getting as much civil society representation as possible under the watchful eyes of international monitoring agencies. Maybe that won’t amount to much, but find me a better alternative.

I’ll conclude by saying that the demonstrations have undoubtedly challenged some aspects of the sectarian identity of parts of Lebanese society. A sense of shared destiny and citizenship has been felt among many. I am not underemphasizing any of those remarkable successes. But these societal changes alone will not fulfill the dreams and aspirations of the protesters. Political negotiation and yes, compromise, at least in the short term, are necessary. If the road ahead is long, as we all agree it is, then some candid self-examination and a healthy dose of realism are in order. The cause of freedom in Lebanon deserves it.