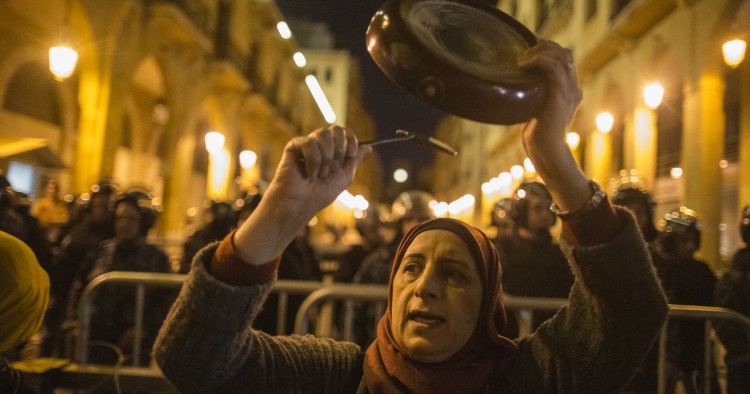 Note: In response to numerous comments from readers about this piece, author Bilal Saab has published a brief rejoinder on the MEI Insights blog.

By any objective standard, the Lebanese protest movement has failed. This is not necessarily an indictment against it. Rather, it’s a reality one cannot and should not ignore. The responsible thing to do now is to try to understand why it has fallen flat, despite more than 100 days of demonstrations in various regions of the country, including the capital, Beirut.

First, a word of solace. In the annals of history, the Lebanese are in good company as most uprisings and revolutions failed to attain their goals. And even when they did, success often didn’t last long or was completely reversed due to counterrevolutions and other spoilers, both foreign and domestic.

There’s also nothing unusual about where the Lebanese protesters might have erred. Most others throughout history were unable to achieve their demands because they didn’t marry their vision with organization. They weren’t united and sometimes lacked sufficient numbers (although the relationship between size and success in this context is complicated). Their expectations were unrealistic, and their strategies for change — peaceful or violent tactics, centralized or decentralized activism, with or without leadership, acceptance or rejection of negotiations with the government — were ineffective. The Lebanese protesters check most if not all of these boxes.

Yet as ordinary as the shortcomings of the Lebanese protesters and dynamics of the uprising are, some are extraordinary. Unlike many other uprisings, Lebanon’s didn’t really have to contend with violent, oppressive powers at home and abroad. To be sure, the country’s security forces have increased their crackdown on the protesters of late and at times failed to protect them from Amal and Hezbollah’s counter-demonstrators. But compare that to the bloody and catastrophic cases of Egypt, Syria, and others in the region and you’ll come to one conclusion: the Lebanese uprising has had a relatively permissive security environment. There is no mad dictator in Beirut and there are no foreign armies on Lebanese soil bent on crushing the uprising. There’s Hezbollah, of course, which has every interest in blocking change that would challenge its political dominance and military autonomy, but for its own pragmatic reasons, it has refrained from using violence, at least systematically, to stop the protesters. In this regard, the Lebanese demonstrators have luckily avoided what is often the biggest killer of all uprisings: the use of brute force by the authorities and their supporters.

And yet, the protesters have been unable to meet any of their demands. Why? Is it because the variables listed above are lacking? Sure, that’s one answer, but it would be a partial and disingenuous one. I suspect that even if the Lebanese protesters had impeccable organization, a charismatic leader, a credible program, strong unity, an effective strategy, and larger numbers, they still wouldn’t be able to “fire all the country’s oligarchs,” as they say they want, and put in place a new political foundation. That’s because the Lebanese uprising has revealed some inconvenient truths about the country that have been buried for a while. I can think of at least a couple.

First, the distinction between “the government” and “the people” is more imaginary than real. This makes it much harder to tell who the good guys and the bad guys are, the oppressors and the emancipators, and the defenders and the opponents of the social contract the Lebanese built almost eight decades ago. This complex societal equation would have been a lot easier to explain to non-experts had Lebanon been a dictatorship or monarchy like most other nations in the Middle East. But it is a democracy, and national and municipal elections, at least since Syria’s military exit from the country in 2005, have been fair and free. This means that for the past 15 years at least, the Lebanese people have been able to elect their representatives without any pressure or intimidation tactics by the authorities. As Faysal Itani poignantly observed, “These politicians and parties were not imposed on the Lebanese.”

I am not suggesting that the Lebanese deserve their current misfortune. I am simply stating the fact that there is nothing about the current crisis that was inevitable or unavoidable. It’s true that a large portion of Lebanese society has finally woken up and realized how rotten the country’s politics are, but even on its best day, the protest movement totaled roughly one million people. That’s impressive and historic, but still less than a quarter of the Lebanese population.

What about the other three-quarters? Since there’s been no credible polling, I cannot presume to know what their thoughts and feelings are about the uprising. Some, I’m sure, sympathize with its demands but can’t take to the streets for various reasons. But others, seemingly in the majority, want the uprising to end. The critics, skeptics, and protectors of the status quo are obviously hurting economically, like most people are, but they’re not ready to condemn or uproot the country’s sectarian and yes, feudal, system. This is what they’ve lived with all their lives. This is what they’ve always known. They simply have no desire to start over on the basis of new and unproven principles.

Then there’s the mother of all inconvenient truths, which is that Lebanon isn’t in this mess because of Hezbollah. Don’t get me wrong, Hezbollah is an enormous problem because it has hijacked the country’s politics and it only answers to a foreign power. But it is not the root cause of a failed system that has brought nothing but political ruin and economic bankruptcy. This is a collective Lebanese failure, resulting from an understanding among the ruling class stipulating the following: Hezbollah endorses the widespread corruption of the other sectarian leaders, and in return it gets to control matters of war and peace, throwing both the concept and practice of accountability out the window.

So, how can the current deadlock be broken? In a democracy, you typically return to the ballot box because all power ultimately belongs to the people. Except that Lebanon’s democracy is anything but typical. The system allows for all the political and religious freedoms you can think of, and that’s a rare blessing in a region governed by tyranny, but it doesn’t possess a culture of democracy (i.e., values, norms, etc.). Indeed, Lebanon is a democracy without (many) democrats, as Lebanese academic and former Minister of Culture Ghassan Salame once wrote. Had there been any, they would have resigned collectively and immediately given the unprecedented demonstrations, formed a temporary emergency cabinet, and gone to early elections. But the country’s political leaders did none of those things. In fact, by forming three months later and without a shred of transparency a shadow government that’s subservient to their interests, they did precisely the opposite.

Could they have committed these sins and many others before had they not had enough backing, or at least passive acceptance, from their sectarian communities and support bases? The sad but honest answer is no. One wonders how bad things would have to get for this patron-client relationship found in all Lebanese religious communities to end and be replaced by a concept that seems foreign to the country yet so central to democracy: citizenship. I recall a powerful encounter in Downtown Beirut between a female protester and a supporter of one of the ruling parties. She asks him: “Look at you, you’re tired, you’re hungry, and you must have no job, why do you still support your leaders?” What a remarkable question, and yet we don’t have a clear answer. It’s also a reminder that not all political decisions are rational, especially in Lebanon.

Assuming the current political order survives, the next opportunity for the Lebanese to vote their leaders, and this flawed system, out is 2022 (that’s also assuming the protest movement doesn’t fizzle out or die by then). Given that the country is currently on the verge of total financial collapse, that’s an eternity from now. Lebanon might stay afloat until then with the possible help of international donors who are trying hard to balance between not rewarding corrupt politicians and not letting the country slide into complete anarchy. But the fundamental problems of Lebanon’s democracy will remain, until a true social revolution takes place and sets the country on a new and more stable political and economic path.

This may not be a very popular thing to say, and it may end up being unwise, but I wholeheartedly oppose any sort of bailout or drastic international assistance package to Lebanon — not that one is in the works or around the corner anyway — in the absence of a government that enjoys legitimacy or the confidence of the Lebanese Parliament. You can’t start anew in Lebanon with a cabinet that simply doesn’t have the right and authority to make monumental decisions for the entire population that will have ramifications for years and perhaps decades to come.

The wisest course of action for potential donors is to do the bare minimum to prevent things from totally falling apart, including humanitarian assistance, while pushing the Lebanese government to endorse early elections sometime in the next few months. Yes, that sounds like a violation of sovereignty, but let’s get serious, what sovereignty and leverage does Lebanon currently have? None. Give the Lebanese people a chance to rewrite, or preserve, their history. If they still elect the same leaders, then you, as an external supporter, will better understand how to tailor, calibrate, or limit your assistance. But if they manage to kick some (and hopefully most) out, then you’ll have a new and uncorrupt constituency to work with.