Lebanon’s leap into the unknown 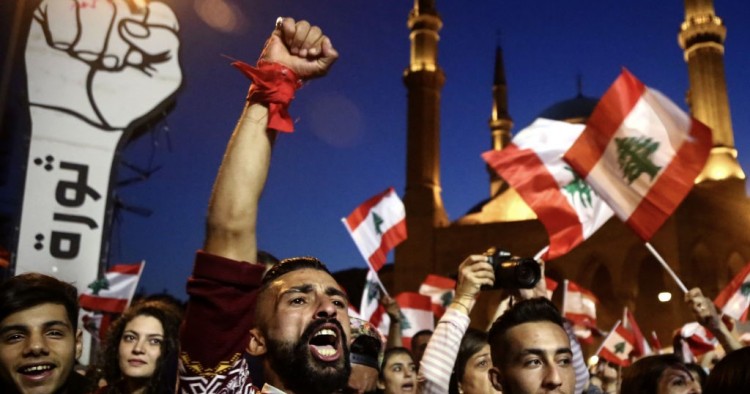 On a recent trip to my native Lebanon I looked on its ongoing, unprecedented protests with both wonder and worry. The country is a month into widespread anti-government demonstrations. The protests’ scale ebbs and flows but the relative calm during my stay had a fleeting if not sinister quality to it. That calm is unraveling. However this chapter of Lebanon’s history unfolds, this complicated country has changed irreversibly.

The protesters’ anger has focused on a traditional political class that, while bitterly divided by sect and foreign alliances, has collectively presided over decades of poor governance, corruption, and accelerating economic decay. Lebanon has been unlucky too, exposed to massive refugee flows from the neighboring Syria civil war and intermittent wars between Israel and Hezbollah, which has Iranian support and a militia that rivals the Lebanese military. But the Lebanese are blaming much of their predicament — unemployment, poor infrastructure, inflation, economic stagnation, and the multiple indignities of their everyday lives — on the country’s venal political class.

These politicians and parties were not imposed on the Lebanese. The country is no Middle Eastern autocracy but an electoral democracy, albeit a “confessional” one in which political power is shared among sects per decades-old formulae. These leaders are by and large freely elected. Some are personally popular but generally support is less a reflection of public goodwill than of people’s dependence on elites’ two main offerings: patronage and protection. For decades the population’s dependence on their leaders for jobs and benefits, and their sectarian suspicion toward one another, postponed a reckoning for Lebanon’s elites.

Despite decades of serial crises and poor governance Lebanon has never seen such a large-scale uprising against its political class. The geographic breadth, persistence, and uniformity of the protests is therefore their most significant quality. Even as a skeptical observer of and occasional participant in Lebanon’s demoralizing politics, walking through the crowds on Beirut’s Martyrs Square I could not help feeling moved by the movement’s energy, boldness, and optimism despite the formidable obstacles it faces.

Those obstacles loom ever larger. Despite the uprising’s size and enthusiasm, it is not the only story playing out in Lebanon. Protesters have come under attack by partisans of the powerful militia Hezbollah, and its vocal opposition managed to lower Shi’a participation in the protests. The uprising has remained largely peaceful not least because the military has mostly refrained from cracking down on the protests, even though they have blocked roads and caused light property damage. This relative calm may not hold, however. One protester has been killed by a member of the security forces; he was immediately handed over to the judiciary. Especially worrying is a trend of violence against protesters by members of Military Intelligence, known to be close to Hezbollah. Meanwhile the Lebanese Armed Forces have struggled to keep roads open, and in that pursuit they have detained a number of demonstrators.

Hezbollah is not the only political party with followers skeptical or hostile toward the protests. After the latter forced Sunni Prime Minister Saad Hariri to resign, his supporters rallied both to praise his courageous decision and insist it was unfair that only the country’s Sunni leader had resigned — why had the Shi’a speaker of Parliament and Christian president not done the same? Soon after that and even as the leaderless protesters began gathering for another demonstration in Beirut, the president’s party, the Free Patriotic Movement (FPM), held its own defiant (and well-attended) rally emphasizing that the FPM was the historic party of anti-corruption and represented the real reform movement in Lebanon. A protest against the protests.

It has quickly become clear that the uprising has powerful opponents who enjoy significant support. This has confused the picture of what is happening in Lebanon. In my conversations with party supporters some professed sympathy for both the protests and their own political leaders at the same time. One Sunni party supporter told me she had initially joined the protests but grew alienated by demonstrators' vocal denunciations of her own favorite leader. By contrast another long-time FPM supporter shunned the party’s counter-rally to join the popular protests against the political elite. Many Shi’a continue to protest the regime, even though they feel some affinity toward Hezbollah, which is defending the establishment.

Clearly many Lebanese, despite participating in a national protest movement, remain tortured by their conflicting loyalties, sectarian anxieties, and lack of organized leadership. This reflects the country’s complexity but also the extent to which Lebanon’s political elites have mastered the game of politics, economic patronage, and sectarian manipulation. This is not lost on the Lebanese. One working-class Lebanese explained he was among the first to protest until he realized many around him drew the line at their own leaders, telling me: “If you’re not willing to shoot your zaim [traditional leader] to protect the protest movement, then this revolution is pointless.”

The movement must also contend with its inherently disruptive effects on everyday life through road closures, business disruption, and weakening already-dismal economic sentiment. Though the public frustration is mitigated somewhat by sympathy for the protesters’ grievances, it will rise in the very likely event that the political class digs in its heels and ignores demands for substantial change. While the regime would likely bear much of the blame, a movement for security and dignity can ill afford to be seen as contributing to economic collapse.

Over the next few crucial weeks protesters will grow impatient with the lack of progress. The regime’s response to their demands has fluctuated between vague patronizing promises and utter contempt. In an interview President Michel Aoun suggested Lebanese who are unhappy with the political class are free to emigrate. Politicians have put forward Mohammad Safadi, a billionaire and former lackluster minister whom many in the protest movement regard as being complicit in corruption, to replace Hariri as prime minister. The protesters predictably rejected this as business as usual. Meanwhile Lebanon’s economy will likely worsen, with or without continued protests.

Despite these challenges something important is happening in Lebanon, though it can be difficult to discern from afar. Moving through the makeshift protest camps I came across multiple informal “town hall” meetings in which citizens spoke on various topics. Some had little concrete expertise but one gathering featured an economist explaining to a substantial crowd the implications of the dollar peg and a floating exchange rate. Another spoke about the procedures involved in lifting banking secrecy for suspect politicians. In one instance a spokesperson for a much-reviled foreign minister showed up to explain his party’s position to a hostile crowd — unusual for Lebanon’s usually aloof, unaccountable elite.

Discussions of actual policy as opposed to zero-sum sectarian competition are uncommon in Lebanon and could indicate the emergence of something resembling a civic identity and consciousness. This will have important long-term implications that outlive whatever political developments come next, including the cabinet’s makeup and the prime minister’s identity. Although the political elite are well-placed to retain control of formal politics and manipulate sectarian sentiments to preserve power, the emergence of real civic life creates a political space in which traditional politicians have far less if any leverage. Sectarian politics in Lebanon will not disappear anytime soon, but they may finally have some competition.

For arguably the first time one can discern a national opposition to the Lebanese elite. That alone is a momentous step but the hard work of politics has only just begun, and here the movement is hampered by inexperience, lack of leadership, and its own contradictions, which reflect Lebanon’s. It also faces a regime that may simply be too strong and deeply-entrenched to make concessions, leading to a prolonged crisis of political legitimacy amid economic decay and deepening civil unrest. Some protesters seem to agree. As I rode to Beirut Airport through the dawn hours, they had already begun dragging burning garbage containers to block roads and reaffirm their demands for a new, non-partisan cabinet. The protests continue. The regime has made no concessions. However this messy chapter of Lebanese history unfolds, it has changed the country, even as the Lebanese themselves seem utterly bewildered over what that could or should mean.

Faysal Itani is a nonresident senior fellow with the Atlantic Council’s Rafik Hariri Center for the Middle East, where he focuses primarily on the Syrian conflict and its regional impact. He is also an adjunct professor of Middle East politics at George Washington University. The views expressed in this article are his own.