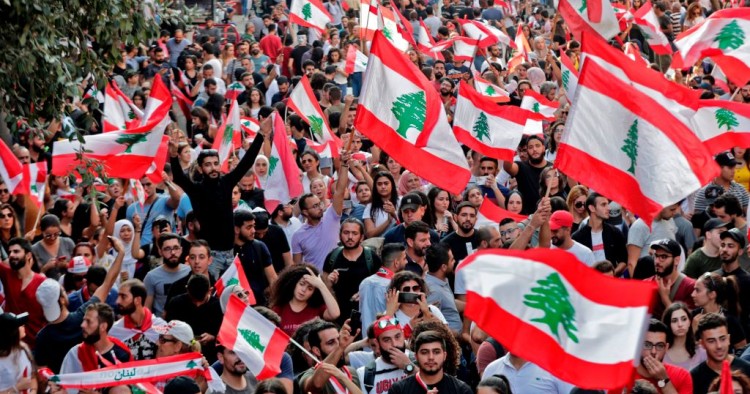 Since last Thursday night, Lebanon has witnessed what are arguably the largest protests in its history. Protesters are demanding the downfall of the entire ruling class, which seems unlikely due to a lack of immediate replacements. But what is clear, however, is that the protesters will not leave the streets following Prime Minister Saad Hariri’s much-anticipated speech on Monday in which he announced new measures to address Lebanon’s economic crisis.

Initial reactions to a government deal on the 2020 state budget and badly needed economic reforms were angry, prompting hundreds of thousands of protesters to take to the streets across the country. Demonstrators in Beirut’s Martyrs’ Square were infuriated that Hariri downplayed their demands. He proposed a few measures that are crucial to addressing the economic situation, but it is unclear if the changes can actually be carried out by the current political leadership.

Hariri said that new taxes would not be imposed on citizens and that there would be 50 percent salary cuts for current and former members of parliament and ministers. The prime minister also welcomed the protesters’ calls for early parliamentary elections. If these take place, the general public will need to be prepared to put alternative names forward and vote. In the 2018 elections, voter turnout was low, at a reported 40 percent.

The country has been paralyzed since last week, and the question now is how sustainable the current protests are. Banks, government institutions, and schools have all been closed, and it remains to be seen if security forces will intervene to open blocked roads soon.

If the crowds continue to take to the streets, Hariri’s resignation seems inevitable, but what comes next is a big question mark. Currency depreciation, complete economic collapse, and political vacuum could be imminent. Yet there will be an opening for some new faces — not all — to grasp the opportunity and put the country on the right track toward full independence, sovereignty, and economic prosperity.

Joseph Haboush is a non-resident scholar at MEI, the Lebanon & Online Desk Editor at The Daily Star, and a Middle East reporter for The Telegraph.