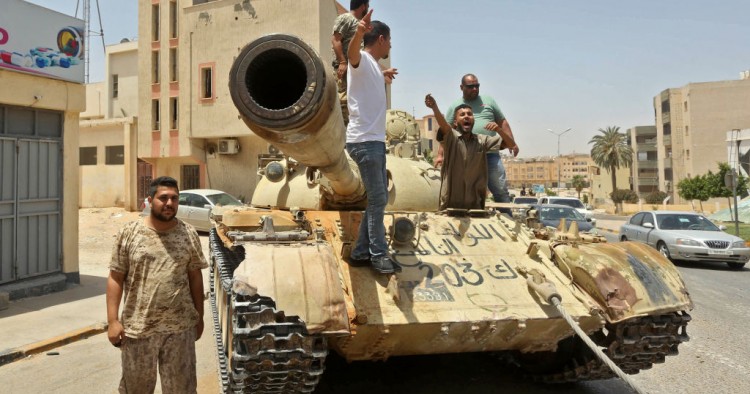 Coming on the heels of a string of military successes by the Turkey-backed Government of National Accord (GNA), the recent withdrawal of the Libyan National Army (LNA) from Tarhuna removed Gen. Khalifa Hifter’s last stronghold around Tripoli and dealt a fatal blow to his calamitous 14-month attempt to subdue Libya by military means. Not everything is destined to change though as a result of this most significant turning point.

Hifter’s downfall arguably started not months ago, when the balance of power was gradually reversed thanks to Ankara’s military involvement. Rather, it should be traced back to his hubristic decision to launch the April 2019 military offensive in the first place. That reckless deliberation showed key Libyan stakeholders that the general’s personal ambitions trumped any other interest. It exposed the limitations of an intemperate commander whose assets — both political and military — have been consistently over-estimated. The failed military campaign in the west is now compounded by the fragmentation of Hifter’s domestic base in the east and the erosion of international support.

Recent developments also demonstrate that military means remain key to political outcomes in the post-Arab Spring MENA region. Although the politically correct mantra maintains that there are no military solutions to the region’s conflicts, Libya — after Syria — is yet another regrettable demonstration of the fact that military force is a crucial factor. With Hifter’s own circles now calling for a halt to violence, a diplomatic solution may be back on the table. But as the GNA’s Sirte offensive shows, the confrontation is hardly over and meaningful talks will only start when military gains have been exhausted.

Although Hifter’s international supporters are in a tough spot as a result of their association with a hard-to-restrain leader, they are not out of the equation, as the recent Cairo initiative made clear. While only time will tell which faction will ultimately gain the upper hand, European and Western actors risk being among the net losers. This applies to countries like France that chose one side as well as to Italy that did not put teeth into its UN-centered approach. Ushered in by a NATO intervention almost 10 years ago, post-Gadhafi Libya is set to remain on an uncertain trajectory at best — one further removed from Europe’s orbit.

Emiliano Alessandri has managed the OSCE's Mediterranean Partnership portfolio since 2013. He is a non-resident scholar with MEI and an expert on Euro-Mediterranean relations with a focus on North Africa. The views expressed in this piece are his own.