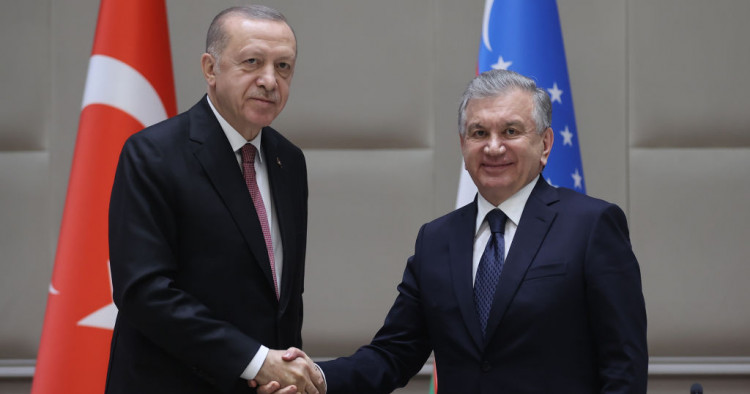 This article was first published in The Turkey Analyst.

BACKGROUND: Uzbekistan is the geographic pivot of southern Eurasia, the central connectivity node linking China with Afghanistan, Pakistan, and Middle East. In April 2022, Uzbekistan unveiled its development strategy for 2022-2026 at the Shanghai Cooperation Organization. In a symbolic first, indicative of the economic power shift in Central Asia, the document was written and published in the Chinese language. As Moscow has redirected its attention and resources away from Central Asia to Eastern Europe, Beijing has emerged as Uzbekistan's primary economic partner, consolidating it influence over the connectivity architecture of the region.

In 2021, China was Uzbekistan's largest export market, exporting $1.74 billion of goods compared to $1.70 billion of exports to Russia. Uzbekistan is an important source of mineral fuels, cotton, copper, and inorganic chemicals for China. With Uzbek banks concerned about running afoul of secondary sanctions if they continue to receive credit from sanctioned Russian financial institutions, a further turning to China as an alternative source of financing is likely. With an eye toward Uzbekistan providing China overland commercial connectivity to Europe, the Middle East, and South Asia, Beijing has been cultivating its relationship with Tashkent. China is Uzbekistan's largest source of foreign investment, exceeding Russian investment by over twofold.

Given that upwards of 90% of China's current rail freight to Europe passes through Russia, Beijing is looking to Uzbekistan to diversify its trade corridors by providing a China-to-Europe commercial rail transportation route that does not traverse Russian territory. The 4,380 km China-Kyrgyzstan-Uzbekistan (CKU) railway project from China's Lanzhou through Xinjiang province and southern Kyrgyzstan to Tashkent forms the key connectivity link that would extend China's reach to the Persian Gulf via Iran and to the Mediterranean via the Caucasus and Turkey. The CKU railway provides a significantly shorter route for China to reach the Middle East and southern Europe than the current alternative that crosses through Kazakhstan.