Russian-Turkish border deal on Syria holds, but the Western response is muddled 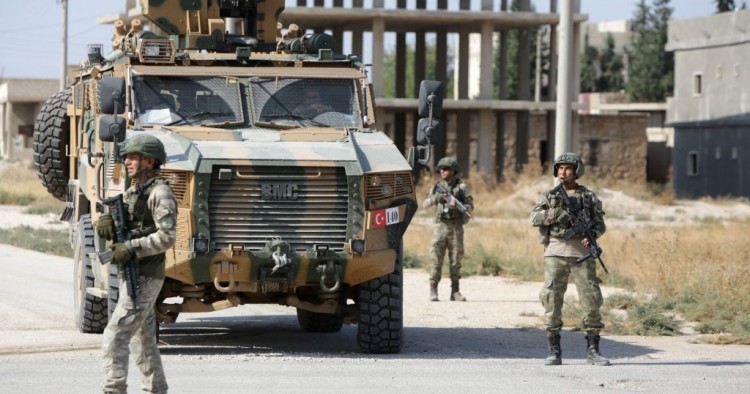 Nearly a week on, the Russian-Turkish deal for the Kurdish-led Syrian Democratic Forces (SDF) to withdraw from the Turkey-Syria border is holding. After raising objections to some of the articles of the agreement, the SDF coalition agreed to implement the Russian initiative. Turkish President Recep Tayyip Erdogan has hailed the agreement, reached on Oct. 22, as a victory.

Moscow’s argument to the formerly U.S.-backed SDF is clear: If the SDF doesn’t withdraw, Syrian and Russian military will move away from the border and leave the SDF to deal with the Turkish military with its full air supremacy. When it comes to Ankara, Russian proposals are also explicit: If the Turkish government wants to address its perceived security threats emanating from beyond the Syrian border, then it needs to deal with Damascus, through a previously defunct security deal from 1998 known as the Adana Agreement. Russia is also clear in its policy toward northeastern Syria: The future of the region will be determined through talks between the representatives of the Kurds, who traditionally live in the area, and Damascus.

What is unclear is the Western response to these Russian moves. There have been two counter moves from the West since the Russian-Turkish deal for northern Syria. Firstly, German Defense Minister Annegret Kramp-Karrenbauer presented to NATO her proposal for an internationally protected security zone in northern Syria. Kramp-Karrenbauer suggested a demilitarized zone involving Turkey and Russia. Secondly, President Donald Trump said he wants the U.S. to guard the oil in eastern Syria, adding that he wants Syrian Kurds to make money off of it.

Germany’s Syria proposal has already fallen flat, as it has run into resistance both in Germany and with Turkey. It is also unclear why Germany, which shied away from taking a more serious role in Syria helping Washington when the U.S. military was protecting the region and the Syrian Kurds were asking for the establishment of such a zone, waited until after the U.S. has left the area.

The U.S., however, can implement President Trump's proposal independently, without necessarily negotiating it with any other international force, although Washington will need local support for its presence in an area where ISIS is at its strongest. Deir ez-Zor, one of the main regions in eastern Syria that will see the deployment of several hundred U.S. soldiers, is an area where the Kurdish-led SDF isn’t in full control. The president’s argument that U.S. control of the oilfields will deprive ISIS of revenues if the group resurges contradicts his earlier claim that ISIS is “100% defeated.” It also contradicts the president’s claim that the U.S. left Syria to bring the troops home. Trying to control an area by the Iraqi border against ISIS and presumably also to put pressure on Iran will be difficult to implement militarily as the U.S. will be in control of a very limited area which could potentially be surrounded by a variety of hostile forces ranging from ISIS to pro-Iranian militias on the Iraqi side.

This latest episode also lays bare the main problem at the heart of U.S. Syria policy: the lack of coherency and clear direction.

A non-resident scholar at MEI, Guney Yildiz is a researcher and journalist based in London with a focus on Turkey, Syria, and the Kurds in the Middle East.