Storms on the horizon for Turkey in 2020 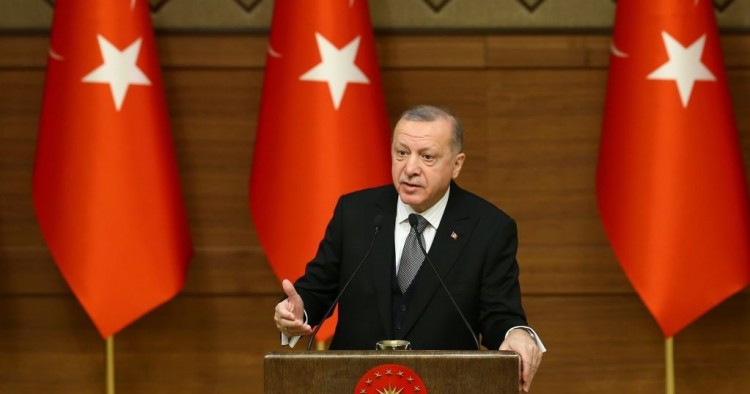 2019 proved to be a difficult year for Turkish President Recep Tayyip Erdogan. At home, he faced several challenges, including a troubled economy, unrest within his own party, and a significant loss at the ballot box. The long-running problems in Turkey-U.S. relations got worse, Turkey-EU tensions heightened, and Ankara found itself isolated in the Middle East. Meanwhile, Turkey cultivated closer ties to Russia, but that partnership was not without its problems either.

Erdogan is hoping for a reversal of fortune in 2020. Presidential and parliamentary elections are scheduled to take place in 2023 but many in Turkey expect snap elections will be called this year. Although Erdogan insists the elections will be held as scheduled, he might be tempted to hold them earlier. Two important figures within the ruling party, former Economy Minister Ali Babacan and former Foreign Minister and Prime Minister Ahmet Davutoglu, are forming their own political parties while Erdogan’s ruling coalition is losing ground. Given the mounting economic problems and the prospect of U.S. sanctions, which could hurt the Turkish economy even further, Erdogan might want to hold elections in 2020 to mitigate the fallout of a worsening economy and deny the new parties enough time to organize.

In the past, Erdogan has used foreign policy, particularly Syria policy, as a tool to divert attention away from his political mistakes and mobilize his nationalist base. He is likely to stick to the playbook in 2020.

On Jan. 2, Turkey’s Parliament approved plans to send troops to Libya, aiming to bolster the UN-backed government in Tripoli that has been under siege from the forces of Gen. Khalifa Hifter in eastern Libya. Erdogan is hoping to kill several birds with the Libya stone. He eyes the country’s energy resources, wants to salvage billions of dollars of business contracts thrown into limbo by the conflict there, and hopes to increase Turkey’s room to maneuver in the eastern Mediterranean, where an anti-Turkey camp including Greece, Cyprus, Egypt, and Israel has formed. But Turkey’s Libya gambit may create further headaches for Erdogan. Russia and Turkey are backing opposing fronts in the Libyan conflict and Moscow warned Ankara against its troop deployment. The two are already having problems in Syria’s Idlib Province, where a regime offensive is threatening Turkish military outposts and another refugee flow toward the Turkish border. A controversial decision by Erdogan might add to all that.

Erdogan has recently revived plans to dig a canal on the edge of Istanbul, possibly undercutting the 1936 Montreux Convention governing the Turkish Straits. In a TV interview he said military ships can use the canal instead of the Bosphorus Strait. The 20th-century agreement limits and regulates deployments in the Black Sea for navies not belonging to Black Sea littoral states, including navies from NATO. The convention has been an issue for the U.S., particularly at times of heightened tension with Russia. Whether the canal will undercut Montreux or not, Erdogan’s recent statements hinting at his desire to do so will surely raise eyebrows in Moscow. 2020 may just be as stormy as 2019 for Erdogan.