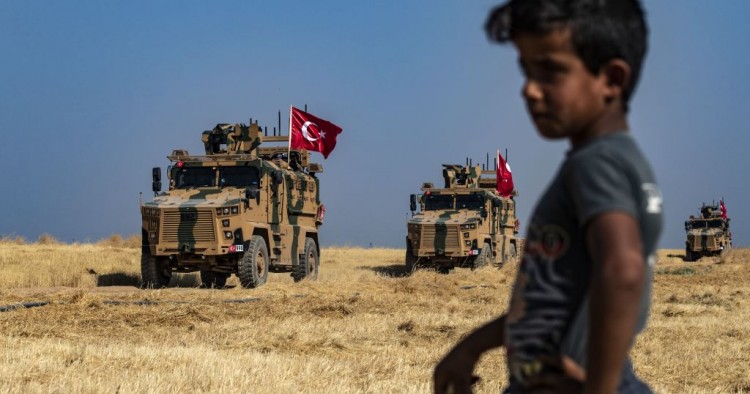 The Trump administration has given the green light to a Turkish military incursion into northeastern Syria against America’s Kurdish allies in the fight against ISIS. After a phone call between President Donald Trump and Turkish President Recep Tayyip Erdogan on Sunday, the White House released a statement saying that “Turkey will soon be moving forward with its long-planned operation into Northern Syria” and that the U.S. military, which has around 1000 troops in Syria, would not “support or be involved in the operation.” Trump’s decision angered many in Washington, who call the decision harmful and a gift to America’s adversaries. Senator Lindsey Graham, who has been a close Trump ally and promoted mending ties with Turkey after Ankara purchased Russia’s S-400 missile defense system, threatened to sanction Turkey if it set foot in Syria.

This is not the first time President Trump has made such a move though. In December 2018, he ordered the withdrawal of all U.S. troops from Syria, only to walk back that decision after widespread condemnation from both Democrats and Republicans. A month later, he threatened to “devastate Turkey economically” if it attacked the Kurds in Syria. Trump’s current announcement might result in a similar zigzag in the coming days, but it might already be too late. Turkish troops are ready to enter Syria any minute. When they do, chaos and conflict are likely to follow in what has been a relatively stable part of the country. If the Turkish incursion extends into Kurdish-majority areas, the People’s Protection Units (YPG), a Syrian Kurdish militia that Turkey considers a terrorist organization, is sure to respond. That could not only lead to mass displacement and chaos but could further derail the fight against ISIS as well.

From Trump’s perspective, his move might sound like a perfect plan. He has shifted the debate away from impeachment. He thinks he can claim a foreign policy victory in 2020 by subcontracting the fight against ISIS to Turkey and bringing the troops home, a long-time campaign promise. But since the conflict in Syria started, Turkey has not only turned a blind eye to jihadi actions within its borders but accelerated the jihadization of the Syrian war. Turkey’s capacity to fight against radical jihadi groups is questionable at best. Ask the Russians. Russian President Vladimir Putin has recently complained about the lack of progress on Turkey’s promises to clear Idlib, a smaller area than the region where Turkey intends to establish a safe zone, of radical groups. In fact, Putin hinted that the jihadi problem in Idlib has gotten worse under Turkey’s watch.

Northeastern Syria presents a much bigger challenge for Turkey. The West is already worried about an ISIS resurgence in Syria. A potential conflict between Turkey and the YPG and Turkey’s lack of ability and willingness to effectively fight against ISIS and hold ISIS detainees in Kurdish-controlled camps will only make things worse. Trump’s decision is not only a blow to U.S. Syria policy but will also result in a further deterioration of U.S.-Turkish relations. A unilateral Turkish military operation will worsen the already toxic mood vis-à-vis Erdogan on the Hill and might prompt a new round of sanctions at a time when Trump was trying to convince the Congress to hold off on punishing Turkey.

Trump might be forced to walk back his decision, again. But it might be too late this time.