Turkey and Russia agree to a cease-fire in Idlib, but will it hold? 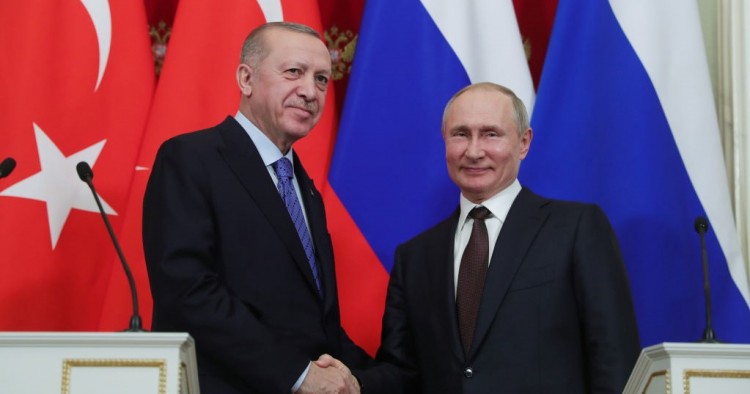 After weeks of clashes that killed scores of Turkish and Syrian soldiers, Turkey and Russia hammered out a deal, bringing a much-needed halt to the fighting in the northwestern Syrian province of Idlib. Prior to last week’s agreement, Turkish forces had been trying to stop a regime offensive on the province, fearing the fighting would unleash another refugee flow to Turkey’s border, adding to the hundreds of thousands of people already amassed there. The fighting in Idlib also risked further deterioration of Turkey’s relations with Russia and a domestic backlash as public anger vis-à-vis Syrian refugees and the Turkish military death toll has risen considerably in the last few weeks. A total of 59 Turkish soldiers have been killed since the beginning of February — 34 in a single attack last week.

The agreement, if it holds, stems the advances of the regime and achieves President Recep Tayyip Erdogan’s aim of preventing another influx of refugees and a military showdown with Russia. But it also represents a concession on Erdogan’s part. Before the recent escalation of tensions with the regime over Idlib ignited calls for regime change among pro-government circles in Ankara, Turkey had resigned itself to the fact that the regime is here to stay. Last week’s deal brought Turkey back to the reality that Ankara had to work with the regime to address its pressing problems in Syria. Previously, Erdogan demanded that regime forces pull back from recently captured territory. But the deal consolidates the regime’s recent military gains by freezing the front lines and creating a buffer zone along the strategic M4 highway, which will be policed by joint Turkish-Russian patrols. The deal also does not address what will happen to the Turkish observation posts originally set up to monitor the 2017 “de-escalation” agreement, most of which have been besieged by regime forces. In an effort not to look weak, President Erdogan announced that the observation posts would remain in place, but opposition figures argue he will be forced to withdraw the troops manning them as remaining inside areas controlled by the regime would not make any sense and would only further expose them to regime attacks.

Despite the concessions Erdogan made in Moscow last week, the deal has been received positively by the main opposition Republican People’s Party (CHP). In a press conference over the weekend, the CHP announced that it welcomed the deal as an important step to save the lives of Turkish troops and end government efforts to topple the regime.

The main question now is whether the cease-fire will hold. In the past, similar cease-fire agreements ended shortly after they were announced and were followed by more fierce fighting that further consolidated the regime’s control. If last week’s agreement meets a similar fate, Turkey is back to square one, only weaker both at home and abroad.