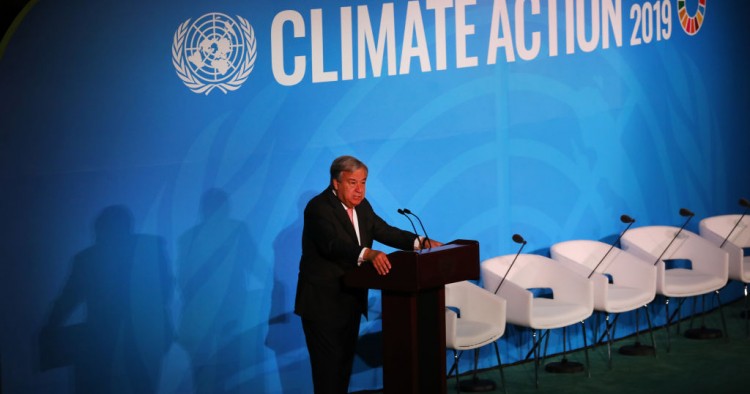 This week heads of state and government are gathered in New York for the UN Summits Week, during which five key summits are taking place to urge action on major challenges that continue to undermine human security globally. In addition to the Climate Action Summit, which has kicked off the Summit Week today, also planned are the High-Level Meeting on Universal Health Coverage, High-Level Dialogue on Financing for Development, High-Level Review of the Small Island Developing States Accelerated Modalities of Action (Samoa Pathway), and, underpinning them all, the Sustainable Development Goals (SDGs) Summit, which will be held tomorrow.

Climate action is a cornerstone of the UN’s agenda this year. The Climate Action Summit is an important precursor to international climate negotiations set under the 2015 Paris Agreement for 2020, when countries are expected to renew and raise their pledges for climate action, including on emissions reduction and on financing for climate-related adaptation in developing countries. Initially set to demonstrate and propel action plans to end increases in global greenhouse gas emissions by 2020, and reach net zero emissions by mid century, as UN Secretary-General António Guterres stated when he announced the summit last year, the tone at the summit will be colored by the fresh findings of a new UN report released yesterday.

Prepared by leading global scientists from the UN World Meteorological Organization (WMO), Sunday’s report shows a “glaring and growing gap” between climate action targets and reality. The report presents details of the current state of our planet’s climate, and trends in emissions of greenhouse gases and their concentrations in the atmosphere. According to the report, drivers and symptoms of planetary warming have accelerated, not abated, and global temperatures have risen to record levels over the last four years. The impacts are life-threatening, leading to greater risks to public health including through intensified heat waves, deeper air pollution, reduced agricultural yields, and food insecurity.

The scientists responsible for the WMO report are urging rapid and robust transformational action to curb global emissions and warming in order to avert the most disastrous consequences of irreversible climate system disturbances. Sunday’s report raises the bar even further after an Intergovernmental Panel on Climate Change report approved in late 2018 stressed the need to aim for capping temperature increases at 1.5 degrees Celsius this century. Efforts to reduce emissions must be quadrupled for this target to be met. Yet the world is presently not on track to even cap the rise in temperature at 2 degrees Celsius. Emissions are not estimated to peak by 2020, let alone 2030. We are completely off track.

Despite the urgent need for much more comprehensive and serious climate action, alarm bells have been falling on deaf ears in some pivotal quarters of the globe.

The government of the U.S., the world’s second-largest coal producer and second-largest emitter of greenhouse gases, supports greater expansion in coal production and in emissions generally. U.S. President Donald Trump has threatened to withdraw the country from the Paris Agreement in which it had pledged to cut emission by 26-28% between 2005 and 2025. The U.S. is presently not on track to meet its climate targets that are critical for the successful implementation of a global mitigation agenda compatible with a rise in temperatures limited to 1.5 degrees Celsius above pre-industrial levels. U.S. President Trump, who was expected to skip today’s climate summit, “dropped by” for ten minutes this morning before departing for another event.

China, on the other hand, the world’s top coal producer and largest annual emitter of greenhouse gases, is on track to meet its commitments and potentially have its emissions peak earlier than planned, before 2030. China is also expected to announce more ambitious emissions targets at today’s summit. Other countries expected to announce robust plans for emissions reductions include Germany and France.

The UN Climate Summit was preceded by the first-ever Youth Climate Summit last Saturday. Last week a global climate strike brought together millions of students to the streets across the world, demanding real climate action from politicians and corporations.

The UN Summit Week presents the world's countries, through their heads of state and government, with an important opportunity to push for the coalescence of much more ambitious commitments and serious demonstrable action, to place the world on the trajectory needed to achieve its vital human security goals, including climate action ones that are central to this global agenda.