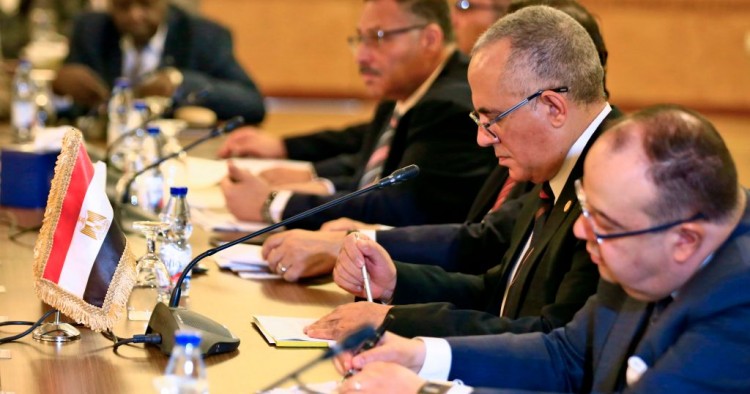 The U.S.-sponsored talks held last week between Egypt, Ethiopia, and Sudan, over the Great Ethiopian Renaissance Dam (GERD) might have come as something of a surprise to those who haven’t been following the situation. There were questions as to why the U.S., along with the World Bank, had suddenly gotten involved in an “inconsequential” regional spat. In fact, the meetings were the latest developments in a regional soap opera that’s been running since 2010, when Ethiopia first announced the construction of the dam. The GERD will be the region’s largest hydroelectric dam and has the capacity to hold the Nile’s entire annual rainfall. The major point of contention had been the rate at which the dam would be filled since during this period there would be a decrease in the amount of water reaching Egypt, which receives a staggering 90 percent of its water from the river. The tripartite negotiations had been going nowhere for almost a decade and had been getting progressively more contentious. Egypt first called for international mediation in December 2017, which Ethiopia has consistently refused. With the dam almost 70 percent complete, the situation was becoming fast untenable and the situation appeared to be spiraling toward a nightmare scenario of conflict. The talks held last week might help avoid that inevitability.

Why the U.S. and the World Bank? The U.S. has significant interests in the region and in both countries, especially Egypt. Approximately $7.5 billion in trade flows between the two countries every year (significantly less in the case of Ethiopia, but rising), Egypt controls 10 percent of the world’s shipping through the Suez Canal, and the U.S. has spent copious amounts on military and economic aid to the country over the past four decades. The World Bank, which has no interest or investment in the GERD, is the perfect international arbiter; not only is it impartial, it has the advantage of having brokered one of the world’s most vital and long-lasting treaties on this subject: the 1960 Indus Waters Treaty, between India and Pakistan. Considered one of the world’s most successful water-sharing treaties, it took a staggering nine years to negotiate and still holds today.

It is profoundly within the U.S.’s interest to be involved in successful negotiations for myriad reasons. The first is the abovementioned economic interests; U.S. businesses will be loath to see their investment crumple in the face of regional unrest. The second is that while they do not share land borders, the two countries have similarities. Egypt and Ethiopia are both huge regional players and their populations are similar, the largest in the Middle East and North Africa and the second largest in Africa respectively. They’re both countries that have porous borders with armed extremist threats on the other side. Armed or proxy conflict would have a massively destabilizing regional effect that will inevitably result in global ripples. If the tragedy of the Syrian war has demonstrated anything, it is that regional conflicts can and do have profound international socioeconomic, political, and demographic effects.

And finally, the U.S. faces competition in the regional influence stakes. Last month Russian President Vladimir Putin signaled that Russia had its cap set on Africa again in a big way. The Africa summit held in Sochi — co-hosted by Putin and Egyptian President Abdel-Fatah el-Sisi, as the current head of the African Union — attracted representatives from every one of the invited 54 states, including a jaw-dropping 43 heads of state. At the summit, Putin offered to mediate the GERD issue with Egypt and Ethiopia (who did meet on the sidelines). Considering Russian — and Chinese — interest in slowly stripping soft power and influence from the U.S., it is not in America’s interests to cede ground.