Why did Russia deploy fighter jets to Libya? 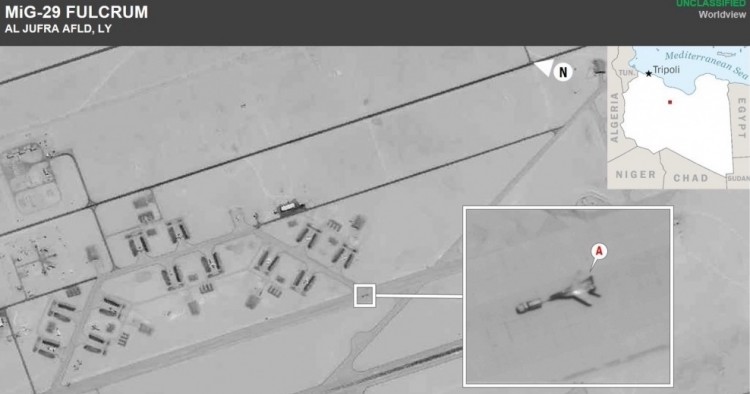 Moscow continues to deny that Russian mercenaries are involved in the Libyan conflict, disputing the presence of “Russian military” in the North African country. Despite a recent accumulation of evidence to the contrary, Moscow continues to use this equivocal language, hoping the media storm will die down. Photos and videos have been shared in recent days showing Russians leaving the Tarhuna region by car or visiting shops near the Bani Walid military base. On top of this, Russia is now facing accusations of contravening the Libyan arms embargo, and on May 26, U.S. African Command (AFRICOM) directly accused Moscow of deploying fighter jets to Libya to support Russian state-sponsored private military contractors (PMCs) operating on the ground.

Whatever the merits of the evidence, Russia is unlikely to acknowledge the accusations. Photos published by AFRICOM have already been criticized by Russian pro-government media and experts, while Telegram channels associated with the media empire of Yevgeny Prigozhin, a Russian businessman and alleged owner of the private military company Wagner Group, have cast further doubt. These actors’ arguments may well find their way into the official Russian discourse: There is no proof, they say, that the alleged Russian fighter jets were actually in Libya, as AFRICOM’s photos were from Syria, where they supposedly took off. The Russians also deny that the aircraft were deployed from Russia via Syria, claiming that Moscow only uses this route for transporting humanitarian aid, not military supplies.

Even so, reports suggesting that there were MiG-29s in Libya, traveling through Russia's Hemeimeem air base in Syria and Iranian air base Hamadan, appeared in mid-May, and one MiG-29 was spotted at Libya’s al-Jufra air base. Satellite images from al-Khadim base in eastern Libya show aircraft with tail features akin to those of the Su-24, even if it is difficult to establish which force they belong to without additional data.

While Moscow is indeed using the backdrop of the pandemic and the resulting economic recession to increase its leverage over and exploit local rivalries, it would be premature to argue it is planning to get involved in Libya to the same extent as it has in Syria. In fact, it is hardly news that Russia is using Hemeimeem air base in Syria as a transport link to Libya. It has been doing so for some time. The base also serves as a hub for flights to Sudan, Central African Republic, and even Venezuela. Moreover, despite links between Russian mercenaries and military officers, this does not mean that Moscow is fully aligned with these private actors. Rather, various Russian companies with commercial interests in Libya offer their support to different (often competing) political factions; the only difference is that some of the companies have closer ties to the Russian military than the others.

Russia would like to make up for the investments it lost as a result of the Gadhafi regime’s downfall in 2011, and the opportunity to establish friendly regimes in both Libya and Syria is quite alluring. To keep this hope alive, Russia has been trying to prop up Khalifa Hifter after a recent series of losses, hence Moscow’s role in recruiting Syrians to fight on Hifter’s side and providing aircraft to his forces. By throwing Hifter a lifeline, Moscow seeks to preserve the current political equilibrium in an effort to maximize its leverage over what comes next post-Hifter. However, as the May 26 AFRICOM statement makes clear, this strategy is fraught with the risk of new sanctions and Russia’s geopolitical maneuvers may not come for free.

Anton Mardasov is a non-resident scholar in MEI's Syria Program. He is also a non-resident military affairs expert at the Russian International Affairs Council focusing on Syria, Iraq, and extremist organizations. The views expressed in this piece are his own.