Without a Houthi commitment, the cease-fire could make Yemen more vulnerable to COVID-19 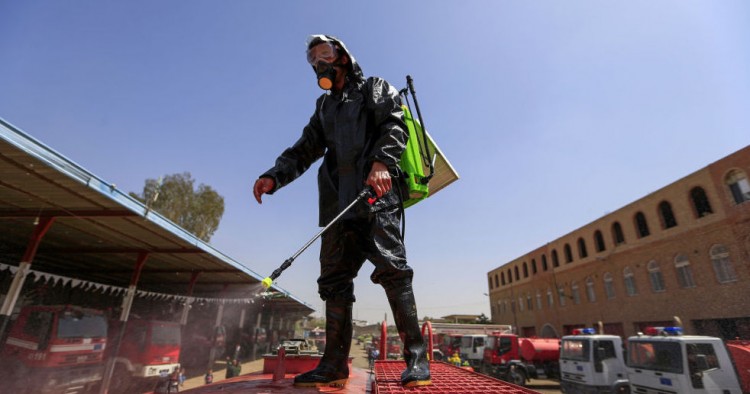 On April 8, 2020, Saudi Arabia declared a unilateral two-week cease-fire initiative. The decision came in response to the UN secretary-general’s call on all parties in Yemen to end hostilities and ramp up efforts to counter a potential COVID-19 outbreak. While a cease-fire is urgently needed now that the country has its first confirmed COVID-19 case, the probability of its success, much less peace, is fairly dim.

The Houthis rejected the cease-fire, describing it as a “political and media maneuver.” The rebel group views the war as one between the Saudi-led coalition and Yemen, positioning themselves as the legitimate representatives for Yemenis and sometimes referring to parts of the country outside their control as “occupied areas.” In a document they sent recently to the UN that outlines their “vision” to end the war, the Houthis presented a wish list including ending the Saudi-led coalition’s military intervention, lifting the blockade on Yemen, and having the coalition foot the bill for the post-war reconstruction and rebuilding of Yemen’s economy. The only real concession they would give in return is to stop attacks on Saudi soil. The signature bar in the document only included the leadership of the coalition and the Republic of Yemen in Sanaa, totally dismissing the Yemeni government and other groups opposed to the Houthis inside Yemen.

For the Houthis, a cease-fire does not apply to their military offensive inside the country. Previous cease-fires have often provided them with the opportunity to regroup and escalate militarily. The Stockholm Agreement allowed the rebel group to redirect its military power and resources and gain ground. Last month, they launched a major military operation taking control of large swaths of territory in al-Jawf and Nehm east of Sanaa city and posing a significant threat to Marib city, the Yemeni government’s last stronghold and the source of all of Yemen’s gas and much of its oil wealth. A pocket of stability, Marib now hosts 1.5 million Yemenis, including 800,000 internally displaced persons.

The immediate Houthi threat to Marib was halted after government forces and local tribes launched a counteroffensive with support from the coalition, but the broader threat still looms large. Since the beginning of the cease-fire, the Houthis have resumed their military offensive in Marib, Bayda, al-Jawf, Hodeida, and Taiz. They also launched three ballistic missiles at Marib city, leading to civilian deaths and injuries. The Houthis’ lack of interest in halting their military operations inside Yemen puts Marib at grave risk, threatens to further destabilize Yemen, and could displace millions of civilians in the midst of a potential COVID-19 outbreak, defeating the very purpose of the cease-fire. While pressure should continue on all sides to stop the fighting, the use of force might be necessary to protect Marib against the Houthis’ incursion and Yemen from the spread of coronavirus.

Nadwa Al-Dawsari is a non-resident scholar at the Middle East Institute.