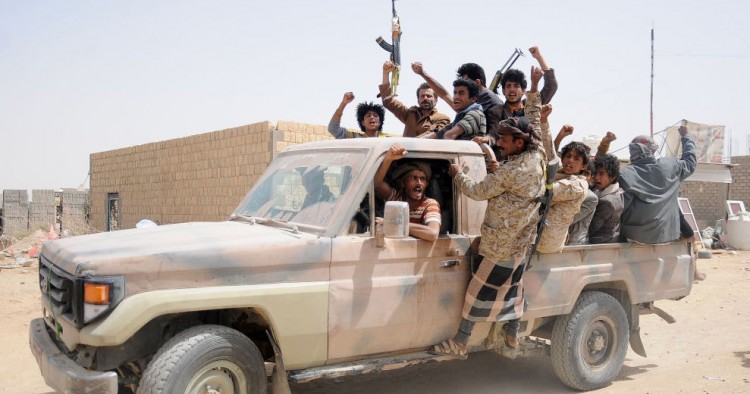 Just a week after Houthi rebels took control of al-Hazm, the capital of al-Jawf Province, on March 1, UN Special Envoy for Yemen Martin Griffiths paid an unprecedented, one-day visit to the Houthis’ likely next target, oil-and-gas-rich Marib, reiterating the urgent need for de-escalation. “Fighting needs to stop now,” Griffiths said in a joint press conference with Marib Governor Sheikh Sultan al-Aradah. “We will either silence the guns and resume the political process, or we will slip back into large-scale conflict.”

While the UN envoy’s intervention was aimed at putting out the immediate fire rather than resolving the underlying conflict, al-Aradah made clear that the Yemeni government “supported real peace.” “It neither honors us nor the UN envoy to sponsor a false peace,” al-Aradah added, in reference to the December 2018 Stockholm Agreement, which maintained Houthi control over Hodeida and prevented the Yemeni government from expanding its jurisdiction, contrary to the provisions of UN Security Council (UNSC) Resolution 2216.

While Griffiths visited Hodeida in November 2018 as fighting was still ongoing, with coalition-backed forces battling the Houthis in an attempt to capture the city’s ports, his trip to Marib came after the flare-up of violence had ended. This is likely a sign that the UN intends to recognize the Houthis’ recent territorial gains, for two reasons.

First, the UN envoy now understands that the local balance of power in 2018-19 and the Stockholm Agreement were insufficient to bring about successful, comprehensive peace talks. Only a significant change in territorial control, coupled with a shift in local alliances, can lay the groundwork for serious negotiations. The Houthi military takeovers of Nihm, al-Ghail, and al-Hazm, alongside the Southern Transitional Council’s control of the port city of Aden and the clear divisions within the coalition-backed forces, have changed the equation, however. The Yemeni government’s current weakness means it could be pressured to make concessions, an outcome favoured by some in advocacy and humanitarian circles in Brussels, London, and New York. In fact, many of them have privately deemed UNSC Resolution 2216 to be an impediment to efforts to resolve the conflict, thus requiring a change on the ground in the absence of a new UNSC resolution. For now, it appears that the international community is not concerned about who will assume power in post-war Yemen.

Second, an overemphasis on ending the war at all costs could lead to concluding a fragile agreement that only results in another cycle of violence. The ambiguous Stockholm Agreement and the subsequent desperate attempts to show progress in Hodeida, however tenuous, and save the deal from collapsing reflect a flawed approach. Griffiths has recently sought to revive the peace process regardless of the status of the Stockholm Agreement. In a January 2020 UNSC briefing, he told the council he was “closer to formally launching political consultations” between the government and the Houthis to end the war this year. However, as the recent escalation makes clear, the Houthis exploited “the relative calm” in 2019 to reorganize their forces and launch an attack on Jawf. That’s why peace efforts in Yemen must go hand in hand with military operations.

The Houthis viewed Griffiths’ visit to Marib as unnecessary, and chief Houthi negotiator Mohammed Abdul Salam accused the envoy of prolonging the war through a geographically divided approach to peacemaking, including the attempted cease-fire in Marib. The Hodeida cease-fire reduced the pressure on the Houthis from air strikes, giving them time to regroup, strategize, and plan new military operations. They saw a strategic opportunity in the discord among anti-Houthi groups to extend their territorial control over resource-rich governorates, most notably Marib and Shabwa, to ultimately “have the upper hand in any [peace] deal,” according to Fatima Abo Alasrar. At the same time, they are also seeking to push their military operations north in Jawf, threatening Saudi Arabia’s southern border and enhancing their leverage vis-à-vis the kingdom in backchannel talks. The ongoing fighting in Jawf and recent statements from the Houthis provide evidence of their next steps. They have tested the will of the international community and know well what they are doing.

The UN must prevent the fall of Marib

In an effort to normalize the status quo in Hodeida, the UN emphasized the potential humanitarian costs to conclude the Stockholm Agreement, an approach that should be used in Marib to protect more than a million internally displaced persons (IDPs). While the UN has acknowledged Marib’s large IDP population, it has yet to explain how the international community will protect them. Marib has the largest population of IDPs in the country; in addition to the 770,028 displaced persons recorded in March 2019, there are thousands of newly displaced families and unregistered IDPs. During his one-day visit to Marib, Griffiths understood the stakes at hand, visiting al-Jafina IDP camp, the largest such camp, which hosts more than 6,000 displaced families.

Most importantly, Griffiths’ call for de-escalation shouldn’t in any way, shape, or form allow the Houthis to seize the moment once again to expand their territorial control. The local balance of power around Marib is enough of a cause for concern already, with the Houthis now surrounding the city from the north via al-Hazm (134 km away) and the east via Sirwah (about 40 km away). There is a high likelihood that they will launch a multi-sided attack on Marib in an effort to capture the oil fields of Safer, nearly 70 km east of the city. A Houthi attack would have major consequences — not only in terms of the distribution of power, given that the province is “the Yemeni government’s last stronghold,” according to Nadwa Al-Dawsari — but most importantly, for the IDPs. An attack on Marib would result in massive displacement, compounding the already serious humanitarian crisis. The conflict itself may become blurrier should the government lose control of Marib, considering the popular ideological rejection of the Iranian-backed Houthi project in Yemen.

Caught in the middle

In the face of the UN’s efforts to normalize the situation and the Houthis’ expansionist aims, the Yemeni government finds itself in a precarious situation and has very limited options: either remain on the defensive against Houthi attacks or secure Marib by launching a counteroffensive to regain control of lost territories or breaking the concentration of Houthi forces by opening new frontlines.

The recent Houthi escalation seems to have given the government, in coordination with Brig. Gen. Tareq Saleh, who leads a force on the west coast, credible cause to formally announce the collapse of the Stockholm Agreement, thus reactivating the Hodeida front and putting the Houthis on the defensive. The government has a responsibility to protect the IDPs in Marib and halt the deterioration of the humanitarian situation, and this will require it to take difficult pragmatic choices proportional to the challenges of the day. It must resolve the tensions within its own camp in a timely manner, improve relations with its counterparts, and remove officials with suspicious Houthi ties.

What can be done to prevent another IDP crisis?

Several things can be done to reduce the risk of a new IDP crisis. First, UN agencies, such as the World Food Program and UNICEF, and the coalition of NGOs that lobbied to halt the offensive on Hodeida can urgently increase international pressure on the Houthis to end their campaign against Marib. The international community must shift its focus from the coalition and the Yemeni government to the activities of armed non-state actors that profoundly imperil the peace process as well as hundreds of thousands of civilian lives. The IDPs in Marib cannot wait.

Second, the United States, aware of the alarming local imbalance of power and its implications for the UN-led peace process, can support the Yemeni government’s counter-offensive to secure Marib by coordinating the use of airpower with its Gulf partners. This would cut Houthi supply lines from Sanaa, limit their military reinforcements, and provide cover for ground operations. Securing Marib is the only way to protect the IDPs, and the way to secure Marib is to push the Iranian-backed Houthis back from the area, either through peaceful or military means.

Third, the U.S. State Department, the European Union, and the United Kingdom can categorically condemn Houthi escalation and demand the group withdraw from recently captured territories. In light of Marib’s large IDP population and the Houthis’ exploitation of the recent de-escalation, the focus should be on averting a further displacement crisis by preventing the collapse of the government using all available means. The present balance of power in favor of rebel groups is unlikely to give Yemenis the kind of peace they deserve, especially when the status quo translates into bargaining chips in any forthcoming peace talks. While the firefights continue in Jawf, Dale, and Sirwah at the time of writing, calls to “silence the guns” under the current conditions will only put the IDPs in Marib at serious risk.