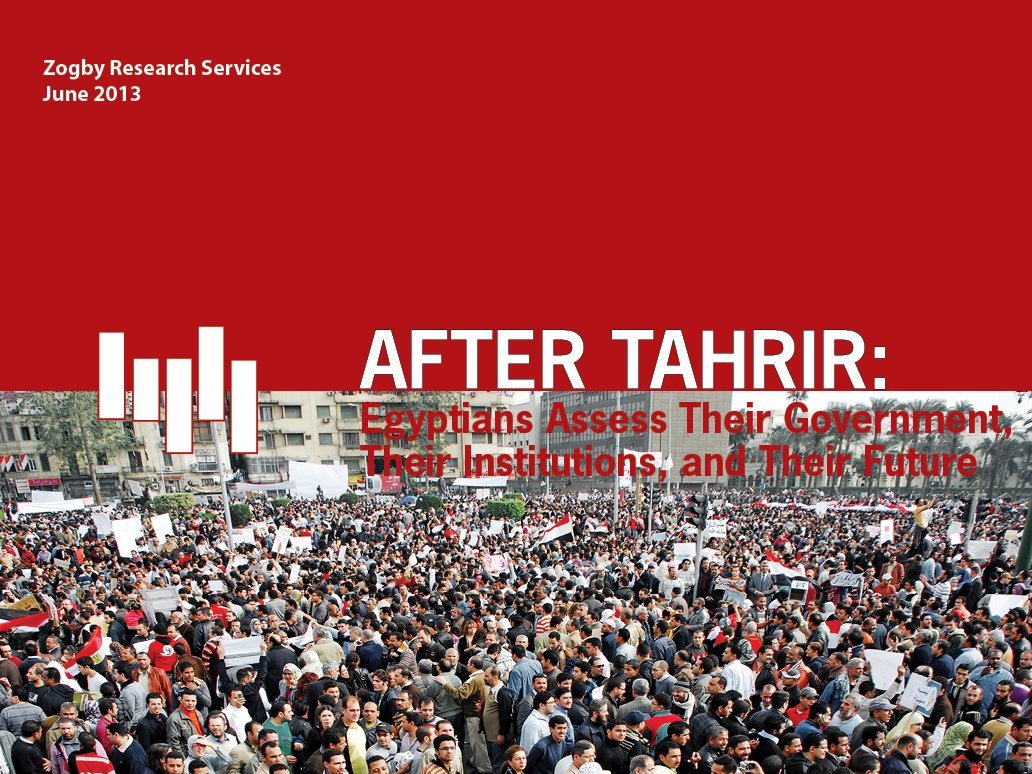 On June 17, 2013, the Middle East Institute hosted an event titled “After Tahrir: Egyptians Assess Their Government, Their Institutions, and Their Future.” The event featured Dr. James Zogby, president of the Arab American Institute and founder of Zogby Research Services (ZRS), MEI Scholar Amb. Edward Walker, Brian Katulis of the Center for American Progress, and Egyptian-American attorney Dina Guirguis. MEI senior vice president Kate Seelye moderated the event. The panelists discussed the findings of the extensive ZRS-conducted public opinion poll on Egyptian attitudes toward the Muslim Brotherhood, as well as the implication of these results for the future of Egypt’s political processes.

Zogby opened the panel by presenting the results from his polling in Egypt. Below is a summary of the poll’s key findings:

Zogby noted that, although there were regional differences, there were no strong demographic differences – in other words, across the board, Islamists shared the same views, regardless of region, just as liberals throughout the country largely held the same views. He concluded that, although the NSF and the April 6th movement had almost identical views on every issue, the two parties have not been able to reach out to each other and organize, and speculated that this is because there is no confidence in the leadership of either party.

Dina Guirguis noted that last year’s election was primarily decided by the “young revolutionary contingency” and that Morsi was elected as the “protest vote,” mainly because he was less objectionable than the other candidate (Ahmad Shafik) and because the Muslim Brotherhood was the only well-organized opposition group at the time. The Muslim Brotherhood effectively exploited the public’s disenchantment with the Mubarak regime. However, since being elected, “Morsi has taken so many steps to alienate precisely that group of people, the young revolutionaries...that brought him into power,”Guirguis explained. She also suggested that the new Tamarod opposition movement could be significant because “it is a movement that is quite authentically grassroots so far. There have been no new egos coming out to claim leadership of the movement.”

Amb.Walker began his presentation by warning against placing too much emphasis on the silent majority, and drew a distinction between the number of people who actively support an alternative political party, and the number of people who simply don’t care and won't go out to vote. Walker also echoed Zogby's point that the divides are ideological and that “ideology often trumps rationality.” He stated that part of the reason the opposition groups are struggling to gain support is because they lack a coherent vision that people can conceptualize. Walker closed by pointing out the need to recognize which actors have funding and where those funds come from.

Brian Katulis addressed the advantages and disadvantages of the new open political field in Egypt. He argued that, while there is opportunity in Egypt, there is a danger that there may be “another round of elite jockeying for power,” and that the Tamarod protests could lead to more violence and the greater detachment of average Egyptians from the political process. Katulis countered the earlier argument that the divide in Egyptian society was largely ideological, saying that he doesn't think there is much substance behind the ideology. He suggested that even if the US could invest in these opposition groups, it may not be worth it to do so because they lack concrete plans for tackling important topics like the economic crisis and regional security issues. Katulis asserted that the opposition groups need to go beyond disagreeing with the ruling party and present viable alternatives and ideas. Asked if Tamarod is what Egypt needs, he said that it is still too early to tell what Tamarod will become, but he thinks the movement lacks a tangible, enforceable plan. He predicted that Tamarod will effectively decrease the legitimacy of the current government by “channeling the dissent,” but beyond that he doesn't believe the movement has a clear enough vision to have a more substantial impact.

Guirguis then spoke in defense of the organized opposition. She admitted that they are extremely flawed, but also pointed out that there are not really any open channels available to the current opposition. The legislature is dominated by the Islamist contingency and many of the recent laws that have been proposed are extremely biased in favor of the Islamist groups.

Zogby expressed skepticism toward Tamarod, despite its feat of collecting 22 million signatures on petitions in recent months. He argued that while the petitions are a step in the right direction they aren’t enough because “elections aren't won by movements, they're won by persons.” He explained that the Islamic parties provided a compelling vision of going back to a more conservative time “when men were men, women were women and all was pure,” but no one has come forward with a powerful vision of how to move Egypt forward. He also mentioned another poll that found that 28% of respondents said they believed nothing would change in Egypt. “That's the group I worry about the most,” Zogby said. “If that number grows, then you have a situation where the small very committed organized disciplined Islamic party takes control and they end up with a passive acceptance of it by the rest who say nothing is going to change because the opposition has nothing to offer.”

Looking to the broader Middle East, Zogby wondered about the prospects for change in the region if Egypt is held up as a model, but is so far struggling with democracy.  “The region needs a vision, not just Egypt,”he said. Zogby went on to say that, unlike every other Arab country, Egypt ranked their priorities the same before and after the 2011 uprisings. The revolution was and still is about structural and need-based issues like jobs and healthcare, while political issues continue to be less important. Zogby believes that the crisis in Egypt is “not about democracy, it's about people's needs.” Guirguis countered by saying that without confidence in the leadership, economic reform cannot take place. Therefore, the big problem in Egypt is ultimately democracy and governance. Walker added that Western countries were partially to blame for governance issues in Egypt: “When it comes right down to it, democracy does not have resonance with the Egyptian people. I don't think we've done a good job of explaining what it is that we mean when we talk about democracy.”

Zogby closed the panel by noting that before resorting to military intervention, a majority of Egyptians expressed their preference for a national dialogue, which he believes is a hopeful sign for Egypt’s future.

Dr. James J. Zogby is the founder and president of the Arab American Institute (AAI), a Washington, D.C.-based organization which serves as the political and policy research arm of the Arab American community. He is also managing director of Zogby Research Services, which specializes in groundbreaking public opinion polling across the Arab world. Zogby is a lecturer and scholar in Middle Eastern affairs and a visiting professor of Social Research and Public Polling at New York University in Abu Dhabi. A lecturer and scholar on Middle East issues, U.S.-Arab relations, and the history of the Arab American community, Dr. Zogby appears frequently on television and radio. Zogby is the author of Arab Voices (Palgrave Macmillan, October 2010), among other books and publications.  Dr. Zogby has testified before U.S. House and Senate committees and has addressed the United Nations and other international forums. He is a member of the Council on Foreign Relations.

Steven Clemons is Washington editor at large for The Atlantic and editor of Atlantic Live.  He is also the founder of the American Strategy Program at the New America Foundation. He is currently a senior fellow at New America, where previously he served as executive vice president, and remains actively involved in the direction of the American Strategy Program. Publisher of the popular political blog The Washington Note, Mr. Clemons is a long-term policy practitioner and entrepreneur in Washington, D.C. He has served as executive vice president of the Economic Strategy Institute, senior policy advisor on Economic and International Affairs to Senator Jeff Bingaman (D-NM), and was the first executive director of the Nixon Center.

Amb. Edward Walker is a professor of Global Politics at Hamilton College. He previously served as president of Middle East Institute. He was also assistant secretary of State for Near Eastern Affairs, U.S. ambassador to Israel, Egypt, and the United Arab Emirates, and deputy permanent representative to the United Nations. Walker served as the deputy chief of mission in Saudi Arabia and in political, economic and training functions in Lebanon, Syria, and Tunisia. He developed the Economic Reform program for Egypt with the vice president's office while serving as U.S. ambassador to Egypt.

Kate Seelye is senior vice president of the Middle East Institute, where she oversees MEI's programs and communications.  Prior to joining MEI, Seelye worked as a radio and television journalist covering the Arab world from 2000-2009 from her base in Beirut, Lebanon. She reported on the region for NPR, BBC's The World, PBS' Frontline/World and the renowned Channel Four British investigative news series, Unreported World. Prior to that she worked as a producer for the Newshour with Jim Lehrer on PBS.