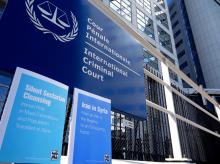 The Middle East Institute hosted Fouad Hamdan, director of the public information campaign Naame Shaam (Letter from Syria) and of the Hague-based Rule of Law Foundation, for the U.S. release of the report Financing Terror. The report aims to quantify the support provided by Iran to Hezbollah in Lebanon, the Assad regime in Syria, Shi'a militias in Iraq, the Houthi rebels in Yemen, and HAMAS and Islamic Jihad in the Gaza strip.

Prepared for the Rule of Law Foundation by a European economic research institute, the report draws on published figures and statements from a wide variety of sources to estimate the costs of what Iran provides in armaments, equipment, training and other military aid to Arab armies and insurgencies. The report also reviews the economic sanctions against Iran, addresses potential financial impacts of sanctions relief, and touches on the economics of Iran's nuclear program.

Fouad Hamdan is the founder and executive director of the Rule of Law Foundation in The Hague, Netherlands. The foundation is home to the Naame Shaam campaign, a project dedicated to researching Iran's role in the Syrian conflict. He previously served  as a political advisor in Libya, Tunisia, and with the Syrian opposition and worked with Arab political parties and civil society groups on campaign and communication strategies. Fouad was the founding executive director of the Arab Human Rights Fund in Beirut in 2008, an organization that gives grants to regional activists. He has also had an extensive career in environmental activism; he founded Greenpeace in Lebanon in 1994 and was the director of Friends of the Earth Europe in Brussels. He holds a masters degree in political science from Hamburg University.
Kate Seelye is senior vice president of the Middle East Institute (MEI), where she oversees communications, outreach, and programs, including the institution’s growing arts and culture program. She also serves on the board of the Ali Vural Ak Center for Global Islamic Studies at George Mason University. Prior to joining MEI in 2009, Seelye worked as a radio and television journalist covering the Arab world from 2000-2009 from her base in Beirut, Lebanon. She reported on the region for National Public Radio, the PRI/BBC show, “The World,” PBS TV’s “Frontline/World” documentary program, and the renowned Channel Four British investigative television news series, “Unreported World.” Prior to that she was a producer for the PBS “Newshour” based in Los Angeles, CA, and also worked at the award-winning business program, Marketplace Radio.