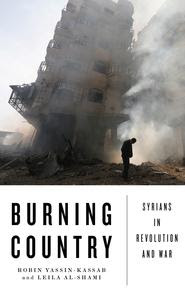 The Middle East Institute (MEI) is pleased to host novelist Robin Yassin-Kassab and human rights activist Leila Al-Shami for a discussion about their recent book, Burning Country: Syrians in Revolution and War, which tells the stories of Syrian civilians organizing, resisting, and surviving inside Syria since the 2011 uprising.
Burning Country explores the reality of life in present-day Syria, examining new grassroots revolutionary organizations, the rise of ISIS and Islamism, and the emergence of the worst refugee crisis since World War II. In this vivid account of a modern-day political and humanitarian nightmare, Yassin-Kassab and Al-Shami give voice to a Syrian people who continue to struggle for justice.

MEI scholar Charles Lister will moderate the discussion. Copies of the book will be available for purchase and signing.
About the Authors:
Robin Yassin-Kassab
Author, Burning Country: Syrians in Revolution and War
Robin Yassin-Kassab is a media commentator on Syria and the author of the acclaimed novel, The Road from Damascus (Penguin, 2010). His journalism and book reviews have appeared in The National, Foreign Policy, and The Daily Beast, among others. In addition, he is also the editor of PULSE, a collaborative political weblog featuring work by a variety of writers, activists and academics based in five continents. He also maintains a blog, where he writes about the situation in Syria, and the ongoing revolutions in the Middle East.
Leila Al-Shami
Author, Burning Country: Syrians in Revolution and War
Leila Al-Shami works with human rights movements in Syria and elsewhere in the Middle East. She was a founding member of Tahrir-ICN, a network connecting anti-authoritarian struggles in the Middle East, North Africa, and Europe. A prolific writer, Al-Shami has written on the impact of leftist movements in the Syrian Revolution, and currently maintains a blog on the ongoing developments in Syria.
Charles Lister (Moderator)
Fellow, Middle East Institute
Charles Lister is a resident fellow at the Middle East Institute. He was formerly a visiting fellow at the Brookings Center in Qatar and before that, the head of the Middle East and North Africa division at the London-based IHS Jane’s Terrorism and Insurgency Centre. Lister focuses on terrorism, insurgency, and sub-state security threats across the Middle East. He is also a senior consultant to The Shaikh Group’s Track II Syria Initiative, within which he has helped coordinate a two-year process of engagement with the leaderships of over 100 Syrian armed opposition groups.  He is the author of The Islamic State: A Brief Introduction (Brookings Institution Press, 2015) and the recently released book, The Syrian Jihad: Al-Qaeda, the Islamic State and the Evolution of an Insurgency (Oxford University Press, 2016).
Praise for the Book:
"Burning Country is poised to become the definitive book not only on the continuing Syrian conflict but on the country and its society as a whole. Very few books have been written on 'the kingdom of silence' that effectively capture how we all got here while not omitting the human voice, the country's heroes and heroines - a combination that is rare but essential for understanding the conflict and its complexities. Robin Yassin-Kassab and Leila Al-Shami have written a must-read book even as the conflict still rages to understand what happened, why it happened, and how it should end."
- Hassan Hassan, co-author of ISIS: Inside the Army of Terror