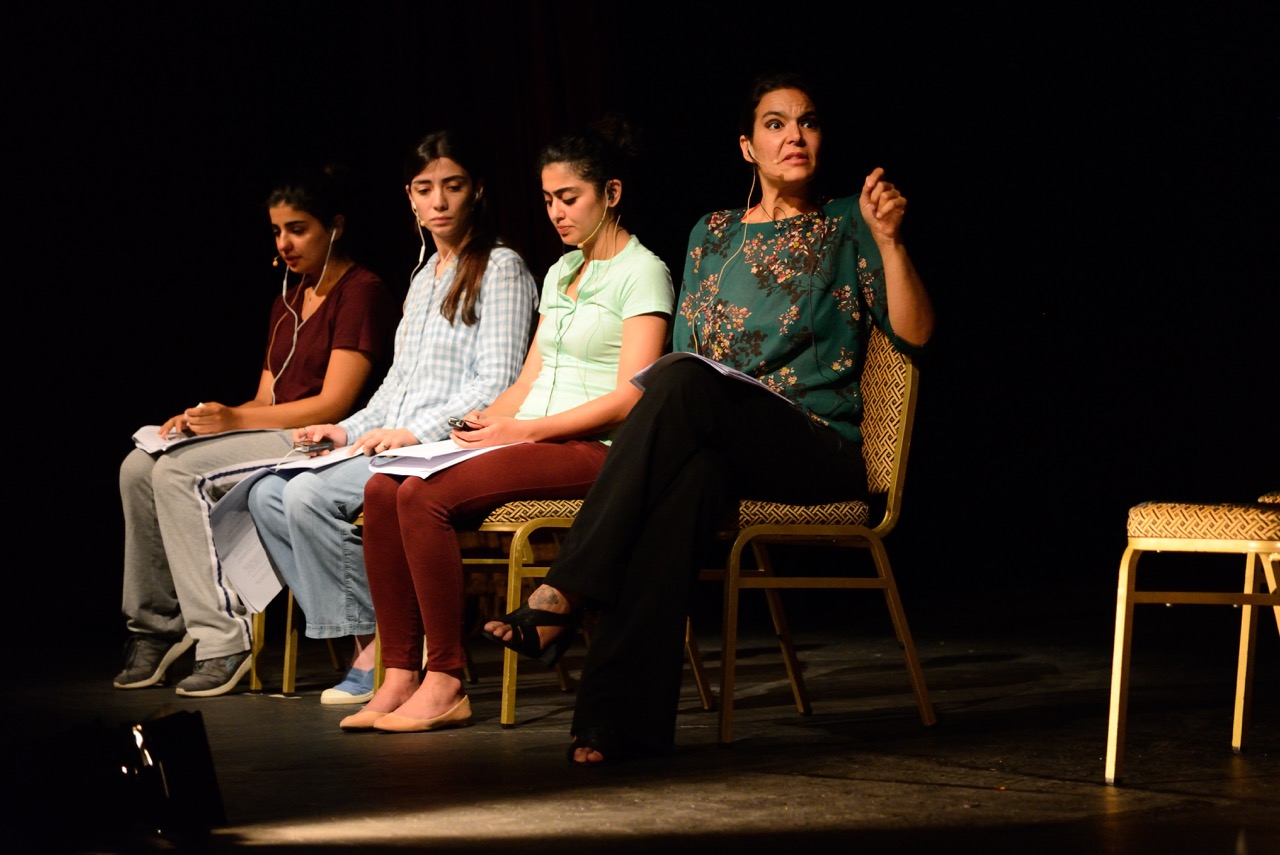 In March 2016, a police raid in Beirut rescued seventy-five Syrian refugee women from what became known as the largest sex trafficking network in the history of Lebanon. The story gained huge media attention as the women told horrifying stories about their abuse, but soon faded from headlines.

In response, American University of Beirut theater professor Sahar Assaf produced “No Demand No Supply: A Re-reading of Lebanon’s 2016 Sex Trafficking Scandal," a performance aimed at giving voice to the stories of the trafficked women. After several successful performances in Beirut and Athens, the play was invited to perform at the Between the Seas festival in New York on May 19, 2019. The play will also feature at the Shubbak festival in London in July 2019.

MEI's arts and culture program is delighted to host Sahar Assaf in conversation with Lyne Sneige, director of MEI's Arts and Culture program, about the development and impact of her play, as well as the growing role of theater in Lebanon and the region in addressing important socio-political issues.

Sahar Assaf
Actress; assistant professor of theatre, American University of Beirut
Sahar Assaf is an actress and stage director and an assistant professor of theatre at the American University of Beirut. She recently co-established the AUB Theatre Initiative with playwright and English professor Robert Myers under which she translated and directed Garcia-Lorca’s Blood Wedding as a site-specific promenade performance and co-translated, co-directed and starred in Shakespeare’s King Lear at Al Madina Theater in Beirut, the first production of Shakespeare in Lebanese Arabic colloquial. She also recently conceived and directed Meen El Felten, a documentary play on rape and sexual assault in Lebanon as part of Abaad MENA campaign of 2018 and No Demand No Supply, a documentary play about sex trafficking in Lebanon in collaboration with Kafa NGO. Her credits as a director include Ab: Beit Byout (an adaptation of Tracy Letts’ August Osage County), Saadallah Wannous’ The Rape and Rituals of Signs and Transformations, Issam Mahfouz’s The Dictator, Watch Your Step, a site-specific performance about the Lebanese civil war and Ana Amel Ana Amela, a devised documentary theatre about the experience of janitors at AUB. Assaf is a member of Lincoln Center Director’s Lab in NYC (2014), a member of Director's Lab North in Toronto (2017), co-founder and artistic director of Directors Lab Mediterranean (2019) and a Fulbright alumnus with an MA in Theatre Studies from Central Washington University (2011).

Lyne Sneige
Director, Arts and Culture program, MEI
Lyne Sneige is currently the director of the Arts & Culture Program at MEI in Washington, D.C. She has over 15 years of experience in international development in the Middle East. Before joining MEI, Sneige was deputy director Lebanon and regional projects manager for Arts and Culture for the Middle East at the British Council operating out of Beirut. She has extensive experience in strategy and planning as well as project management, and has many years of experience in the arts and culture scene in Lebanon and throughout the Middle East. Sneige is a strong advocate of the important role that artists play in their societies. Sneige is a Salzburg Global Seminar fellow, a nominator to the Art Jameel Prize, an international award for contemporary art and design inspired by Islamic tradition organized in collaboration with the Victoria and Albert Museum in London, a nominator to the newly established Agha Khan Music Awards and an advisor to the educational and outreach program of the Beirut Museum of Art (BeMA) that is set to open in 2023. She sits on the selection committee of the Beirut Art Fair and is a board member of Action for Hope, a Beirut based NGO that provides cultural relief and cultural development programs to meet the social, cultural and psychological needs of distressed and displaced communities.