Cultural Production in the Middle East 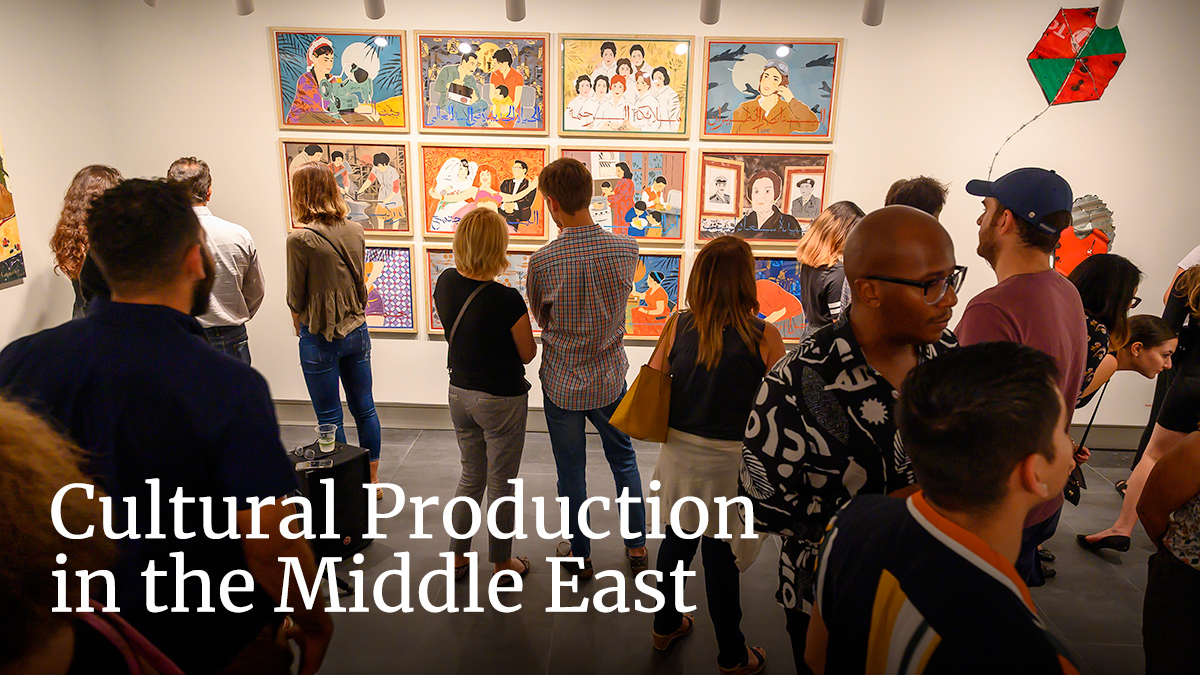 The shifting political realities on the ground in the Middle East and the emergence of new power centers in the arts have shaped where and how culture is being produced, as well as influenced new priorities in cultural production.

Please join MEI’s Arts and Culture Center for a discussion about how these new dynamics are influencing the role of cultural institutions in supporting the work of artists, musicians, filmmakers and others; the opportunities and challenges artists face; and the trends and priorities shaped by a new generation of cultural producers.

The panel is part of the ongoing programming of MEI's inaugural exhibit, Arabicity|Ourouba, which features work by panelist Khaled Barakeh and 16 other contemporary Arab artists.

﻿The event is free and open to the public, but RSVP is required.

Speaker biographies:
Manal Ataya
Director general, Sharjah Museums Authority
Manal Ataya is a museology professional with 15 years of managerial experience in museum development and cultural diplomacy. As Director General of the Sharjah Museums Authority for over a decade, she is tasked with the overall management of 16 museums in Sharjah, United Arab Emirates. Ataya provides strategic forward planning, advising in international museum best practice & policy and executive operational running of several departments. She is passionate about her advocacy initiatives for accessible arts education and programs that promote cross-cultural dialogue. She is responsible for the implementation of His Highness Sheikh Dr Sultan Bin Mohammed Al Qasimi’s directives for future museum and cultural heritage related projects. Ataya is a graduate of both Hamilton College (2001) and Harvard University (2004). She serves on numerous advisory boards including Global Cultural Districts Network; the University of Sharjah’s College of Arts, Humanities and Social Sciences; and ICCROM-Sharjah, the Arab region’s field office of the UN’s body for cultural heritage preservation. Ataya was awarded the Chevalier Ordre des Arts et des Lettres by the French Republic in 2018 for her significant contributions to culture.

Khaled Barakeh
Berlin-based Syrian conceptual artist, curator, and cultural activist
Khaled Barakeh is a Berlin-based Syrian artist and cultural activist whose work often revolves around power structures in context of identity, culture and history. He graduated from the Faculty of Fine Arts in Damascus, Funen Art Academy in Odense and the Städelschule Art Academy in Frankfurt a.M. He has exhibited at Künstlerhaus Stuttgart, The Shanghai Biennale, The Frankfurter Kunstverein, Artspace New Zealand, The Busan Biennale, MKG Hamburg and many other venues around the world. The geographical shift in Barakeh’s life – moving from Syria to Europe – resulted in major changes in his practice; originally trained as a painter, he then developed a stronger focus on contemporary art practices, working with a variety of media and topics. Barakeh is considered a part of a global artivism movement; he approaches creative practices as a tool of social changes – with a strong focus on topics of cultural preservation, he aims to see between the cracks of social and political systems. As a continuation of these creative philosophies outside of the context of his artistic practice, he pursues what he calls a Practice of Necessity - a practice which reacts in response to the pressures, needs, and urgencies of our ever-changing modernity, one that inserts itself directly into political infrastructures. As part of this Practice, he has founded a non-profit organisation called coculture e.V. through which he manages several initiatives, such as SYRIA Cultural Index and the Syrian Biennale, focused on addressing different facets of the challenges faced by displaced cultural producers in the Middle East, Europe and beyond.

Laila Hourani
﻿Program officer MENA, Ford Foundation, Cairo
Laila Hourani works from the foundation’s Cairo office. Her grant making has focused on developing and sustaining facilities-based arts organizations that are exemplars of artistic practice and innovative, equitable space development. She has also sought to advance social justice through media and the work of emerging and established filmmakers. Before assuming the role of program officer in 2013, Laila worked with the foundation as a consultant. Previously, she led the development of strategy for the British Council’s arts and culture work in the Near East and North Africa, enabling cultural exchange between Arab and UK artists in a challenging social and political climate. Over her nearly 14 years with the British Council, Laila initiated, designed, and delivered projects in theater, contemporary dance, music, new writing, literature and translation, creative economy, and cultural leadership. From 2005 to 2011, Laila sat on the artistic board of Cultural Mawred (Al Mawred Al Thaqafy), one of the leading nongovernmental cultural organizations servicing the Arab region. She has also been a board and jury member for other key regional organizations, among them Ettijahat Independent Culture, the Anna Lindh Foundation’s Citizens for Dialogue Programme, and the Arab Fund for Arts and Culture. Earlier, she worked as a journalist and with UNICEF Syria. As author of the acclaimed novel Baoh, published in 2009, she is a creative Arab artist in her own right. Laila holds a diploma degree in TV journalism from Moscow State University.

Lila Nazemian
Independent curator
Lila Nazemian is an independent curator. Her forthcoming curatorial project will take place at New York's Center for Book Arts in January 2020. Other recent projects include: the "On Echoes of Invisible Hearts" series featuring contemporary artists from Yemen, the first took place in 2018 at Berlin’s Poetry Project and the second opened at Station Beirut in April 2019; "Spheres of Influence," the first show of Arab contemporary art in Iran at Tehran’s Mohsen Gallery in 2016. In 2017, she was the U.S. Projects Director at CULTURUNNERS, where, on behalf of the King Abdulaziz Center for World Culture (Ithra), she managed a Saudi artist residency in New York and supported various American Museums produce their exhibitions of Saudi art. Prior to this, she was the Curatorial Associate at Leila Heller Gallery, New York for over four years where she helped organize more than 15 exhibitions.  She received a B.A. in History from Scripps College, and an M.A. in Near Eastern Studies from N.Y.U. She is currently a QAYYEM 2019 Curatorial Fellow. She was among the inaugural participants of the 2018-2019 Interdisciplinary Art and Theory Program in New York and participated in ICI’s 2018 Curatorial Intensive in Bangkok.

Sultan Al Qassemi (moderator)
Emirati columnist and researcher, adjunct Georgetown professor
Sultan Sooud Al Qassemi is an Emirati columnist and researcher on social, political and cultural affairs in the Arab Gulf States. He is currently conducting research for a book that documents the modern architecture of the city of Sharjah in the United Arab Emirates, and is Adjunct Instructor at the Center for Contemporary Arab Studies at Georgetown University. His articles as a columnist have appeared in The Financial Times, The Independent, The Guardian, The Huffington Post, The New York Times Room for Debate, Foreign Policy, Open Democracy, and The Globe and Mail, as well as other notable publications. Al Qassemi is also a prominent commentator on Arab affairs on Twitter. Rising in prominence during the Arab Spring, his tweets became a major news source, rivalling the major news networks at the time, until TIME magazine listed him in the “140 Best Twitter Feeds of 2011.” Al Qassemi is an MIT Media Labs director’s fellow, and in 2014, Arabian Business placed Al Qassemi in its list of World’s 100 Most Powerful Arabs under the Thinkers category. He continues both to write and tweet about the Arab world both from his home in Sharjah, as well as while giving lectures internationally. In addition, Al Qassemi is the founder of the Barjeel Art Foundation, an independent initiative established to contribute to the intellectual development of the art scene in the Arab region by building a prominent and publicly accessible art collection in the United Arab Emirates. Barjeel Art Foundation currently has exhibitions at the Aga Khan Museum in Toronto, and the Whitechapel Gallery in London.