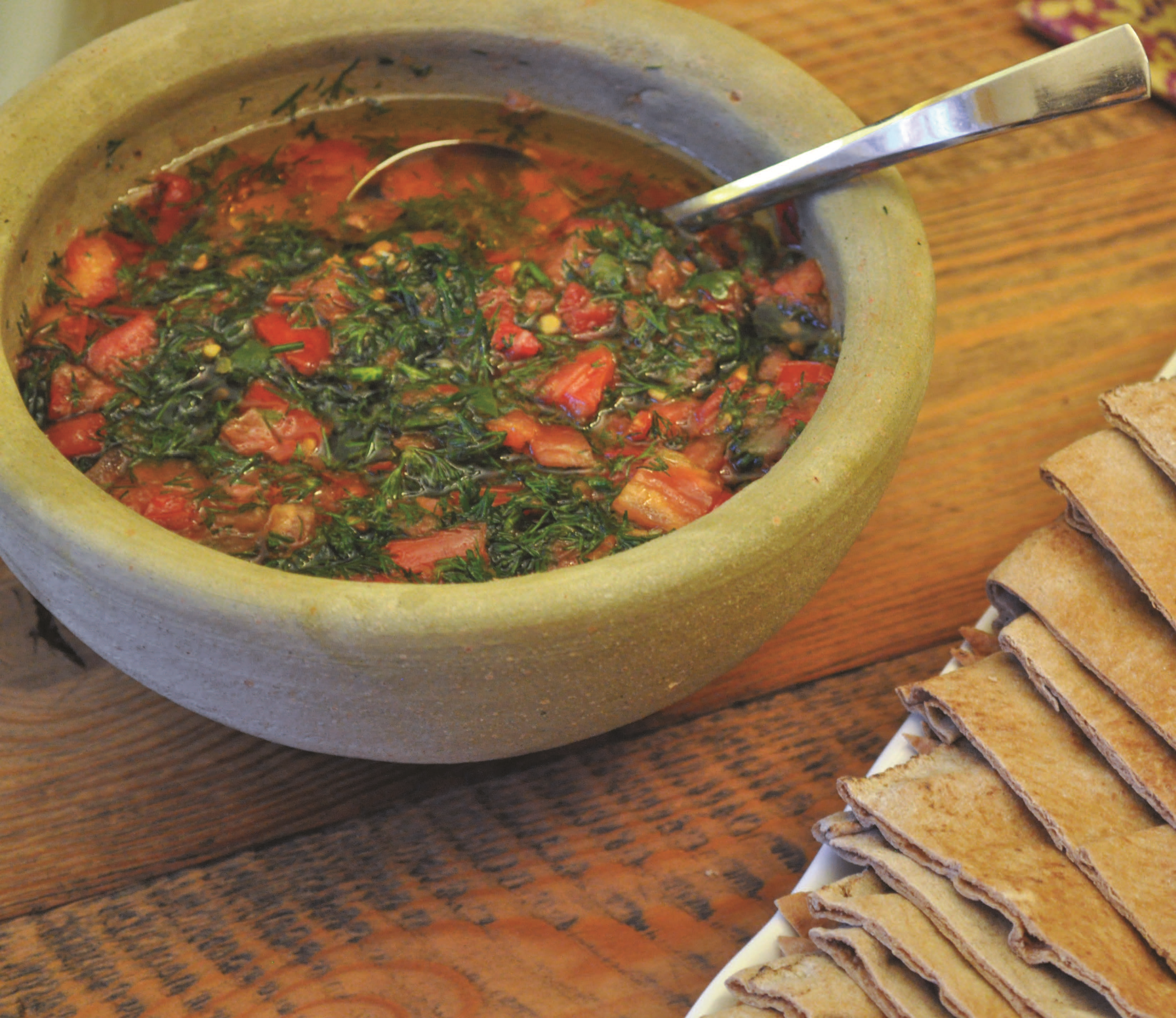 The Middle East Institute's Arts & Culture Program was pleased to host a conversation about the political, emotional and symbolic significance of food for displaced and diaspora communities. The panel explored the unifying role of food, its ability to generate empathy, and its power to build community among diverse peoples through the ritual sharing of a meal. The panel also discussed how food can serve as a source of income, a form of cultural resistance, and as a means of preserving identity and heritage for refugee communities in the face of loss.

The panel brought together authors and publishers of award winning cookbooks for an examination of the role of food in displaced societies.  Speakers included Michel Moushabeck (Interlink Publishing) whose book, Soup for Syria, features recipes donated by chefs, many of them celebrity chefs, to raise funds for Syrian refugees; Laila El-Haddad, author of The Gaza Kitchen: A Culinary Journey, featuring the culinary legacy of women and men from Gaza as they relate to cooking, farming, and the food economy; and Hazami Sayed (Al-Bustan Seeds of Culture), whose organization is currently exploring cross-cultural exchange and the theme of displacement among Philadelphia's diverse communities, using food to bring people together and foster understanding. The discussion was moderated by creative consultant and producer Honey Al Sayed.

Laila El-Haddad
Author, The Gaza Kitchen: A Palestinian Culinary Journey
Laila El-Haddad is an award-winning author, social activist, policy analyst, and freelance journalist based in the United States. An experienced public speaker, El-Haddad has provided insights on the situation in Gaza, the intersection of food and politics, and her own personal journey as a Palestinian mother and journalist to a wide range of audiences. El-Haddad has written for numerous publications including the Washington Post, the International Herald Tribune, and Le Monde Diplomatique. She has also appeared on several international broadcast networks such as NPR, CNN, and Aljazeera.  El-Haddad received her B.A. in Political Science and Comparative Area Studies from Duke University and her Master in Public Policy from the Harvard Kennedy School.

Michel Moushabeck
Founder, Interlink Publishing
Michel Moushabeck is a publisher, editor, writer, and musician. Since founding Interlink Publishing in 1987, Moushabeck has overseen the publication of over 100 cookbooks featuring cultural and culinary traditions from all over the world. He has authored four books, including Kilimanjaro: A Photographic Journey to the Roof of Africa, and A Brief Introduction to Arabic Music. Currently the lead percussionist of the Boston-based Layaali Arabic Music Ensemble, Moushabeck has many years of professional experience playing the tabla, riqq, and daff. Moushabeck serves on the board of directors of Media Education Foundation and on the board of trustees of the International Prize for Arabic Fiction.

Hazami Sayed is the founder of Al-Bustan Seeds of Culture, a non-profit dedicated to presenting and teaching Arab culture through the arts and language. As an Arab-American, Sayed initially founded Al-Bustan as a cultural day camp in 2002 in the hopes of developing a creative and supportive environment where her own children could learn the Arabic language and be immersed in Arab arts and culture while navigating their place in American society. Al-Bustan recently launched DISPLACED: Philadelphia, an initiative exploring the themes of displacement across Philadelphia's diverse communities, using food as a way to engage refugee and host communities. Sayed is a recipient of the Leeway Foundation's 2012 Transformation Award given to Philadelphia-area women artists committed to art-making for social change. Sayed received her B.A. in Economics from Stanford University and her Master of Architecture from Columbia University.

Honey Al Sayed (Moderator)
Creative Consultant and Producer
Honey Al Sayed is an independent creative consultant dedicated to advancing the interplay of media and the arts for socio-economic and political change, cultural dialogue, and peacebuilding. From 2005-2011, Al Sayed's award-winning radio program, "Good Morning Syria," pushed for positive social change by connecting with listeners via the arts, culture, education, spirituality, leadership, and self-improvement. Following the outbreak of the Syrian uprising, Al Sayed co-founded Radio SouriaLi, a grassroots, non-profit online radio station dedicated to fostering active citizenship, reconciliation, and democracy for the people of Syria. Organizations Al Sayed has previously worked with include the Geneva Centre for Security Policy, the United States Institute of Peace, Spark Media, and The Laboratory for Global Performance and Politics at Georgetown University. She holds an M.A. in International Affairs from the Fletcher School of Law and Diplomacy at Tufts University.