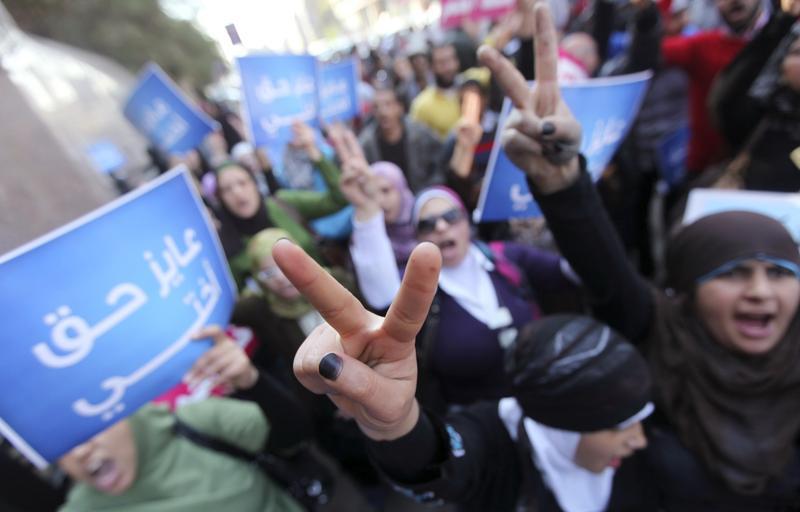 During the Arab Spring and the transitions that followed, women played a key role in political and civic movements while advocating for greater gender equality and increased women's empowerment. Yet four years later, the rise of extremism, growing security threats, and the reversal of early democratic gains threaten to undermine women's increased participation in public and civic life.

How can achievements in women's participation be reinforced and enhanced? The Middle East Institute was pleased to host Nadereh Chamlou (Former World Bank), May Rihani (UN Girls' Education Initiative), and Taleb Salhab (Education for Employment) for a panel discussion examining the gains Arab women have made in recent years and the keys to furthering women's important role in commerce, education, civil society, and political life in the Middle East. Nadia Bilbassy (Al-Arabiya) moderated.

Nadereh Chamlou
International Development Advisor and Former Senior Advisor to the Chief Economist, World Bank, Middle East and North Africa Region
Nadereh Chamlou is an advisor to governments, the United Nations, and international organizations. Previously, she was senior advisor at the World Bank, where, in her 33 year career, she held technical, managerial, coordination, and advisory functions in diverse areas such as economic management, private sector development, financial markets, knowledge economy, sustainable development, corporate governance, and gender. She worked across several regions and authored seminal books related to economic competitiveness, equity and fairness, talent pool and diversity, e.g. "Corporate Governance: A Framework for Implementation" (1999) that led to the establishment of the OECD/World Bank sponsored Global Corporate Governance Forum; "Gender and Development in MENA- Women in the Public Sphere" (2003); "The Environment for Women's Entrepreneurship in MENA" (2008); and the upcoming "Women, Work, and Welfare in the MENA" (2015).  She also founded the Persianate Global Network for Women's Economic Empowerment.

May Rihani
Former Co-Chair, United Nations Girls' Education Initiative
May A. Rihani has served as the senior vice president at FHI360, the Academy for Educational Development, and Creative Associates International for the past 30 years. In these capacities, Ms. Rihani was responsible for ensuring the planning and implementation of educational projects and the integration of gender perspectives in programs in education, economics, and health. Due to her global experience in gender, Ms. Rihani was elected as the co-chair of the United Nations Girls’ Education Initiative from 2008 to 2010. She is a leading international voice on the relationship between girls’ education and health, nutrition, empowerment, and economic productivity.  She has worked in over 40 countries and traveled to 71 countries. She wrote and published five books in English –four technical books and an autobiography-- and three poetry books in Arabic.

Taleb Salhab
Vice President, Programs and Affiliate Services, Education for Employment
Taleb Salhab has seventeen years of experience in senior leadership roles in the non-profit and private sectors. Most recently, he served as the director of the peace and security program at the Rockefeller Brothers Fund, where he led a multimillion dollar grant-making program. Prior to that, Mr. Salhab served as the national outreach director for the Arab Community Center for Economic and Social Services (ACCESS); the largest Arab- American human services organization in the United States. In that role, he directed the programs of a national network of 21 community based organizations in ten states. Mr. Salhab spent eight years in a senior leadership position in the private sector, serving as the director of sales & marketing for a large conglomerate in Florida working in the tourism and hospitality industries. Over his career, he has been a resource to civic groups and government, and has been interviewed extensively by national and international media.

Nadia Bilbassy (Moderator)
Senior Correspondent, Al-Arabiya TV
Nadia Bilbassy is a senior correspondent for Al Arabiya News Channel in the United States.  Ms. Bilbassy has been working as a foreign correspondent for over 20 years. She was the first Arab female journalist to be based in Nairobi, Kenya for a major Arabic TV station and has reported from conflict zones in Iraq, Sothern Sudan, Rwanda, Somalia, Congo and Eritrea. Since 2003, she has been based in Washington DC, for both Al-Arabiya, and MBC TV to report on U.S. foreign policy in the Middle East. She covered three presidential elections and reported about the 9/11 suspects from Guantanamo Bay.  Her interviews have included President Barak Obama, President George W. Bush, Prime Minister Tony Blair, President Mahmoud Abbas, President Yasser Arafat, Secretary of State Condoleezza Rice, and Queen Noor of Jordan. Ms Bilbassy began her career in Gaza during the first Intifada, in 1987, as reporter for Agence France Press.