Islamic Exceptionalism: How the Struggle Over Islam is Reshaping the World 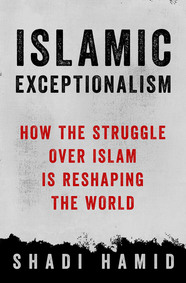 The Middle East Institute hosted a lively academic debate on July 27, 2016 on the inter-relationship of Islam and politics in response to the new book by Brookings fellow Shadi Hamid, Islamic Exceptionalism: How the Struggle Over Islam is Reshaping the World. Discussants Hassan Mneimneh (MEI) and Nathan Brown (The George Washington University) and moderator Sumaiya Hamdani (George Mason University) praised portions of the book while raising sharp disagreements with others.

“All religions are unique, but they’re not all unique in the same way,” Hamid said in his opening remarks.  “In both theory and practice, Islam has proven to be resistant to secularization.”

Hamid identified two sources of Islam’s exceptionalism. The first is the “founding moment” of Islam, when he said religion and the state became intertwined in the person of the Prophet Muhammad, who was a religious leader, head of state, and state-builder. This integration of roles stands in contrast to the founding of Christianity, Hamid argued, in that Jesus never governed a state.

The second source is the concept of Quranic inerrancy. Whereas Christians believe the Bible to be the word of God but accept that humans played a role in its writing, Muslims believe the Quran to be the actual speech of God.

Hamid argued against the assumption that Islam will – or necessarily should – become more secular and that Muslims will become more liberal with the advance of modernity. “Islam’s outsized role in politics is neither good nor bad…It just is,” he said.

Hamid argued that instability and violence in the Middle East are partially due to the struggle to define Islam’s relationship to the state and the struggle to make a pre-modern belief system relevant, applicable, and resonant in contemporary times. In order to resolve these conflicts, Hamid argues that we should be asking not how to minimize the role of Islam in public life, but how to normalize its role and make it less polarizing.

Hassan Mneimneh labeled Hamid’s background on the sources of Islam’s exceptionalism a “dangerous argument” that is “likely to bolster the rhetoric of and be welcome by the two quarters already sharing his views: Islamophobes and radical Islamists.” He argued that there are many conceptions of “the founding moment” of Islam, and that issues of religion and the state did not exist until they were injected into the story of the founding moment by scholars in the second and third centuries of Islamic history.

Mneimneh further argued that Hamid’s conception of Islam was too rigid, citing debates over Quranic inerrancy among scholars and common Muslims alike. Mneimneh further critiqued Hamid’s thesis, arguing that Hamid had ignored the context of communism, nationalism, and universalism surrounding the rise of Islamist parties.

Nathan Brown argued that essentialism underlies the argument of the first and last sections of Hamid’s book, and that the essential difference of Islam, if it exists, is not particularly informative. Like Mneimneh, Brown argued against what he saw as an assumption in Hamid’s thesis: that there is a core to Islam. He conceded that Islamic law features more prominently into Islamic history than other legal systems do in other histories, but argued this difference is unimportant. While disagreeing with Hamid’s introduction and conclusion, Brown congratulated Hamid on the case studies in Islamic Exceptionalism, especially those on Egypt and Tunisia.

Sumaiya Hamdani also critiqued Hamid’s approach; she emphasized that there is not a clear-cut understanding of what constitutes the founding moment of Islam, and that disagreements over the founding moment resulted in civil war through the Abbasid Period and the eventual separation of religion and state. Hamdani argued that early twentieth century leaders secularized Islamic history and presented it as a basis for a secular national identity. She argued that Hamid did not adequately address the role of Islam in national identity, as well as how the relationship between Islam and the state differs from Islam’s relationship with the caliphate. Finally, she asserted that Hamid should have more formally defined the terms he used in his book, like “modern” and “secular.”

In response to the critiques, Hamid acknowledged the diversity within Islam, but argued that religions have boundaries and central credos, and it is upon those credos that he based his thesis. “If we engage too much in Islamic apologetics and try to say ‘Islam can be anything and Islam has an endless capacity to be totally liberal like everything else,’ we are not being honest and we are ceding the territory to those who are making a more convincing argument,” he said. “That, actually, is the most dangerous thing we can do in the era of Trump.”

In response to Hamdani’s point that religion and state were separated centuries ago, Hamid argued that separating clerics from governance of the caliphate is not equivalent to separating religion from politics. Hamid argued many political parties, Islamists and non-Islamists alike, believe Islam should play a role in public life, but disagree over what its role should be.

Sumaiya Hamdani argued the Quran does not speak to politics, Shari’a does not have political content, and the Holy Roman Empire was the Western counterpart of the Muslim caliphate. Mneimneh argued Christianity may be even more exceptional than Islam because it gave birth to the idea of “natural law,” which has become a kind of supranational law governing secular and religious matters. Brown contended that Hamid’s argument is important because it depicts actual Muslim thought instead of insisting that Islam reform before issues of religion and politics can be dealt with.

Author:
Shadi Hamid
Senior Fellow, Brookings Institution
Shadi Hamid is a senior fellow in the Project on U.S. Relations with the Islamic World in the Center for Middle East Policy and the author of the new book "Islamic Exceptionalism: How the Struggle Over Islam is Reshaping the World" (St. Martin's Press). His previous book "Temptations of Power: Islamists and Illiberal Democracy in a New Middle East" (Oxford University Press, 2014) was named a Foreign Affairs "Best Book of 2014." Hamid served as director of research at the Brookings Doha Center until January 2014. Prior to joining Brookings, he was director of research at the Project on Middle East Democracy (POMED) and a Hewlett Fellow at Stanford University's Center on Democracy, Development, and the Rule of Law. Hamid is a contributing writer for The Atlantic and the vice-chair of POMED's board of directors.
Discussants:
Hassan Mneimneh
Non-Resident Scholar, MEI
Hassan Mneimneh specializes in the Middle East and North Africa and the wider Islamic world with a particular emphasis on radicalism and factionalism. In previous capacities, he has focused on the significance of socio-political and cultural developments in the MENA region to U.S. and European policies; assessed civil reaction to radicalizing tendencies in Muslim societies; and studied the evolution, record, and prospects of radical Islamist formations worldwide. He has written on political, cultural, historical, and intellectual questions concerning the Arab and Muslim worlds. He is a regular contributor to the pan-Arab newspaper al-Hayat, and is currently affiliated with Middle East Alternatives and Fikra Forum. His previous affiliations include the German Marshall Fund of the United States, Hudson Institute, the American Enterprise Institute, and the Iraq Memory Foundation.
Nathan Brown
Professor and Director of the Institute for Middle East Studies, The George Washington University
Nathan Brown received his B.A. in political science from the University of Chicago and his M.A. and Ph.D. in politics and Near Eastern Studies from Princeton University. He teaches courses on Middle Eastern politics, as well as more general courses on comparative politics and international relations. His dissertation received the Malcolm Kerr award from the Middle East Studies Association in 1987. For 2013-2015, Dr. Brown is president of the Middle East Studies Association, the academic association for scholars studying the region. In 2013, he was named a Guggenheim Fellow; four years earlier, he was named a Carnegie scholar by the Carnegie Corporation of New York. For the 2009-2010 academic year, he was a fellow at the Woodrow Wilson International Center for Scholars. In addition to his academic work, Brown serves on the Middle East and North Africa advisory committee for Human Rights Watch and the board of trustees at the American University in Cairo. He has previously served as an advisor for the committee drafting the Palestinian constitution, USAID, the United Nations Development Program, and several NGOs.
Sumaiya Hamdani (moderator)
Associate Professor of World History, George Mason University
Dr. Hamdani received her B.A. from Georgetown University and M.A. and Ph.D. from Princeton University in the field of Islamic history. Her book, Between Revolution and State: the Construction of Fatimid Legitimacy (I.B. Tauris 2006) examines the development of legal and historical literature by the Ismaili Shi'i Fatimid state. Her research has also included articles and reviews in the fields of Shi'i thought, Islamic history, and women in Islam. Her teaching interests include Islamic, Middle East, and world history. Her current research examines the construction of identity in Muslim minority communities in South Asia during the colonial and post-colonial periods. Dr. Hamdani has served on advisory boards of the Middle East Studies Association, the American Institute of Yemeni Studies, and the North American Association of Islamic and Muslim Studies, among others. She also founded and was director of the Islamic Studies program at George Mason University from 2003-2008.