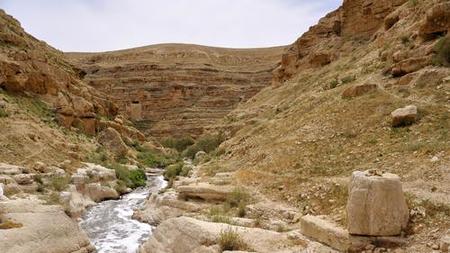 The Kidron Valley (Wadi Nar in Arabic) which stretches from Jerusalem through the Judean Desert to the Dead Sea, has been ravaged by years of unchecked development and neglect, creating an environmental disaster affecting residents on both sides of the Israeli-Palestinian divide with major economic and health consequences.

The Middle East Institute and the Foundation for Middle East Peace (FMEP) are pleased to host Avner Goren (The Abraham Path Initiative, Engineers without Borders) and Rana Khalaf (Afaq School for Special Education) to discuss their efforts to address this challenge through the Kidron Valley/Wadi Nar Master Plan, which aims to find an environmental solution that transcends boundaries and political differences. The panelists will focus on their collaborative effort to preserve cultural landmarks, empower local populations through environmental education and other initiatives, and transform the Kidron Valley through improved planning, land usage, and infrastructure.

Avner Goren is an archaeologist specializing in cultural tourism and desert and Bedouin archaeology. He has participated in excavations all over Israel and served as Chief Archaeologist in the Sinai Peninsula for 15 years. Goren is a member of Engineers Without Borders and is currently Israel’s national director of the Abraham Path Initiative. Within the Kidron Valley Master Plan, Goren heads research concerning culture and heritage, history, pilgrimage, tourism, and archaeology.

Rana Khalaf is the principal of the Afaq School for Special Education and has worked as a teacher, school principal, and instructor for other teachers in the Sur Baher neighborhood of East Jerusalem. She served as the director of the Jerusalem Educational Authority, where she developed social education processes for gifted students and created courses and workbooks for school principals. Ms. Khalaf currently sits on the Board of Directors for several non-profit organizations that promote education and women’s issues within the Arab community.

Amb. Wendy Chamberlin (Moderator) has been president of the Middle East Institute since 2007. Previously, as deputy high commissioner for refugees from 2004 to 2007, she supervised the administration of the U.N. humanitarian organization. A 29-year veteran of the U.S. Foreign Service, she was ambassador to Pakistan from 2001 to 2002, when she played a key role in securing Pakistan’s cooperation in the U.S.-led campaign against al-Qaeda in Afghanistan in the wake of the terrorist attacks against the U.S. on September 11.  Her opinion pieces have been published in the Washington Post, International Herald Tribune, and Philadelphia Inquirer, among others.