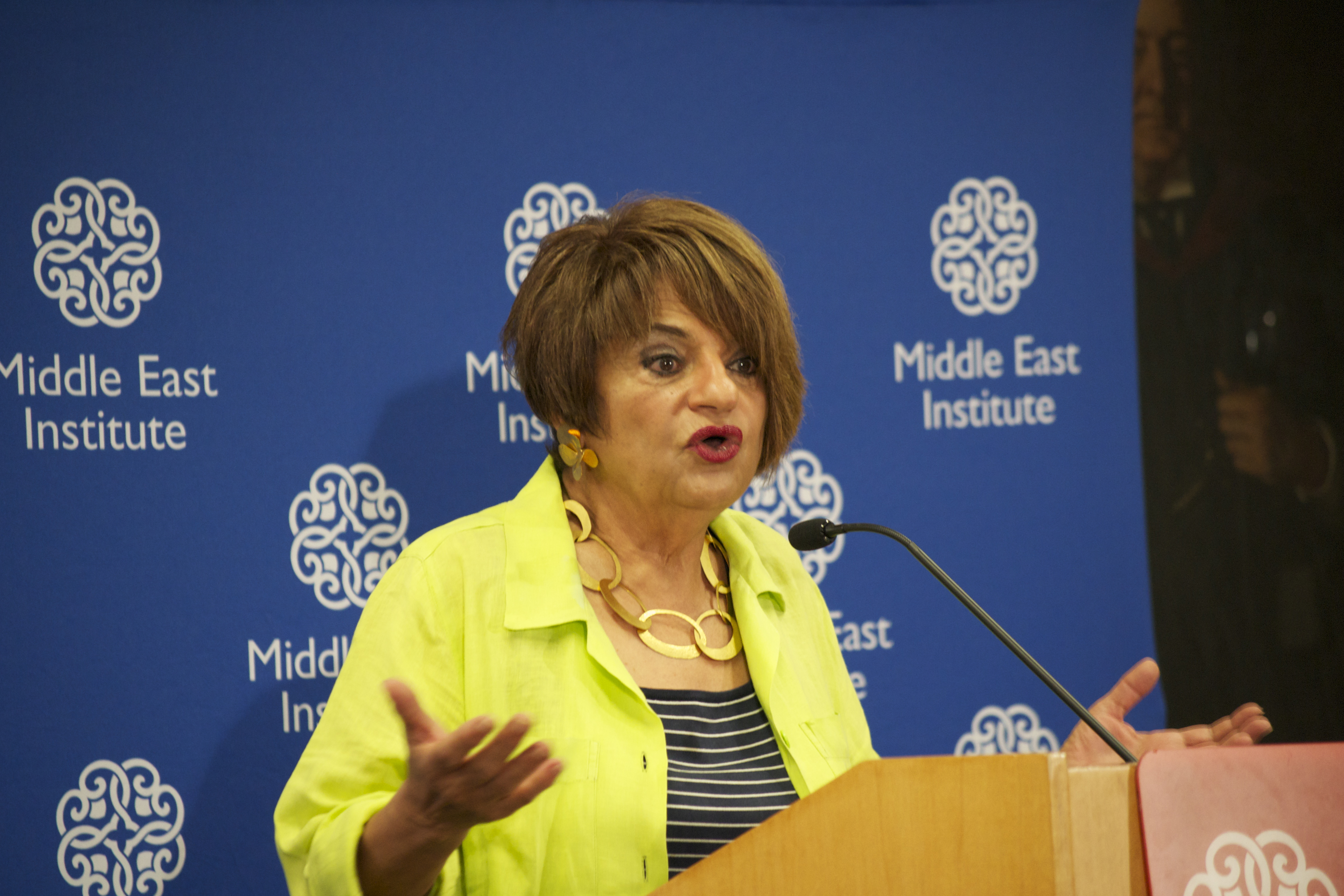 On July 11, 2013, the Middle East Institute held an event titled “Mona Makram-Ebeid on Egypt’s Political Future.” Mona Makram-Ebeid served on Egypt’s Shura Council under President Mohamed Morsi and has taught at the American University in Cairo for 17 years. Dr. Makram-Ebeid recently resigned from the Shura Council, however, in support of the Tamarod movement, and she offered MEI’s audience an insightful first-hand perspective on the challenges ahead following the June 30th protests that culminated in the ouster of Mohamed Morsi. MEI President Ambassador Wendy Chamberlin moderated the event.

Dr. Makram-Ebeid began her talk by describing the recent events as the “most exciting but terribly dangerous days of my political career.” Assessing the Tamarod movement, she noted that the older generation was at first skeptical of the young people’s ability to collect more than 15 million petition signatures. Nevertheless, Dr. Makram-Ebeid was transfixed by Tamarod’s courage and determination in carrying out their goal. She illustrated the scene she observed in Tahrir, where three million Egyptians were “filled with a sense of hope,” especially when they were encouraged by the support of the army and the police. By July 2, after Dr. Makram-Ebeid helped draft the written popular demand for the army to intervene in order to prevent a “disastrous bloodbath,” the Morsi era was over.

Dr. Makram-Ebeid discussed whether the situation was inevitable. After the 2011 revolution, she posited that any wise government would have instilled a sense of pride and hope in Egyptians. This is where Morsi, possessing “whatever the opposite of charisma is,” failed. The Muslim Brotherhood’s rule became increasingly authoritarian as they institutionalized Islamic ideology and filled the government with Morsi’s “cronies.” As a result, the government lost the confidence of most Egyptians. Dr. Makram-Ebeid posited that had Morsi not done such an abysmal job as president and given the opposition a voice, he might still be in power.

The speaker then addressed the question of the hour: whether the military’s intervention can be classified as a coup. She first asserted that the classification is unimportant, given that Morsi’s ouster is in the past, but she also revealed that the Obama administration was wise to not use the word “coup” in order to prevent a suspension of U.S. military assistance to Egypt. Inaction by the military would have been criminal, she argued, as it both prevented a bloodbath that would have scarred Egypt for decades and saved Morsi from the mercy of a mob.

After discussing the concerns of the opposition during Morsi’s rule, Dr. Makram-Ebeid quoted Thomas Jefferson, saying, “Every generation needs a new revolution.” According to Dr. Makram-Ebeid, the recent events in Egypt are “fully in keeping with the ideals expressed by one of the most prominent founders of democracy.” She noted that it took the U.S. more than a decade to go from declaring independence to ratifying its Constitution, indicating that it takes time to fully establish a working democracy.

Dr. Makram-Ebeid moved on to suggestions for the United States, encouraging investment and financial assistance in order to alleviate Egypt’s most serious economic ills. Democracy can only find root when people have a job and a voice, she said.  Therefore, solving social inequality and the economic crisis must be paramount.

Dr. Makram-Ebeid concluded by suggesting that all actors involved have learned critical lessons over the last two years. She emphasized that the Muslim Brotherhood is not out of the picture, and the military has no particular interest in democracy. What lies ahead is a “struggle over the soul of Egypt,” and Egyptians will not give up on constitutionalism, citizenship, and sovereignty.

In the Q&A, Ambassador Chamberlin asked about the future of the Tamarod movement. Dr. Makram-Ebeid responded hopefully, stating that if the young people work efficiently, their momentum could translate into a grassroots organization and eventually a political party. The Cato Institute’s Stanley Kober recalled her mention of Thomas Jefferson, noting that she left out the part of his quotation that mentions that a revolution must be refreshed from time to time with blood. Dr. Makram-Ebeid responded that she quoted what she wanted to, and saw Jefferson’s main point as support of revolutionary resistance.

Several questions sought more discussion about the future of Egypt’s economy. Dr. Makram-Ebeid emphasized the precarious state of the Egyptian economy, but said she is optimistic now that the government includes top-notch economists such as Prime Minister Hazem Beblawi. She stressed that the economy is the number one priority, and the international community, including the International Monetary Fund, should support the government that has the support of the people

The National Democratic Institute’s Layla Gafar introduced herself as one of the NGO workers sentenced to a five-year prison sentence in absentia in early June. Ms. Gafar asked Dr. Makram-Ebeid to predict the chances that she would be able to return to Egypt in order to help support parties like Tamarod. In response, Dr. Makram-Ebeid allowed that the judgment was politicized and not based on evidence. She expressed the need for a clear, respected NGO law, and offered that once this is accomplished, Ms. Gafar should be able to return. Dr. Makram-Ebeid added that “you drank the waters of the Nile, so how can you not return?”

Dr. Mona Makram-Ebeid recently resigned from Egypt's Shura Council in support of the Tamarod movement.  She is the head of the Committee of Social Rights at the National Council on Human Rights. Dr. Makram-Ebeid is distinguished lecturer in the department of political science at the American University in Cairo, where she has been teaching for the past 17 years. She was a member of Parliament in Egypt from 1990-1995. Prior to that, she worked as an adviser to the World Bank for the MENA region from 1992-1996. Later she was appointed as an expert to the U.N. Committee for Policy Development (CPD) from 2000-2003  and as a regional expert for the Arab States at the UNDP's Capacity 21 Programme  from 2000-2003. She founded the Association for the Advancement of Education, was a member of the International Consultation Group for the Middle East at the Center For Strategic and International Studies (CSIS) Washington, and is a founding member of the Arab Organization For Human Rights.  She is a frequent media commentator and often contributes to programs such as CNN, BBC Hard Talk, NBC, the Doha Debates, and Al Hurra. She was awarded the Distinguished Alumni Award (AUC) and the grade of Officier de La Legion d'honneur (France) as well as the Hall of Fame award.

Amb. Wendy Chamberlin has been president of the Middle East Institute since 2007. Previously, as deputy high commissioner for refugees from 2004 to 2007, she supervised the administration of the U.N. humanitarian organization. A 29-year veteran of the U.S. Foreign Service, she was ambassador to Pakistan from 2001 to 2002, when she played a key role in securing Pakistan’s cooperation in the U.S.-led campaign against al-Qaeda in Afghanistan in the wake of the terrorist attacks against the U.S. on September 11.  Her opinion pieces have been published in the Washington Post, International Herald Tribune, and Philadelphia Inquirer, among others.