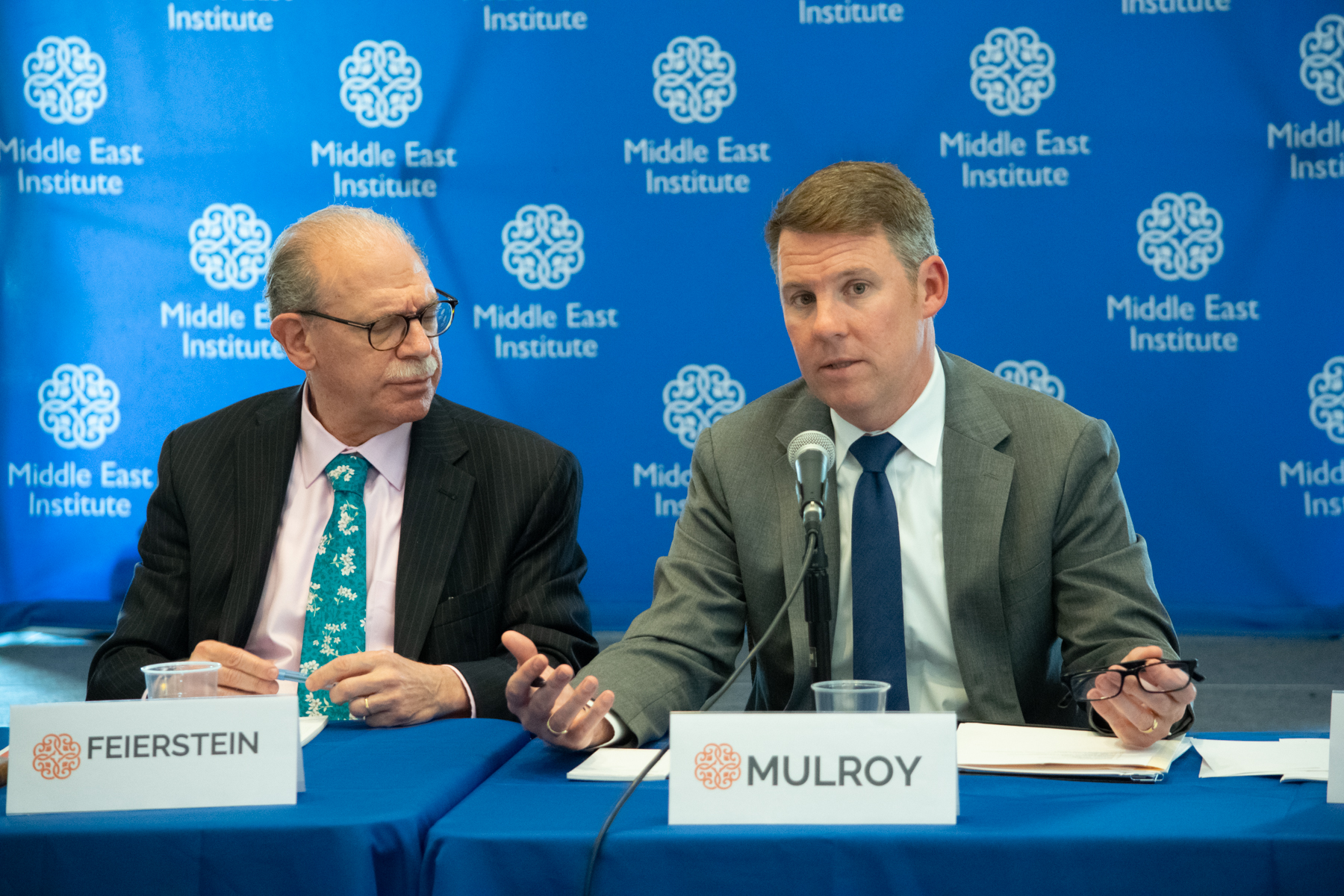 Thank you all for being here today.  I want to thank the Middle East Institute for hosting this event. We believe discussing these important issues with think-tanks and institutions from across the spectrum of ideas helps creates the most effective and enduring national security policy.

I am the Deputy Assistant Secretary of Defense for Middle East.  I have been in this position for a year and a half – starting one day after retiring from the CIA, where I served as a Paramilitary Operations Officer.  Much of my career was in conflict areas.  This gave me a first-hand perspective on the importance of building real partnerships.

We are committed to the implementation of the National Defense Strategy.  Developed under Secretary Mattis and nested in the President’s National Security Strategy, it remains our guidepost, and it charts the course for increasing partner capacity worldwide.

The NDS directs us to find ways to conduct missions in a more sustainable and efficient manner.  In the Middle East, we recognize the heavy U.S. troop presence in the region since 9/11 is difficult to maintain and, at times, hard to justify.  Building partner capacity is a key way of staying engaged and investing in long-term stability, while reducing our footprint.

The NDS instructs us to strengthen alliances and directs us to a more resource-sustainable approach for sharing responsibility for the common defense and reducing our security burden.

Building our partners’ capacity has been a common theme across administrations.  We have looked to build up Iraq's capacity to advance its self-sufficiency and in turn decrease our own footprint.  We have emphasized the “by with and through” method in the region, with a particular lens towards counter-terrorism operations.  The current NDS looks to advance these efforts.

I’d like to discuss three partnerships in the region where DoD has focused on building partner capacity: the Iraqi Security Forces, Syrian Democratic Forces, and the Jordanian Armed Forces.  These efforts are crucial to regional stability and to securing U.S. interests in the region.

Iraq
The first example I want to highlight is our work with the Iraqi Security Forces.  The security partnership is the foundation of a stable region for both Iraqis and Americans.  When I was last in Iraq in March, every member of the government underscored the importance of its security partnership with the United States and the broader Coalition.  Iraq’s Prime Minister, President, and Speaker emphasized the importance of maintaining the Coalition’s presence in Iraq to prevent an ISIS resurgence.  The 5,200 U.S. forces operating in Iraq are present at the express invitation of the government of Iraq and anchored in the Strategic Framework Agreement signed by our two countries more than 10 years ago.

Ensuring the enduring defeat of ISIS remains a vital U.S. national security interest.  Five years ago, ISIS controlled approximately 55,000 square kilometers and more than 4 million people in Iraq lived under their oppressive rule.  Now they do not.

The U.S. mobilized Global Coalition to Defeat ISIS, which now stands at 80 members.  The Combined Joint Task Force-Operation Inherent Resolve, which includes the U.S. and fifteen other nations, continues to help train and equip 28 Iraqi brigades comprising thousands of soldiers.  They brought immense firepower against ISIS through thousands of airstrikes and the expertise of thousands of experienced U.S. and Coalition advisors building the capacity of Iraq’s soldiers. Iraq’s Counterterrorism Service among the region’s most capable and serves as a testament to the importance and effectiveness of building partner capacity missions.

The priority now is to ensure U.S. and Coalition investments in the D-ISIS fight outlive the warfighting of the last five years.  We will continue to empower Iraq’s security forces to protects its sovereignty and prevent and ISIS resurgence.  We are resolute in our commitment to Iraq’s security and prosperity, but critics of our military presence often insinuate vague ulterior motives.  The premise of our capacity-building initiatives is to help Iraqis secure Iraq.  The more capable Iraq’s security institutions, the more resilient Iraq will be in the face of malign foreign actors bent on coercion and exploitation.

The best way to honor Coalition and Iraqi sacrifices is preserve an enduring partnership and invest in Iraq’s long-term capacity and stability.

Syrian Democratic Forces (SDF)
A second example of our BPC efforts in the region is the Syrian Democratic Forces, or SDF.  Our partnership with the SDF is a unique and powerful example of the success of our “by-with-through” approach to counterterrorism.  Partnering with the SDF enabled the defeat of the ISIS “so-called” caliphate with limited U.S. and Coalition resources.  When the official announcement came in March that we had defeated the final remaining territory held by ISIS in Syria, it was announced by the Syrian Democratic Forces.  This happened following SDF’s liberation of the final pockets of territory in Syria from ISIS’s control.

The U.S. military, with support from the Coalition, has partnered with, trained, equipped, and enabled the SDF, which grew from a few hundred members in 2015 to what it is today – a thousands-strong multi-ethnic force of Syrians that includes Arabs, Kurds, Syriac, and other ethnic groups.  SDF forces have been fighting to take back their homeland from ISIS, and they remain committed despite suffering thousands of casualties.  It is important to mention them because, even though the so-called caliphate is defeated, ISIS remains a significant threat.

The work ahead includes supporting our partners to manage the large number of ISIS fighters the SDF has detained over the last few months and years.  The SDF is bearing the burden of holding over 2,000 foreign terrorist fighters from over 50 countries.  We must press partners to repatriate their citizens.  In addition, the SDF and its civilian counterparts are facing significant humanitarian and security challenges at al-Hawl and other IDP camps in NE Syria.  The SDF is working with the international community to address these challenges, but we must support local partners to stabilize the areas that have been liberated from ISIS’s control.

It is also important to highlight the work of our other D-ISIS partners in Syria known as the Mughawir al-Thawra, or MaT. The MaT, a force comprised of Arab tribal members, continues to conduct daily counter-ISIS patrols in the 55 kilometer deconfliction zone around At Tanf Garrison. The MaT provides security and stability within the zone to support the D-ISIS Coalition campaign.

The tasks at hand are tall, but we are confident that together we will ensure a lasting defeat for ISIS in Syria, as well as meet our other goals for Syria, including the implementation of UNSCR 2254 to ensure all Syria are part of the future of their country.

Jordan
The final example I will highlight is our work with the Jordanian Armed Forces.  Jordan is a crucial ally for the U.S. in the region and globally. The Jordan Armed Forces and Royal Air Force are a highly-professionalized force.  King Abdullah’s “Aqaba Process” strengthens our calls to combat extremism and establishes Jordan as a leader in countering radical ideology. Jordan’s strategic location and status as an interoperable partner provides us with a stable and capable partner in the region.

Our partnership with the Jordanian Armed Forces goes back decades.  U.S. security assistance spans training, joint exercises, institution building activities, and U.S. equipment.  Since the 1950s, the U.S. has given over $15 billion to the Government of Jordan, though most of this has been in the shape of economic assistance.  We continually work with Jordanian military leadership on identifying its needs, capabilities, and gaps to apply security assistance towards mutual threats.  In fiscal year 2018 alone, the United States provided over $478 million in combined State and DoD security assistance.

Our partnership with the Jordanian Armed Forces reflects the success of a holistic approach to building partner capacity activities.  We regularly evaluate the effectiveness of our security assistance and balance this effort with our economic support.  The Syrian war has strained the Jordanian economy.  With the closure of trade with Syria, Jordan lost a vital trade route to Europe while simultaneously absorbing hundreds of thousands of refugees.  To help Jordan overcome these challenges, the USG entered into a five-year MOU in 2018 that provides Jordan more than $1.2 billion each year in assistance, nearly $1B of which is economic assistance.  These combined efforts have produced a capable force and a reliable partner.

As someone who spent a career training and fighting alongside partners, I can say that these relationships are much more than a talking point in a speech.  They represent the will and resolve of the international community to defend those that cannot defend themselves and provide lasting security that benefit all.  As the NDS calls for an economy-of-force posture in the region, these efforts will become all the more important.

I appreciate the opportunity to speak with you all today.  I look forward to your questions.

Ambassador (ret.) Gerald Feierstein
Senior Vice President, MEI
Ambassador (ret.) Gerald Feierstein is senior vice president at MEI. He retired from the U.S. Foreign Service in May 2016 after a 41-year career with the personal rank of Career Minister. As a diplomat he served in nine overseas postings,
including three tours of duty in Pakistan, as well as assignments in Saudi Arabia, Oman, Lebanon, Jerusalem, and Tunisia. In 2010, President Obama appointed Amb. Feierstein U.S. Ambassador to Yemen, where he served until 2013. From 2013 until his retirement, Amb. Feierstein was Principal Deputy Assistant Secretary of State for Near Eastern Aﬀairs