Resistance at 70: the future of the Palestinian national movement 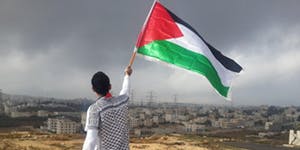 Seventy years after the Nakba, the Palestinian dispossession and exile that accompanied the establishment of the State of Israel in 1948, Palestinians today remain stateless. Their prospects for securing collective or individual rights are bleaker than they have been for decades. Alongside the international and regional developments that are undermining their quest for self-determination, Palestinians are also on the cusp of a leadership change that could have far reaching implications for their collective future.

News emerging from the Gaza Strip today offers a glimpse that Palestinians are entering a new phase in their struggle. Drawing on his newly-released book, Hamas Contained: The Rise and Pacification of Palestinian Resistance, Tareq Baconi will reflect on the wider trajectory of Palestinian nationalism through the prism of Hamas and the extraordinary challenges faced by Palestinians in Gaza. He will be joined by, Khaled Elgindy, who will address the history of American policy towards the Palestinians and the peace process and its impact on the Palestinian leadership more broadly. Noura Erekat, who will focus on the role of international law in shaping the current Palestinian predicament and assess Palestinian officialdom’s legal strategy since 2000 to indicate possible horizons. The discussion will be moderated by FMEP President Lara Friedman.

Khaled Elgindy
Fellow, Center for Middle East Policy, The Brookings Institution
Khaled Elgindy is a fellow with the Center for Middle East Policy at the Brookings Institution. He previously served as an advisor to the Palestinian leadership in Ramallah on permanent status negotiations with Israel, and was a key participant in the Annapolis negotiations held throughout 2008. Khaled is the author of the forthcoming book, Blind Spot: America and the Palestinians from Balfour to Obama (Brookings Press).

Noura Erakat
Assistant professor, George Mason University
Noura Erakat is a human rights attorney and an assistant professor at George Mason University. Her research interests include humanitarian law, refugee law, national security law, and critical race theory. Noura is a co-Founding editor of Jadaliyya and an Editorial Committee member of the Journal of Palestine Studies. She is the author of Justice for Some: Law as Politics in the Question of Palestine (Stanford University Press, forthcoming 2019).

Lara Freidman, moderator
President, Foundation for Middle East Peace
Lara Friedman is the president of the Foundation for Middle East Peace (FMEP). Prior to coming to FMEP, Lara was the director of policy and government relations at Americans for Peace Now, and before that she was a U.S. Foreign Service Officer,  serving in Jerusalem, Washington, Tunis and Beirut. Friedman is a leading authority on U.S. foreign policy in the Middle East, with particular focus on the Israeli-Arab conflict, settlements and Jerusalem, and on the role of the U.S. Congress. She frequently briefs members of Congress, Administration officials, and others in the foreign policy/national security community, and is regularly published in the U.S. and Israeli press. Friedman works closely with Jerusalem expert Danny Seidemann and his NGO “Terrestrial Jerusalem,” participates in various Track II Israeli-Palestinian efforts, and is a non-resident fellow at the U.S./Middle East Project (USMEP).