The Role of Think Tanks in Shaping Middle East Policy 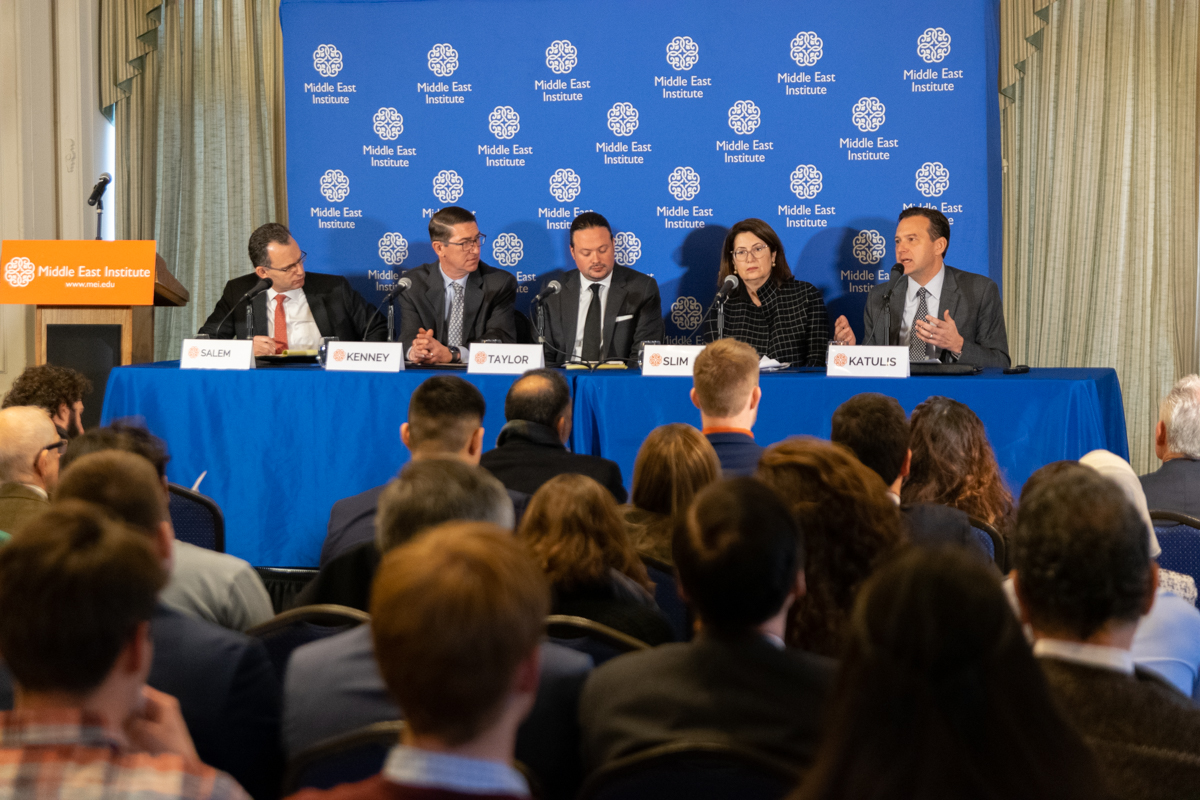 In a time of increasing unpredictability in U.S. foreign policy as well as in relationships in the Middle East, the role of think tanks in the policy space has come into question. In light of an apparent U.S. withdrawal from the region, how can think tanks remain relevant and effective in their policy work? Conversely, how can think tanks in the region continue to promote objective analysis and dialogue in light of increasingly tense diplomatic relationships?

On January 31, The Middle East Institute (MEI) is pleased to host a panel of think tank leaders to discuss the ways in which think tanks can anticipate the long-term trends impacting the region’s future.

This event will be held in conjunction with Jim McGann’s Think Tanks and Civil Societies Program.  Earlier that same day, the Think Tanks and Civil Societies Program at the University of Pennsylvania will release its 2018 rankings of think tanks. This annual report is the industry standard and rates 6,800 think tanks throughout the world, including the 1,835 think tanks in the United States alone.

Sami Atallah, who is trained in economics and political science, is the director of the Lebanese Center for Policy Studies (LCPS).  He is currently leading several policy studies on political and social sectarianism, electoral behavior, role of municipalities in dealing with the refugee crisis, economic diversification and industrial policy, and governance of the oil and gas sector. Atallah served on the Committee established by the Lebanese Prime Minister to draft a decentralization law and he participated in the parliamentary committee which is reviewing the draft law. He has several policy and academic publications. He is the editor of Towards Achieving a Transparent and Accountable National Budget in Lebanon (Beirut: LCPS 2013), co-editor of Democracy, Decentralization, and Service Delivery in the Arab World (with Mona Harb, Beirut, LCPS 2015), co-editor of the book on Hollowing out the Lebanese Parliament 2009-2017 (with Nayla Geagea, Beirut, LCPS 2018), and co-editor of The Future of Oil in Lebanon: energy, Politics, and Economic Growth (with Bassam Fattouh, I.B. Tauris, forthcoming). He has also authored and co-authored several papers on industrial policy, sectarianism, and electoral behavior. He holds two Masters degrees in International and Development Economics from Yale University (1996) and in Quantitative Methods from Columbia University (2004).

Brian Katulis is a senior fellow at the Center for American Progress, where his work focuses on U.S. national security strategy and counterterrorism policy. For more than a decade, he has advised senior U.S. policymakers on foreign policy and has provided expert testimony several times to key congressional committees, including the U.S. Senate Committee on Foreign Relations and the U.S. Senate Armed Services Committee.

Steven Kenney is the founder and principal of Foresight Vector LLC, a firm providing specialist advisory services in strategy development and implementation, organizational culture, organizational change, and leader development. Recognized for his expertise in strategic foresight, for more than twenty-five years he has advised government, corporate, and non-profit sector organizations on how to create their future. Kenney’s work helps client organizations and their leadership teams define their direction and adapt their plans, people, processes, and more to be able to achieve their greatest success. Prior to founding Foresight Vector, he was a vice president at Monitor 360, and a partner with Toffler Associates, the executive advisory firm founded by world-renowned futurist Alvin Toffler.

Randa Slim is director of Conflict Resolution and Track II Dialogues program at MEI and a non-resident fellow at the Johns Hopkins University School of Advanced and International Studies (SAIS) Foreign Policy Institute. A former vice president of the International Institute for Sustained Dialogue, Slim has been a senior program advisor at the Rockefeller Brothers Fund, a guest scholar at the United States Institute of Peace, a program director at Resolve, Inc, and a program officer at the Kettering Foundation. A long-term practitioner of Track II dialogue and peace-building processes in the Middle East and Central Asia, she is the author of several studies, book chapters, and articles on conflict management, post-conflict peace-building, and Middle East politics.

Paul Salem, moderator
President, MEI
Paul Salem is president at MEI. He focuses on issues of political change, transition, and conflict as well as the regional and international relations of the Middle East. He has a particular emphasis on the countries of the Levant and Egypt. Salem writes regularly in the Arab and Western press and has been published in numerous journals and newspapers. Salem is the author and editor of a number of books and reports including From Chaos to Cooperation: Toward Regional Order in the Middle East (ed. with Ross Harrison, 2017), Broken Orders: The Causes and Consequences of the Arab Uprisings (In Arabic, 2013), “The Recurring Rise and Fall of Political Islam” (CSIS, 2015), “The Middle East in 2015 and Beyond: Trends and Drivers” (MEI 2014), Bitter Legacy: Ideology and Politics in the Arab World (1994), Conflict Resolution in the Arab World (ed., 1997).  Prior to joining MEI, Salem was the founding director of the Carnegie Middle East Center in Beirut, Lebanon between 2006 and 2013.  From 1999 to 2006, he was director of the Fares Foundation and in 1989-1999 founded and directed the Lebanese Center for Policy Studies, Lebanon's leading public policy think tank.