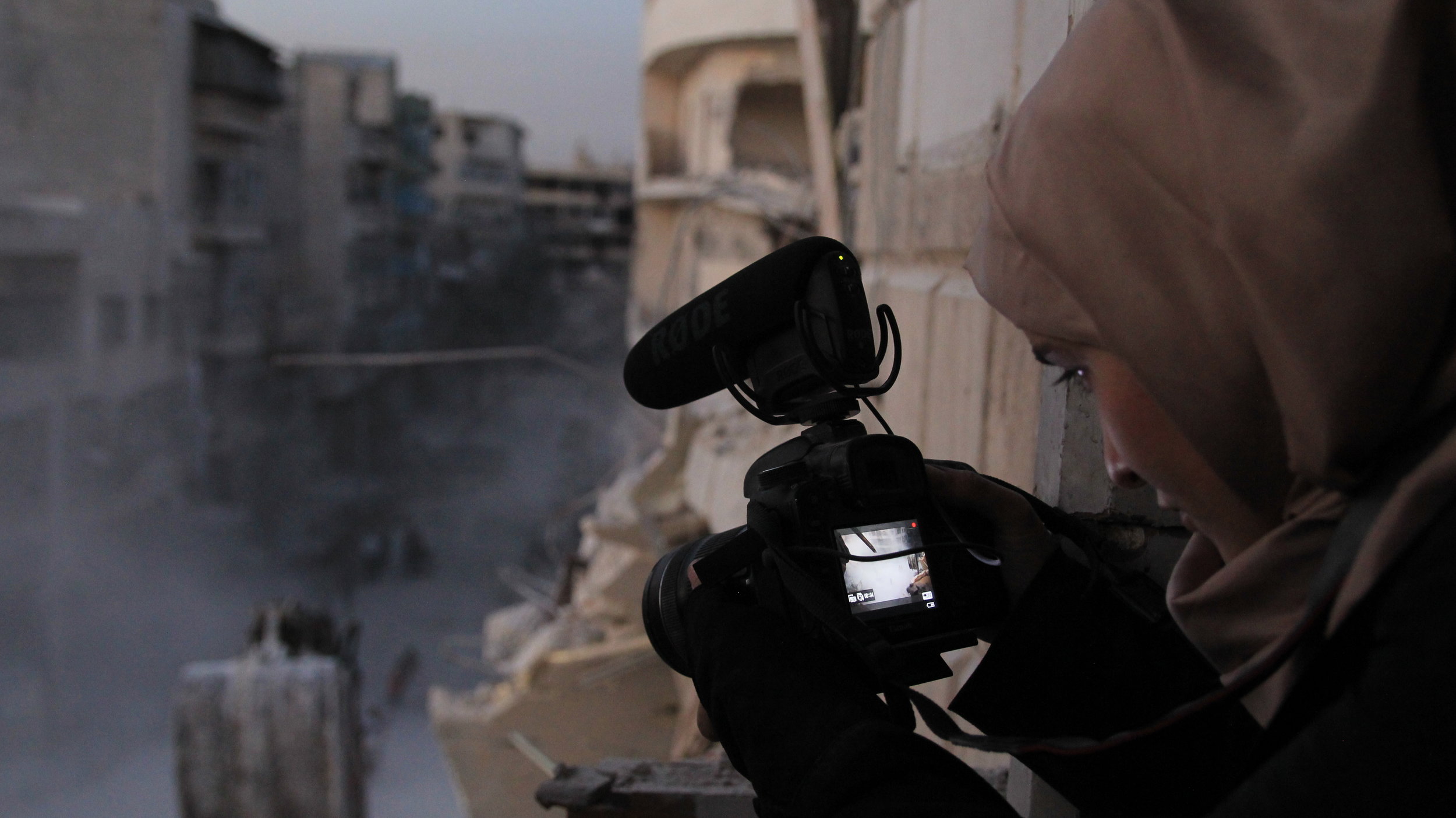 The Middle East Institute (MEI) is pleased to host a special film screening of FOR SAMA, which chronicles the life of Waad al-Kateab through five years of the uprising in Aleppo, Syria as she falls in love, gets married and gives birth to her daughter Sama.

Filmed by al-Kateab, For Sama captures stories of loss, laughter and survival as she wrestles with an impossible choice - whether or not to flee Aleppo to protect her daughter’s life, when leaving means abandoning the struggle for freedom for which she has already sacrificed so much.

Waad al-Kateab started documenting the horrors of Aleppo for Channel 4 News in January 2016 in a series of devastating films simply titled Inside Aleppo. The reports she made for Channel 4 News on the conflict in Syria, and the most complex humanitarian crisis in the world, became the most watched pieces on the UK news programme – and received almost half a billion views online and won 24 awards – including the 2016 International Emmy for breaking news coverage. Waad was a marketing student at the University of Aleppo when protests against the Assad regime swept the country in 2011. Like many hundreds of her fellow Syrians, she became a citizen journalist determined to document the horrors of the war. She taught herself how to film – and started filming the human suffering around her as Assad forces battled rebels for control of Aleppo. She stayed through the devastating siege – documenting the terrible loss of life and producing some of the most memorable images of the six-year conflict. When she and her family were evacuated from Aleppo in December 2016 she managed to get all her footage out. Waad lives in London with her husband Hamza and two daughters.

Hamza al-Kateab is a Syrian doctor and human rights activist. From 2012 until December 2016, he worked as a doctor in eastern Aleppo, an area controlled by the Syrian opposition — serving as the director of Al Quds hospital, the last remaining medical facility in the rebel-held zone. In September 2016, he started a petition on Change.org calling for world leaders to prevent impending disaster in Aleppo that was published by newspapers around the world and garnered more than 750,000 signatures. After being forcibly displaced out of Aleppo in 2016, he moved to Turkey, where he worked for an NGO called Syria Relief and Development as a health coordinator. As part of his role, he represented the organization in the Sexual and Reproductive Health working group conducted by the United Nations Population Fund, preparing and reviewing policies and protocols related to reproductive health in facilities inside Syria.

Edward Watts is an Emmy award-winning, BAFTA nominated filmmaker who has directed over twenty narrative and documentary films that tell true stories of courage, heroism and humour from across the world, covering everything from war crimes in the Congo to the colourful lives of residents in the favelas of Rio de Janeiro. His 2015 film Escape from ISIS exposed the brutal treatment of the estimated 4 million women living under the rule of the Islamic State and, for the first time on television, told the extraordinary story of an underground network trying to save those it can. It received numerous international awards and citations, including an International Emmy and Bafta nomination for Best Current Affairs Documentary. Among his other work, his first narrative short film Oksijan told the incredible true story of a 7- year-old Afghan boy’s fight to survive as he is smuggled to the UK in a refrigerated lorry and the air inside begins to run out. It premiered at the BFI London Film Festival in October 2017 and has since played at prestigious film festivals around the world.

Charles Lister (moderator) is a senior fellow and director of the Countering Terrorism and Extremism program at the Middle East Institute. His work focuses primarily on the conflict in Syria, including as a member of the MEI-convened Syria Study Group; and on issues of terrorism and insurgency across the Levant. Prior to this, Lister was a visiting fellow at the Brookings Institution in Qatar and a senior consultant to the multinationally-backed Syria Track II Dialogue Initiative, where he managed nearly three years of intensive face-to-face engagement with the leaderships of over 100 Syrian armed opposition groups. Lister is a frequent source of briefings on the Syrian insurgency to political, military and intelligence leaderships in the United States and across Europe and the Middle East.