1,500 Years of Contact between Korea and the Middle East 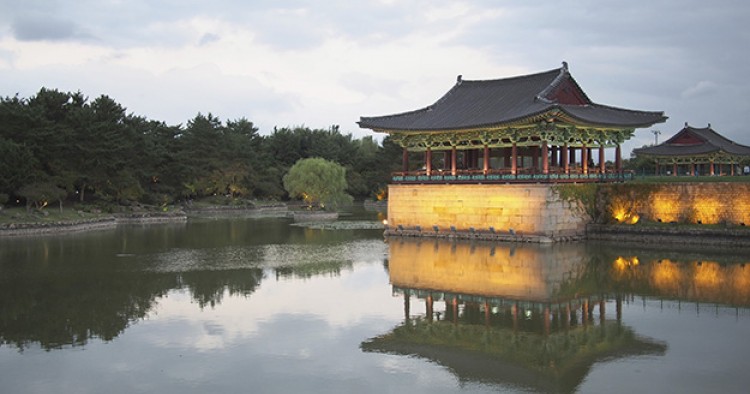 Contrary to popular belief, Islamic history in Korea and Korea-Middle East relations predate the Korean War by more than a millennium. Striking artifacts from the fourth and fifth centuries allude to an ancient history of commercial and political relations between Korea and the peoples of the Middle East, which continued after the birth of Islam. Although the exact date of the arrival of the first Muslims in Korea has not yet been determined, relations between Korea and the Islamic world can be traced to the middle of the ninth century, when Ibn Khurdadhbih mentioned the ancient Korean kingdom of Silla in his Kitab al-Masalik wa-l-Mamalik.

Despite Korea’s long history of close cultural and commercial relations with the Middle East, many Koreans still harbor an image of Islam and Arabs that is far from positive. Misconceptions about certain aspects of Islam—such as polygamy, the status of the Prophet Muhammad, attitudes toward violence and terrorism, human rights, and the role of women—are widespread, and have even found their way into some Korean school textbooks.

It may be hard to believe that a fifteenth-century Muslim leader recited verses from the Qur’an as he wished the Korean king a long life and prosperous nation; that the traditional Korean lunar calendar was likely influenced by Islamic calendar science; or that there was a grand mosque in Gaegyeong, the capital city of the thirteenth-century Goryeo kingdom. Yet all of these historical circumstances are cited in reliable Korean and Islamic sources. This essay introduces the 1,500 years of contact between Koreans and the Middle East based on a brief historical survey from the fifth century to the present.

Long before the advent of Islam, Korea and the Middle East had already established trade relations by sea and overland routes such as the Silk Road. Written references are few and far between, but there is sufficient documentation to demonstrate the existence of significant commercial ties. One example is the discovery of Roman and Persian glass cups in the ancient tombs of Gyeongju, capital of the Silla kingdom. In addition to specimens of conventionally cut glass, the bottle unearthed from tomb 98 shows the typical manufacturing technique of Sassanid Persia. 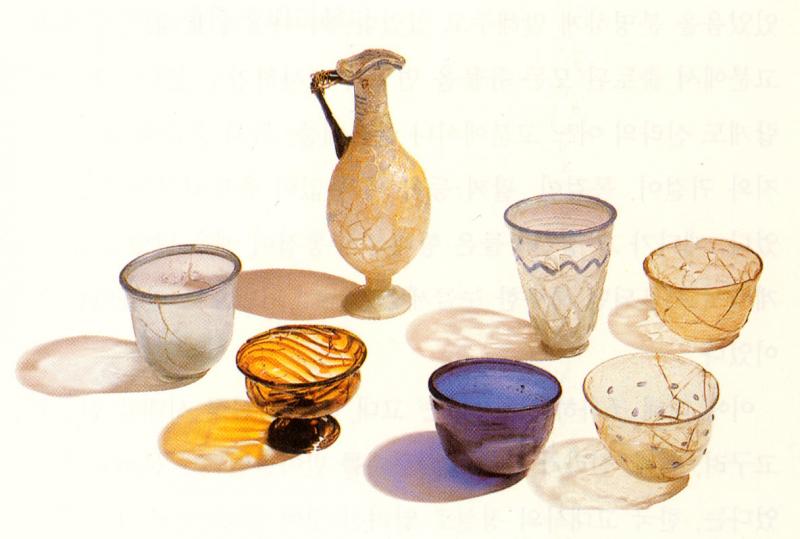 Assuming that the tomb was constructed in the fifth or sixth century, it can safely be said that Persian merchandise had already found its way into Korea and was being used by Koreans.

Other items uncovered during the excavation include a silver bowl engraved with an image of the Persian goddess Anahita; a golden dagger from Persia; clay busts; and figurines portraying Middle Eastern merchants. Samguk Sagi—the official chronicle of the Three Kingdoms era, compiled in 1145—contains further descriptions of commercial items sold by Middle Eastern merchants and widely used in Silla society.

The influence of Sassanid culture was profoundly felt in other ways as well, most notably in the fields of music, visual arts, and literature. The popularity of Iranian designs in Korea can be seen in the widespread use of pearl-studded roundels and symmetrical, zoomorphic patterns.

An ancient Persian epic poem, the Kushnameh, contains detailed descriptions of Silla. According to the 2014 book Kushnameh in Korea, a Sassanid prince named Abtin immigrated with his subjects to Silla. Abtin married a Silla princess named Frarang and contributed substantially to Silla society.

With the birth of Islam, Korean-Muslim cultural contact accelerated, and commercial relations were further strengthened. Encounters between Korea and Islam are thought to have started as early as the middle of the seventh century and have continued until recently without generating much conflict or antagonism. In spite of these facts, the understanding of Islam in Korean society has been neglected due to a lack of scholarship in the field.

Direct contact between Muslims and Koreans on the Korean Peninsula is described in 23 Islamic sources written between the ninth and sixteenth centuries. These documents include writings from eighteen Muslim scholars, including Ibn Khurdadhbih, Sulaiman al-Tajir, Mas‘udi, and others. Ibn Khurdadhbih was the first Arab scholar who chronicled Muslim settlement in Korea during the Unified Silla era (661-935):

... Silla is located to the extreme end of China and as a white race, Silla people are descendants of Noah’s son Japhet and Japhet’s son Amur...Silla is a country abounding in gold. Muslims who advanced there, captivated by its congenial surroundings, tend to settle there for good and do not think of leaving the place. (845 AD)

The writings of Dimashqi, al-Nuwairi, and al-Maqrizi are particularly worthy of attention. They relate the surprising story of a group of Alawis (the followers of Ali) who sought refuge on the Korean peninsula after fleeing persecution during the Umayyad Dynasty (661-750). The Alawis are known to have travelled as far as the southeastern coast of China. According to the mid-seventh century chronicle of Nureddin Muhammad al-Awfi, a great number of Shi‘a formed their own community in allegiance to Ali on Hainan Island, located south of China. The presence of this settlement raises the possibility that some of Ali’s followers could have advanced as far as the Korean peninsula in search of a more peaceful existence.

During the Mongol Empire and the Yuan dynasty that succeeded it, many Central Asian Muslims moved to East Asia. Through the revitalized Silk Road, high-level Islamic culture was introduced into East Asia. Yuan China benefited greatly from Islamic astronomy, medicine, calendar science, architecture, and weaponry. At the same time, during the Goryeo dynasty (918-1392) in Korea, many Muslims settled permanently and were assimilated into Korean society. They came to Korea with their Mongol masters for official purposes, as traders, or as private immigrants. One example of a Muslim’s integration into Korean society is the case of a man named Samga. Of Uighur descent, he married a Korean woman and is now recognized as the progenitor of the Jang clan of Doksu, whose descendants continue to prosper in present-day Korea.

Muslims in the late Goryeo and early Joseon (1392-1910) dynasties formed their own communities, which allowed them to preserve their cultural customs, traditions, and religious rituals. The members of these communities owned shops that sold products from Muslim lands, and even built mosques called yegungs (ceremonial palaces). Some Muslim leaders achieved so much status that they were invited to attend court ceremonies, into which they incorporated their own religious rituals, including the recitation of the Qur’an. In addition, several Islamic scientific achievements, such as the lunar calendar, were widely disseminated throughout China and Korea. However, this openness would not last. After 1427, the Joseon dynasty issued a royal decree that prohibited the performance of Islamic rites and the wearing of traditional dress. As a result, Muslim settlers in Korea gradually shed the attire, customs, and rituals that had shaped their group identity for 150 years.

The Modern Muslim Community in Korea

Islamic activities in pre-modern Korea began in the 1920s, when Russian Turks fleeing the Bolshevik regime came to Korea. Around 250 Russian Muslims, mostly Kazan Turks, established permanent settlements in Korea, with their own schools, mosques, and cemeteries. Many supported themselves through profitable regional trade with Manchuria, Korea, and Japan. However, due to the social disorder that befell Korea in the aftermath of the Japanese withdrawal in 1945, most of these Turkic settlers left for other countries.

The contemporary Muslim community in Korea was established in the 1950s by Turkish Muslim soldiers who had participated in the Korean War. In addition to carrying out their military duties, they also propagated their religion and inaugurated a new era for Islam in Korea, with the result that Islam gradually spread in Korea. In the mid-1970s, Islam witnessed a period of rapid development in Korea when a number of oil-rich Arab states extended generous assistance to Korean Muslims. The Seoul Central Mosque and Islamic Center, built in 1976, has become a symbol of Korean-Arab cooperation and Muslim society in Korea. At present, there are 11 mosques in Korea attended by roughly 40,000 local Muslims and 100,000 foreign Muslims.

The examples of cross-cultural contact described in this essay reveal a number of interesting aspects of Korea’s 1,500-year relationship with the Middle East. Contrary to the commonly-held belief that Islam was introduced to Korea during the Korean War, Islamic cultural influence in the peninsula has a much longer history. Increased awareness of these historical ties would provide Koreans with an enhanced understanding of the place of Islam in Korean society as well as Middle Eastern affairs more broadly.

In light of the significant economic ties that link Korea to the Middle East today, there is a growing need for Koreans to learn more about these historical and cultural patterns. Korean academicians could—and should—do more to help balance the commercial aspect of this relationship by encouraging a deeper understanding of the history and culture of the Middle East. Doing so would provide a stronger foundation for more substantial cooperation in the years to come.