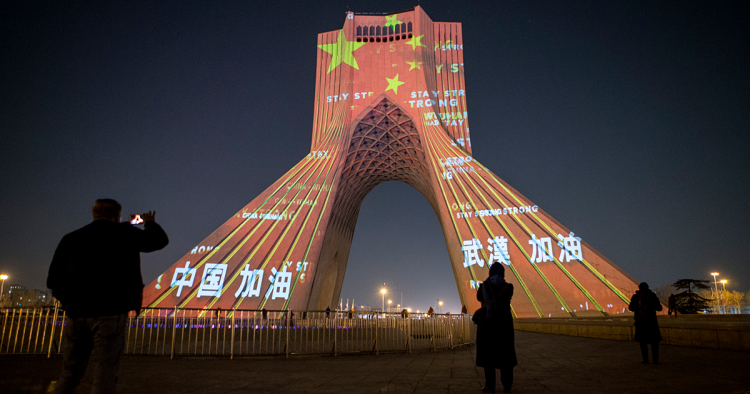 The 25-year strategic cooperation agreement between Iran and China, signed in March 2021, is coming to fruition, sparking debate among Iranians about the potential effects of deepening ties with Beijing. For more than a decade now, inexpensive Chinese goods have flooded Iran’s storefronts, putting local manufacturers and artisans out of business. Thanks to this accord, China now has its deepest ever foothold in Iran, and many Iranians say it has “sold Iran to China.”

The Islamic Republic’s leadership has isolated Iran from the world to the point of economic ruin. The Iranian leadership’s diplomatic tactlessness, hateful rhetoric, human rights violations, and funding of proxies across the Middle East have left the country with almost no strategic allies. Iran’s ruling clergy has increasingly turned its sights toward China in search of economic, political, and technological support. Beijing in turn sees Tehran’s economic desperation as an opportunity to capitalize on Iran’s limited bargaining power, while empowering a similarly authoritarian regime.

For its part, Iran provides China with large quantities of heavily discounted oil — a reported 18 million barrels in November 2021 alone. “Instead of hard cash, China is bartering for Iranian oil with cheap consumer items,“ observed a Tehran-based expert in Sino-Iranian trade. China has found a market in Iran for low-quality consumer goods, ranging from vehicles to homewares. For instance, Chinese auto manufacturers Chery Motors and Geely are finding it easier to compete with higher-quality Western-made vehicles. As a result of sanctions, European vehicles and parts are no longer easy to come by and they cost more. Chinese home products are also substantially cheaper: For example, Chinese plastic placemats produced in a factory can cost as little as one-fifth the price of their traditional hand-crafted Persian equivalents. Iranians hard hit by sanctions, inflation, and economic mismanagement, as well as the effects of trade agreements with China, are often forced to purchase the cheaper goods, with which local manufacturers simply cannot compete. 2,500 years of Persian heritage risks being wiped out in a matter of just 25 years. As a result, Iranians have developed a disdain for China and a sense of betrayal by their own leaders.

The Islamic Republic’s leadership touts Chinese investments as a great opportunity for both nations. The vast majority of Chinese projects, however, rely largely on Chinese companies, labor, and raw materials. Thus, China, not Iran, profits. The same 25-year accord, hailed by leadership as a win for Iran, includes economic, military, and cybersecurity cooperation. It also brings China’s Belt and Road Initiative (BRI) along with it. BRI is a massive and controversial Pan-Eurasian infrastructure project with a questionable track record of “debt-trap” diplomacy to ensnare developing countries. As a result, China has become Iran’s top trading partner and a lifeline for its leadership, helping it to deploy whatever means necessary to stay in power.

Per the agreement, China will provide Iran with new technology that can be used to oppress and surveil. State surveillance will surely expand, and no Iranian is beyond its reach. Since 2010, Iran has improved its systems of oppression to combat rising dissent and widespread protests. According to a Reuters report, Chinese telecommunication company ZTE has sold a “powerful surveillance system capable of monitoring landline, mobile, and internet communications” to Iran’s state-controlled telecommunications agency. In addition, China also provides Iran instruction in subjects like “manipulating public opinion.”

The Chinese and Iranian governments portray surveillance as necessary for keeping citizens safe from crime and terrorism. In reality, more often than not, the two countries use it to terrorize their own citizens. Iranians worry that China’s increased presence and influence could lead to further infringement of human rights. China’s model for systematic oppression, combining legislation with technology to regulate the internet domestically, has served as a roadmap for Iran.

Domestically, China is building a techno-surveillance authoritarian state, according to cybersecurity expert Robert Potter. China completely controls what its citizens see online — an information monopoly dubbed “The Great Firewall.” Following China’s lead, Iran’s parliament is set to pass the “Cyberspace Users Rights Protection and Regulation of Key Online Services Bill.” This bill is part of an ongoing plan to restrict internet use and allow the Islamic Republic to gather and store citizens’ data. These efforts expand on the existing “National Information Network,” which blocks foreign websites in Iran. Both regimes have adopted the “social credit system,” a political control scheme to punish or reward citizens based on their finances, behavior, and activities. Standard punishments include financially crippling fines, lost health benefits, and travel bans.

China’s human rights abuses distress many Iranians, who already fight for their most basic freedoms. Documents leaked by an anonymous Chinese official reveal that China employs surveillance technology, combined with legislation, to commit crimes against humanity. China detains millions of Muslim Uyghurs in more than 1,000 camps, the largest forced concentration of people based on religion or race since the Holocaust. Tiandy, a Chinese tech company linked to the repression of Uyghurs, now sells its wares to Iran’s government, military, and intelligence agencies. China’s Huawei, linked to North Korean state surveillance, will provide Iran with 4G and 5G networks. Beijing regularly offers its technology to low-transparency clients, both government and private sector.

Chinese involvement in Iran’s cyber infrastructure endangers Iranian security, as Chinese tech companies amass user data from millions of people outside their jurisdiction on behalf of Beijing’s intelligence services. Chinese tech companies deny all allegations, but in reality, they cannot legally withhold data from their government. Article 7 of the Chinese National Intelligence Law requires organizations and citizens to “support, assist, and cooperate with the state intelligence work.” China can access Iran’s business, intelligence, and military communications through Chinese-built cyber infrastructure.

The popular perception in Iran is that the 25-year strategic agreement with China will only strengthen the Iranian regime by helping it to impose new oppressive measures, control information, spread propaganda, and spy on dissidents and their families. What’s more, in return, Beijing will continue to kill off Iranian craftsmanship with a flood of inexpensive goods and destroy the environment with white-elephant infrastructure projects that profit China rather than Iran.

Ghazal Vaisi is an Iranian-born international affairs analyst focusing on China. The views expressed in this piece are her own.