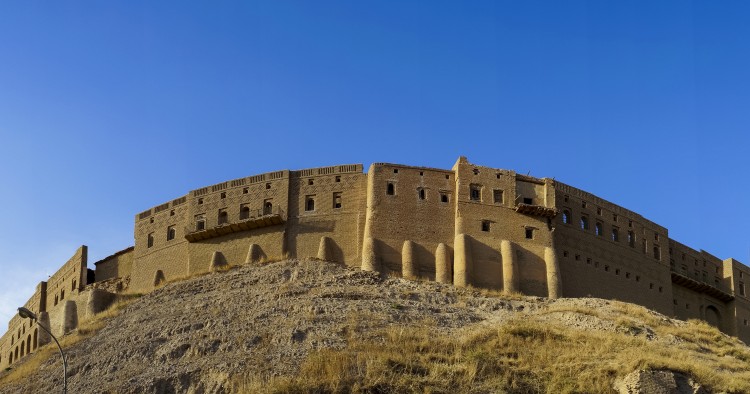 The history of Erbil’s citadel reads like a cinematic epic worthy of Cecil B. DeMille

Possibly one of the world’s oldest continuously inhabited human settlements, the citadel is built on a series of archaeological layers crowned by Ottoman-era houses. It may have been the site of a temple to Ishtar, was an important center of Nestorian Christianity, and survived both the 13th-century Mongol invasion and an 18th-century siege by Nader Shah. It was home to the Medians and the Assyrians (who called it Arbela), Muslims and Jews, and has housed Sufi shrines and displaced squatters. Its mound-like form has been shaped by successive generations of inhabitants and invaders who simply built on top of the rubble of their predecessors.

Its very soil sings the song of humanity, so it was only fitting that it should be inscribed as a UNESCO World Heritage site in 2014, after seven years of meticulous documentation and preparation led by Dara Yakubi, head of the High Commission for Erbil Citadel Revitalization (HCECR), and May Shaer, a consultant for the UNESCO World Heritage Center.

But history, as they say, has a funny way of repeating itself.

“When we inscribed the citadel as a World Heritage site,” explains HCECR chief architect Ranan Tawfiq, “it was the exact time that Daesh [ISIS] invaded Iraq.” While the peshmerga, the Kurdistan region’s military force, succeeded in saving Erbil from the latter-day invaders, the economic crisis that engulfed the whole region took its toll on rehabilitation efforts.

“We’d been working since 2007 to fulfill the requirements to nominate the citadel for the World Heritage status,” recounts Tawfiq, an Iraqi Kurd from Sulaymaniyah who trained at the University of Baghdad, from her office, a restored two-story Ottoman-era house. “We prepared all the studies for the management plan, including a comprehensive survey of all the houses, all the layers of the built heritage of the citadel, and its relationship to the urban fabric of the city.”

This was no mean feat, as the Citadel of Erbil, the fourth site in Iraq to be included on the World Heritage List, after Ashour, Hatra, and Samarra Archeological City, sits atop a 32-meter-high mound and extends out over 10 hectares. The remaining built environment includes traditional courtyard houses with distinctive ornate patterns made of oven-fired brick, as well as a mosque, hammam, and other historic sites.

So, when the 2014 ISIS invasion and subsequent financial crisis slashed funding from the Kurdistan Regional Government, there was a race against time to preserve existing work. “We never stopped,” Tawfiq says, “but we were limited in what we could do,” with preservation efforts being reduced to covering fragile houses with plastic sheets during the rainy season.

“The situation is better now economically, so more people are donating.”

Our interview is interrupted twice by calls from a local oil company magnate who has promised to fund the rehabilitation of a single house in exchange for name plate recognition.

The U.S. Embassy is “generously funding two projects,” Tawfiq says: repairs to the old hammam that will allow it to reopen as a functioning bath house, and the restoration of a complex of three buildings that will become a children’s interpretation center.

The French government was one of the early investors in rehabilitation projects at the citadel, with its restoration of the Shihab Chalabi house that began in 2011. The structure’s alabaster archways now herald the entrance to the offices of the Institut Francais du Proche Orient. It’s located in a cluster of seven villas belonging to the Chalabi brothers, including the Salih Chalabi house that is now home to the Erbil Citadel Cultural Center, which hosts performances and art exhibitions adjacent to a 1930s-era residence repurposed as the Kurdish Textile Museum.

But things really started to look up for the project last August when the EU signed an agreement with UNESCO and the HCECR for a 5 million euro contribution to rehabilitate historic buildings in and around the citadel, support cultural activities, and provide training in heritage management and tourism to generate employment opportunities for the local community and internally displaced people.

Then, in November of 2019, the prime minister of the Kurdistan region, Masrour Barzani, visited the citadel and pledged a yearly donation of $500,000 to be used for conservation, management, and administration.

But there are many challenges ahead, and Tawfiq is aware that the preservationist’s road to hell is paved with good intentions. As many previous unfortunate demolitions and reconstructions demonstrate, some interventions did more harm than good.

In 1960, the northern entrance to the citadel was opened to allow cars into the site, and with it a gravel road, which required demolishing dozens of traditional houses that had been bisected by narrow alleyways.

Also in 1960, the south-facing gate, believed to be in danger of collapse, was completely destroyed, with a façade built in its place in 1979, during the Saddam Hussein era, in an incongruous neo-Abbasid, neo-Babylonian style.

In 2014, the 1979 intervention was replaced by a recreation of the original gate, painstakingly reimagined from old photographs, oral histories from former residents of the citadel, and aerial images taken by the British air force.

Rather incredibly, the original mosque on the site, where former residents of the citadel still gather to pray on Fridays, was irrevocably “modernized” as well. Its 23 different-sized domes were replaced by the current single one in 1959, but the original minbar remains intact.

Tawfiq says that great sensitivity is needed to restore the 500 plots and 220 houses on the site slated for rehabilitation.

“The first step is stabilization,” she notes, “and then services. But it’s not easy. You need to make the correct decision and simplify things so as not to disturb their spirit.”

With ambitious plans underway for up to 20 percent of the site to be slated for residential use for government workers as well as new cultural tourism infrastructure including art galleries, cafes, restaurants, and boutique hotels, this could be a challenge.

While balancing the needs of historical preservation with tourism will be a delicate act, the citadel is nothing if not a survivor. As an exciting new chapter unfolds in the World Heritage Site’s epic journey, 6,000 years’ worth of historical spirits will be watching its new guardians with observant eyes.

Don’t miss the final week of MEI's show of contemporary Kurdish art, “Speaking Across Mountains: Kurdish Artists in Dialogue,” up through February 25.