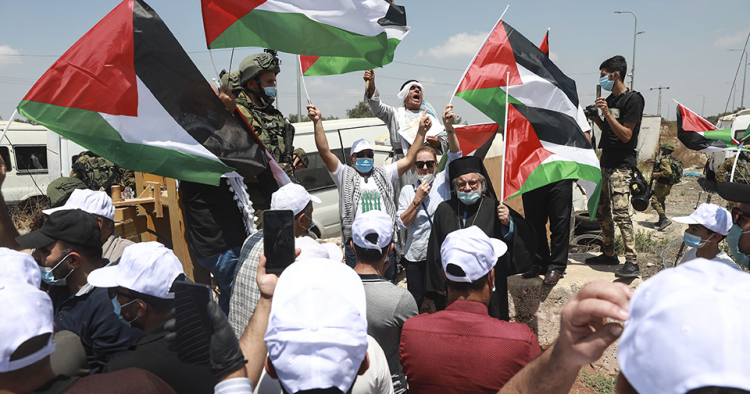 Aug. 13, 2020 will be remembered by Palestinians as another Naksa, or “setback.” This is the term used by Arabs to refer to Israel's stunning military victory in 1967, in which it took control of the Palestinian-inhabited West Bank and Gaza Strip, along with Egypt’s Sinai Peninsula and Syria’s Golan Heights. Much like the Arab defeat of 1967, the agreement signed yesterday by Israel and the United Arab Emirates (UAE), in which the two countries agreed to a “full normalization of relations” in return for Israel suspending moves to formally annex parts of the West Bank, has reminded the Palestinians that they cannot count on the Arab states to deliver their freedom or safeguard their rights.

The agreement has been condemned by Palestinians across the political spectrum. A spokesperson for Palestinian President Mahmoud Abbas called it “treason” and demanded it be reversed, while Hamas described the agreement as a “stabbing in the back of our people.” Palestine Liberation Organization (PLO) Executive Committee member Hanan Ashrawi expressed the Palestinians’ sense of betrayal to UAE Crown Prince Mohammed bin Zayed (MBZ) via Twitter: “May you never experience the agony of having your country stolen; may you never feel the pain of living in captivity under occupation; may you never witness the demolition of your home or murder of your loved ones. May you never be sold out by your ‘friends.’”

The UAE-Israel deal came as a shock but not a surprise. The normalization process between the two countries has been transpiring under Palestinians’ noses for some years now, with the exchange of official visits (in 2018 and 2019) and unofficial security and intelligence cooperation.

Many winners but one clear loser

There are many winners in this political maneuver. For one, the UAE can now move forward openly with its security partnership with Israel in pursuit of their common regional interests, particularly in terms of confronting the threat from Iran. For its part, the UAE claims it has helped the Palestinians by thwarting Israeli plans for annexation and rescuing a two-state solution — even as Israeli Prime Minister Benjamin Netanyahu has vowed to move ahead with annexation anyway. The UAE is not the first Arab state to use the Palestinians as a fig leaf for its dealings with Israel, and in reality the de facto annexation of West Bank territory has been happening for many decades and could have been avoided easily with a decision in Washington or Jerusalem.

The deal also gives Netanyahu a much-needed boost. He has a knack for making strategically timely choices to preserve his rule, and at the moment he needs all the help he can get as he is facing trial on various corruption charges as well as daily protests outside his home over his poor handling of the coronavirus pandemic.

As for the current U.S. administration, despite its open hostility to the Palestinians and the still-born “Deal of the Century,” the agreement provides the embattled Trump presidency with a tangible and seemingly historic diplomatic achievement, as well as bragging rights ahead of November’s election. In his statement, Donald Trump declared that “it was much easier to negotiate this deal with Israel and UAE than negotiate with the Democratic party!”

The biggest losers in all of this, of course, are the Palestinians and their leaders.

Having long ago lost faith in the promises and pledges of neighboring Arab states, ordinary Palestinians will now direct their disappointment toward their leadership who allowed this deal to happen. For years now, Palestinian leaders have lamented the catastrophic impact of the Oslo Accords on the prospects for achieving a just and meaningful resolution. The accords weakened regional support and spurred Arab countries, notably the Gulf states, to normalize relations with Israel.

Palestinian leaders knew where the wind was blowing but have again failed to change its direction. They failed to create partnerships and strategic regional collaborations that could have led to a different outcome.

What’s next for Palestinians?

Palestinians have been aware of their leadership’s flaws for years, and that is why they are constantly calling to elect a new one. Several groups, campaigns, and initiatives have been working in parallel to discuss what is next for Palestinians. For them, the answer is clear: It is not about blaming outsiders for looking out for their own interests, it lies inwards — in the unity of all Palestinians in historic Palestine, in the West Bank, Gaza, and in the diaspora. It lies in electing a new Palestine National Council for all Palestinians and generating the momentum to democratically elect a new leadership of the PLO, one that represents the aspirations of the people.

In contrast to what many analysts have said, the Palestinian people did not truly lose. In reality, they win every day by staying on their lands, by not disappearing, and only because of their steadfastness and resilience. They have survived the Naksa, the ongoing de facto annexations, and the various wars, and they will survive this too. There is a window of opportunity for Palestinians now. This must serve as a wake-up call for the current leadership to step aside and make way for the next generation, one that reflects the wishes of millions of Palestinians and their quest for freedom and self-determination. While the current leadership may have been abandoned by the White House and its Arab allies, the Palestinians have not abandoned their demands for freedom and justice.

Dr. Carol Daniel Kasbari is a social scientist with 20+ years of experience designing and leading programs in the field of conflict mitigation, peacebuilding, advocacy, and nonviolent resistance in very complex international environments focusing on the MENA region and Europe. She is a Non-resident Scholar with MEI's Program on Palestine and Palestinian-Israeli Affairs and teaches as an adjunct professor at the School for Conflict Analysis and Resolution (Carter School) at George Mason University in Virginia. The views expessed in this piece are her own.