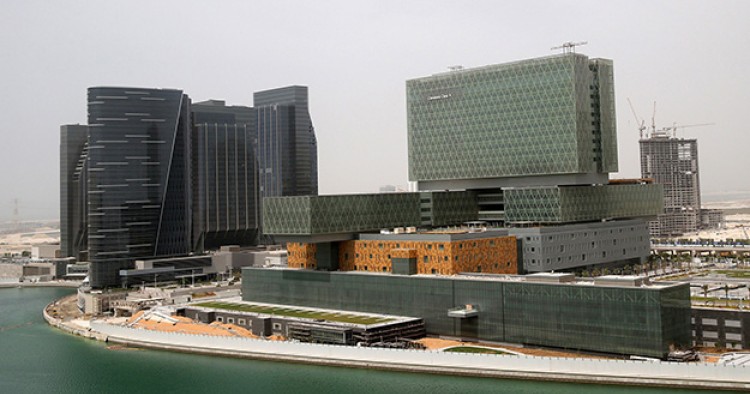 Most outsiders know the United Arab Emirates from Dubai’s accomplishments in international commerce, tourism, and indoor skiing. What is less known is that Abu Dhabi is investing a great deal of money in education, medicine, art, and music as a new kind of cultural diplomacy.

New York University, for example, has a branch campus in Abu Dhabi—NYUAD—where 600 students from over 100 countries learn together under the watchful eye of American and other expat faculty, and with strict quality control from the New York campus. The university will soon move to a new campus on Saadiyat Island, which is attached to the coast by a causeway, just in time for commencement speaker Bill Clinton to celebrate its first graduating class. A branch of the Guggenheim Museum is also being built on Saadiyat. It will be the largest Guggenheim in the world and will showcase pieces from the Guggenheim Foundation collection. The Cleveland Clinic Abu Dhabi is nearing completion as well. The ultra-modern facility will be almost as large as the one in Ohio, and when it opens later this year it will employ more than 200 doctors, mostly from the United States, and 600 nurses, with a total staff of 2,500.

The Abu Dhabi government pays for these institutions, while the foreign institutions provide trained personnel and some management. Professional salaries, housing, and other allowances and benefits for expatriates are generous and are borne 100 percent by the emirate’s shaikhs.

This business model extends into other aspects of culture. During the month of March 2014, the Abu Dhabi Music and Arts Festival (ADMAF) sponsored a series of new and impressive public programs. The American opera singer Renee Fleming, the American pianist Herbie Hancock, and the American Ballet Theater group performed before sold out audiences. Non-American and world-famous musicians also performed, including the European Youth Orchestra under the baton of Vladimir Ashkenazy, the classical guitarist Milos Karadaglic, and the Simon Bolivar Orchestra of Venezuela, conducted by Gustavo Dudamel. Most of the cost was covered by the Abu Dhabi shaikhs, with some help from private donors in the Gulf and elsewhere.

It appears that Abu Dhabi has become an educational, medical, and cultural hub, but why?

For one, the emirate’s leadership views the substantial expenses that make these projects possible as investments in Abu Dhabi’s development for the benefit of the Emirati public. Through such projects, Emiratis have the opportunity to study at first-rate universities, receive excellent medical care, and enjoy international culture. The leadership also believes that it is promoting tolerance and international understanding for both its citizens and visitors through these activities. For instance, the Guggenheim will specialize in Middle Eastern contemporary art as well as Western art. The ADMAF organizers were also careful to ensure that the events were bicultural. When Renee Fleming performed, her program included an accomplished Emirati singer. And before the European Youth Orchestra played, a large group of Emirati children appeared in the concert hall, playing drums and performing traditional local dances. Finally, before Milos Karadaglic gave his recital, two Emirati girls gave a professional recital on the oud and the qanun (Arab zither), two traditional Arab instruments.

In this way, Abu Dhabi’s government-sponsored cultural diplomacy does not resemble the U.S. model, in which the government promotes its own country’s culture elsewhere in the world, though American cultural diplomacy also benefits American citizens (American Fulbrighters learn about foreign cultures, for example). The Abu Dhabi model is more concerned with providing bicultural experiences and opportunities for its citizens within the emirate.

The term cultural diplomacy is familiar to American diplomats and others who have implemented programs under that name for decades. In the United States, it goes back to 1938, when the Department of State established the Division of Cultural Relations that worked with American academics to provide cultural programs to Latin America. The Smith-Mundt Act endorsed international cultural programs in 1948. Since then, the U.S. Information Agency and the Department of State’s Bureau of Educational and Cultural Affairs have regularly promoted cultural diplomacy.

While the Cleveland Clinic, New York University, and the Guggenheim Museum, as well as the performances of Renee Fleming, Herbie Hancock, and the American Ballet Theater, serve U.S. interests by projecting American culture abroad, these institutions and events do not amount to American cultural diplomacy since they are organized, sponsored, and paid for by the Abu Dhabi rather than the U.S. government. In fact, funding for American cultural diplomacy has declined since the early 1990s because the end of the Cold War persuaded the administration and Congress that it was no longer as necessary.

Yet some U.S government cultural diplomacy programs continue abroad. The U.S. embassy in Abu Dhabi, for example, still finances and supports educational programs by giving Fulbright exchange grants, by providing educational counseling free of charge, and by sponsoring some cultural programs such as art exhibits and visiting American professionals who give presentations and workshops. In addition, the private NGO AMIDEAST carries out English teaching, administers a wide variety of educational tests for Emiratis, and organizes other cultural diplomacy programs. But these are separate from and parallel to the activities described above that the Abu Dhabi authorities sponsor.

The Abu Dhabi government has therefore taken on a major role in cultural diplomacy that is new in the Middle East, and the motivations for it are different than those behind American cultural diplomacy. This new type of cultural diplomacy does not mean that the Emiratis are exporting their culture abroad, but instead they are sponsoring major international cultural projects at home. While the shaikhs aim to benefit the Emirati public, they are also trying to use foreign culture to put Abu Dhabi on the map as an international player and to demonstrate tolerance, sending a message that the UAE not only welcomes foreign businesses but also other kinds of foreigners. In the process, this strategy benefits America’s image in the Gulf.