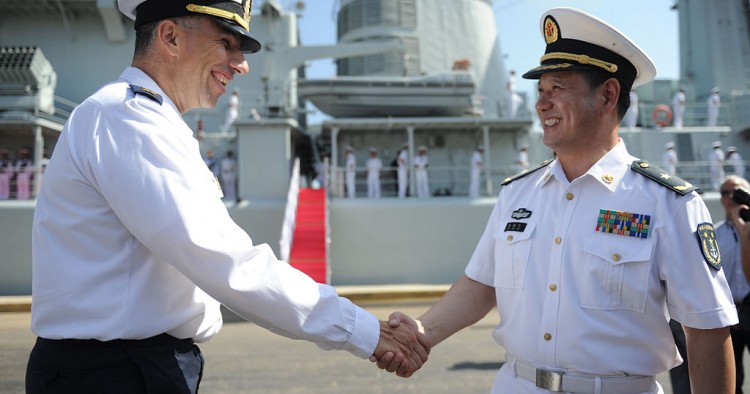 Much has been written about the Sino-Israeli relationship, mainly regarding political and economic ties.[1] However, the security dimension of the relationship has received comparatively less attention.[2] This article discusses Sino-Israeli security relations in an effort to shed light on their roots, substance and prospects despite Israel’s commitment to its relations with the United States.

The security ties between China and Israel began after the June 1967 War. At that time, the Israeli Defense Forces (IDF) found itself holding vast stockpiles of Soviet-made weaponry, which it had captured from the defeated Arab militaries and was looking for a country to export it to. Chinese military equipment was also Soviet-made, and secret talks began between the Chinese and the Israelis.[3] In February 1979, a top-secret delegation of Israeli defense officials arrived at a military base on the outskirts of Beijing. The man leading the effort was Saul Eisenberg, a Jewish billionaire who had fled to Shanghai from Europe after the Holocaust. Eisenberg had later built a financial empire in East Asia, becoming one of the first Westerners to do business in China and other Asian states. He used his ties to interest China in Israeli weaponry and even donated his private plane to transport the Israeli delegation on that maiden flight to Beijing. Eisenberg was familiar with Israeli weaponry from previous deals throughout Asia. According to Amir Bohbot and Yaakov Katz, after a series of preliminary meetings with the Chinese, Eisenberg returned to Israel with a shopping list which included missiles, radar, artillery ammunitions and armor and urged that the government send a delegation. The Prime Minister of that time, Menachem Begin, approved sending a delegation but deferred questions regarding the shopping list to Defense Minister Ezer Weizman, whom he ordered to personally approve what Israeli companies could and could not sell to China.[4]

Over the next year, the Israelis made additional trips, some involving undercover flights of Israeli Air Force planes. By then, the Chinese knew they were working directly with the Israeli government. Once China finalized the shopping list, the Israeli delegation brought it to Begin and Weizman for approval. The first shipment of tank ammunitions arrived secretly in 1981 even as the two sides increasingly began to trust each other. Chinese officials refused to come to Israel but agreed to sign hundreds of millions of dollars’ worth of arms contracts, after seeing a couple of photos and an occasional video.[5] According to Peter Berton, Israel modernized and retroﬁtted thousands of Chinese tanks. When the revamped new tanks were paraded on China’s National Day in October 1984 without any mention of their true origin. The secrecy derived mainly from the Chinese side and not the Israel since the former was still not ready to recognize the State of Israel — an act which its results would harm China’s relations with the Middle Eastern countries. Nonetheless, unofﬁcial ties between the two countries continued to develop. By 1990, both countries had unofﬁcial missions in Beijing and Tel Aviv.[6]

According to Shabtai Shavit, former head of Israel’s foreign intelligence service, Israeli Prime Minister Itzhak Rabin conducted his first official travel to China on October 1993, one year after the establishment of the official diplomatic relations. Prime Minister Yitzhak Rabin met with Chinese President Jiang Zemin - the first meeting between the leaders of the two states. During the meeting, Shavit met with his counterparts from the Chinese intelligence service, which was the first official meeting between the two states’ foreign intelligence services. According to Shavit, he argued that China would be a major actor in the international system and told Prime Minister Rabin that Israel should craft a strategy for dealing with China.[7]

During the early years of the 21st century, Israel bowed to American pressure and withdrew from contracts for the sale and repair of military hardware to China. In July 2000, American pressure scuttled signed agreements where payments had already been made by China for its advanced airborne tracking system for the Phalcon reconnaissance aircraft, a deal valued at up to $1 billion. The project was based on Israeli high-tech avionics, which were to be installed in a Soviet-built transport plane in China. The United States objected to this transaction, even though it did not involve transfer of any American technology. Israel had to pay a heavy ﬁne for breaking the contract, and relations with China soured for a number of years.[8] According to the Stockholm International Peace Research Institute (SIPRI), Israel exported to China $356 million worth of weapons between the years of 1990 and 2001. Among these weapons were the Harpy Unmanned Air Vehicles (UAVs) and the Python-3 short-range air to air missiles (SRAAM), which later would be designated in China as PL-8.[9]

In 2004, the United States prevented Israel from returning to China the Harpy UAVs the state-owned company Israeli Aircraft Industries (IAI) had repaired. Here, it is important to note that the United States had not objected to the original Sino-Israeli deal negotiated in the mid-1990s on the Harpy UAVs, which, like the Phalcon, did not incorporate American technology, and initially had not objected to Israel’s agreement in 2003 to a Chinese request to renew its Harpy “spare-part inventory.” By December 2004, however, it was reported that American officials had come to believe that Harpy components were returned to Israel not for spare parts replacement and routine overhaul but for total systems upgrading. The Pentagon reportedly was concerned that American technology would be leaked to the Chinese. Israeli Prime Minister Ehud Barak had promised that China would receive Phalcon technology, leading President Jiang Zemin to make public statements to that promise.[10] Chinese President Jiang lost face over what turned out to be empty promises, thus leading to a substantial diplomatic rift between the Israel and China. The result of Israel withdrawing from these two long-term deals as a consequence of American pressure was a sharp downgrade in relations between China and Israel that has affected security cooperation to this very day.

The Resuscitation of Sino-Israeli Security Relations

It was not until March 2010 that Chinese military officials and their Israeli counterparts resuscitated the security relationship. For the first time, a delegation of Chinese military spokespersons visited Israel. As a result, several months later, on October 2010, an IDF delegation led by Spokesperson Brigadier General Avi Benayahu, headed to China. During the visit, Benayahu spoke to the Chinese about developments in the Middle East and the challenges facing the IDF. The IDF delegation reportedly shared their experiences on subjects such as public legitimacy and fighting in densely populated areas and in the diplomatic arena. The visit also resulted in the decision that officers in the Chinese army would undergo training in the IDF Spokesperson's facilities — the first publicized cooperation between the two militaries since the Phalcon and the Harpy incidents.[11]

In June 2011, Israeli Defense Minister Ehud Barak visited China. It was the first visit of an Israeli defense minister to China in a decade. According to a statement from Barak’s office, he met his Chinese counterpart, Liang Guanglie, as well as other senior defense officials to discuss regional issues, the Iranian threat, advancement of the Israeli-Palestinian peace process and counter-terrorism issues.[12] On May 2012, Israeli Chief of Staff, Lieutenant General Benny Gantz travelled to China and met his counterpart, General Chen Bingde. This visit occurred after the latter’s visit to Israel on August 2011. According to the statement of the Israel Defense Force’s spokesperson unit, both Chiefs of Staff expressed their satisfaction with the cooperation between the militaries and noted their commitment to continue to develop this relationship[13]. On May 2013, it was reported that Israeli Head of Military Intelligence, General Aviv Kochavi, headed to China secretly to meet his counterpart, Major General Chen Youyi, along with other Chinese intelligence officials, in order to present China highly classified intelligence regarding Iran’s nuclear program and Syrian President Bashar Assad’s chances of hanging onto power. He also told them of Israel’s fear that chemical and advanced weapons in Syria, some of them made in China, would fall into terrorists’ hands.[14]

On March 2014, IDF medical corps’ delegation was hosted in an exhibition named “China Med 2014.” The IDF Attaché in Beijing, Colonel Amir Eshel, conducted a closed discussion with Chinese military officials in the medical logistics sector. Among the invitees were the commander of the Israeli Medical Corps and during that meeting three Israeli companies from the medical sector were invited in order to discuss Chinese acquisition options.[15]

Following Ehud Barak’s visit, Chinese Chief of Staff, General Chen Bingde, visited Israel and it was reported that the two states considered cooperation between Israel’s government-owned company, IAI, and China that would focus on civilian aspects of manufacturing aircrafts.[16] Later, on January 2016, IAI announced that it had formed a Joint Venture to cooperate with Lingyun (Yichang) Science and Technology Group Company, to establish its first local Chinese maintenance, repair and overhaul (MRO) enterprise in the Hubei Province. This was the first publicized instance of cooperation between the Israeli and Chinese defense sectors since the Phalcon incident.[17]

The IDF, as well as the Israeli police, reportedly have been using Chinese drones from the Shenzhen-based company Dajiang Innovations (DJI). Those drones have been engaged in non-classified operations as part of the Israeli ground forces; and the IDF, according to the report of Israel Defense, seeks to acquire 200 additional drones as well as spare parts, pending completion of the development of an Israel-made drone.[18] It should be noted that because DJI is a Chinese firm, the Israeli defense ministry, in accordance with its procurement policies, must purchase the drone from private suppliers rather than directly from DJI. Nevertheless, this is the first Chinese equipment to be used by the Israeli security forces.

Recent developments in Sino-Israeli security relations raise questions about how far the security cooperation between the two states can proceed despite the American shadow. The official security meetings between the two states, however, have resulted in a relatively a low level of military cooperation. Furthermore, there is no evidence in the public domain that there has been a change in Israel’s defense export policy. Nevertheless, it seems that even the existing conditions and arrangements can benefit China, which is interested not only in acquiring new military technologies but also in broader knowledge such as conducting counter-terrorism (CT) warfare — an area in which Israel has rich operational experience.

The government of Israel understands the importance of China as a global power and thus seeks to enhance security cooperation. It can be assumed that Israel’s security policy towards China includes some back-channel coordination with Washington so as to avoid causing friction in Israel-US relations and/or a setback in the development of Israel-China security relations. Strengthening security cooperation with China may provide Israel with another avenue of action to advance its efforts against the Iranian nuclear and ballistic missile program. Israel will tryto limit the Chinese transfer of technology and weapons to Iran as well as other states in the Middle East that might fall into the hands of terrorist organizations that could pose a threat to the country.

[1] For more information regarding authors who deal with Sino-Israeli relations, see works by Yitzhak Shichor and Yoram Evron.

[4] Yaakov Katz and Amir Bohbot, “How Israel Used Weapons and Technology to Become an Ally of China,” Newsweek, May 11, 2017, accessed April 5, 2018,  http://www.newsweek.com/china-israel-military-technology-beijing-jerusalem-saul-eisenberg-weapons-607117.